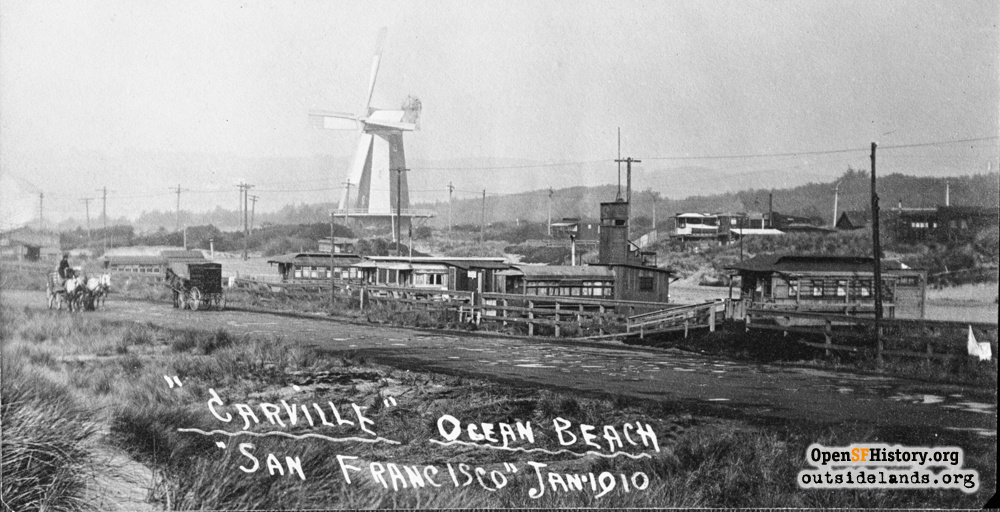 Story of an 1890s beachside community made of old transit cars. 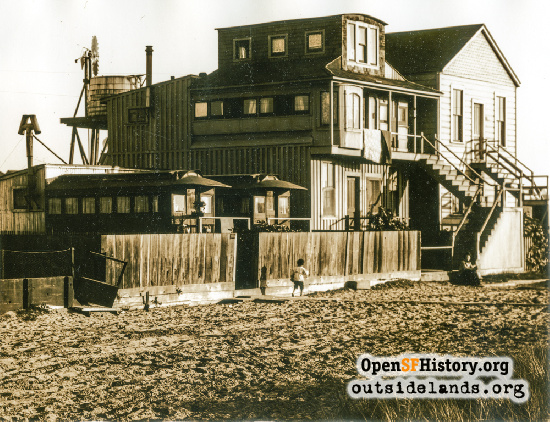 Carville, between Irving and Judah on La Playa; several structures made of old horsecar bodies; three-story building at center., circa 1905 -

"Today, the observer in the old Oceanside district is tempted to see a streetcar in every long, narrow structure and to imagine lines of them hidden in backyards."
---Natalie Jahraus Cowan, 1978

Ah. that's me. For years I've patrolled the Outer Sunset on Great Highway, La Playa, 47th and 48th Avenues, craning my neck over backyard fences, scrutinizing odd buildings and transposing cable car forms upon each one. How can one resist after reading about the famed "Carville," where San Franciscans created homes from abandoned transit cars?

In the 1850s and 60s transit companies used horses to pull railcars on San Francisco streets. When the beasts gave way to progress in the form of cable cars and electric streetcars, the companies sought to dump the obsolete rolling stock. The Market Street Railway Company even placed a newspaper advertisement offering horse cars for $20 (without seats only $10).1

Charles Stahl, a gripman for the Ellis Street line, showed the potential of the abandoned cars. On a lot he purchased at today's 20th Avenue between Judah and Kirkham (then unmarked sand dunes), Stahl connected together three old North Beach & Mission horse-cars he bought for $45. He mounted the edifice on stilts to keep it above the shifting sand, and his family moved into their unique abode in the summer of 1895. 2

In September of that year, the San Francisco Examiner tracked the various uses of recycled cars: backyard children's playhouses, a real estate office, a shoemaker's shop, and out where the Park and Ocean railway line terminated (at 47th Avenue and today's Lincoln Way), a "coffee saloon". This last site is where the seeds of Carville found flower in the beach sand. 3

Adolph and the Colonel

The "founder" of Carville never actually lived in a streetcar. Colonel Charles Dailey made his home in a former realtor's shed, which he expanded with driftwood from the beach and proceeded to decorate with shells and curios washed up from the sea. 4 Dailey, a Civil War veteran and a former government agent in Arizona, was a friend of Adolph Sutro's, and ostensibly chose his eccentric life at the beach for his health. 5 Sutro, in trying to convince people to buy his extensive sand-covered properties, highlighted what wasn't at the beach: "...no smoke, no sewer gas, no decaying matter---nothing to injure the health." 6

Dailey took on three abandoned horse cars from Sutro, rented at $5 a month, and opened one as "the Annex", the aforementioned coffee saloon. In July of 1896, Dailey's ever-expanding shed and the three horse cars were dubbed "Beachside" by a reporter from the San Francisco Bulletin. 7 Sutro preferred the area be called the "South Side" or "Oceanside", hoping to get wealthy men to buy his land for grand estates like his own at Sutro Heights.

But it was the more modest scheme of renting old streetcars that took off. 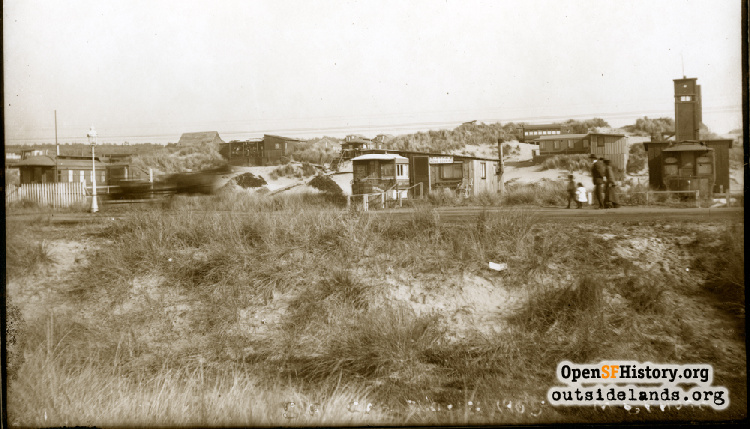 Bohemia in a Horse Car

Reading the magazine and newspaper articles of the time, it's clear that Carville (or occasionally "Cartown") became a fashionable, if quirky, phenomenon.

Bicycling was a raging fad of the day, and a ladies bicycle club named "The Falcons" rented one of the first cars at the beach. They created a cozy clubhouse not only as a refuge to relax in after rides (they took naps on the long, upholstered seats), but as a locale for card games, large dinner parties, and other soirees. 8

Another group of women turned a car into "A Haunt of Bohemia", as the Strand called it. "Thither they betake themselves from Saturday evening to Monday noons. Invitations to the dinner parties which are given there are largely sought."9

Working musicians christened another car "La Boheme" and used it as a retreat when their shifts in the city's cafes and music halls came to an end. Between midnight and seven in the morning, members drank and played the night away, taking nocturnal dips in the icy ocean between rounds. On the walls they posted "pictures of all shapes and sizes, posters, verses, bits of doggerel, photographs, clippings from papers, cuttings, beads, shells and a thousand things." 10

While a majority of the cars were used in a part-time way---as clubhouses, bases for family day trips to the ocean breezes, locations for secret romantic rendezvous, or even hiding places for beleaguered city officials---more permanent residents arrived. By 1901 there were a reported fifty families living in about 100 cars. While many of the renters kept their cars spartan, other occupants brought in all the filigree and ornamentation of a Victorian household. Tea rooms and restaurants opened in old cable cars. 11 Even an Episcopal church arose in the dunes, using "North Beach and Mission cars" for its second floor.12

The Overland Monthly remarked on the home gardens of nasturtiums and pelargoniums.13 Scientific American reported on the ingenious cobbled-together creations (many two-storied) that redefined living space.14 Other articles mentioned the tongue-on-cheek titles residents gave their surroundings: a prominent mound of sand was "Mt. Diabolo", and each other's dwellings became "Castle Chillon" or "Fortress Quebec."15 By 1908, there were complaints that Carville was being ruined by the addition of telephone and electric lines, and the replacing of plank-board pathways between cars with concrete sidewalks.16

Burning the Car Out of Carville

By 1910, realtors finally made progress where Sutro hadn't: people began buying "real" homes in the area. None of Sutro's hoped-for mansions went up, but instead modest cottages arose here and there. Baldwin and Howell recognized the romance of the streetcar suburb while assuring potential buyers its day had passed. Their brochure was headlined hopefully: "From Carville to Real Homes". 17

An "Oceanside Improvement Club" formed, and its members didn't care to have the neighborhood associated with a community of discarded streetcars. In 1913, the club's president, Alexander Russell (an interesting character in his own right who owned a former road house-turned-mansion near Sloat Boulevard), hosted a public burning of the old Falcon Bicycle Club car. In celebration of the Fourth of July (and in the spirit of getting real publicity) he tossed in $10 of fireworks as well. 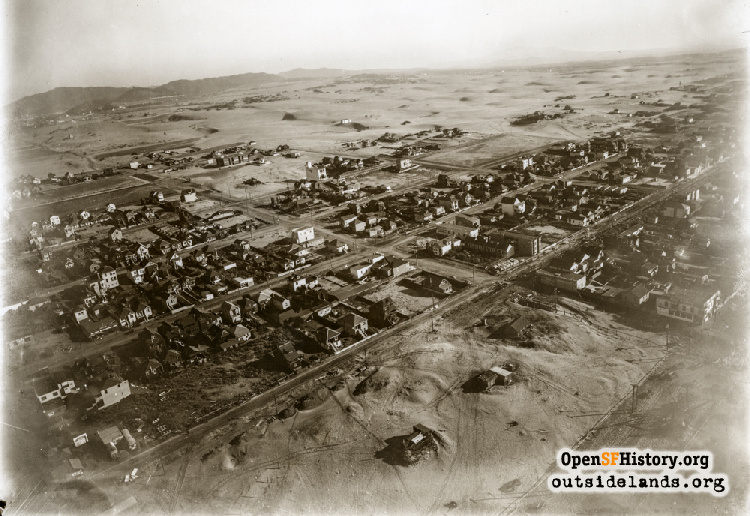 The occasion drew hundreds of people and was meant to show that Oceanside had become a "real" neighborhood. The event's cumbersome slogan was "Make clean today by sweeping and burning up the debris of yesterday." 18

While Carville didn't immediately disappear with the burning, it gradually melted into the neighborhood. As people built more conventional homes, some of the cars were simply hidden in the framework, shingled or spackled invisible. The empty lots of the area filled in with aggressive homebuilding in the 1930s and 40s. Soon Carville was mostly forgotten, its ghost revived only on the odd occasion when some remodeling project uncovered wheels under a living room floor! 19

In 1994, researcher James L. Heisterkamp went on a search for any remaining Carville homes. He stumbled on the existence of "Carzonia", the Richmond district's mini-Carville made of cable cars on the strip between California and Cornwall streets near Fourth Avenue. He found that 1415 47th Avenue was once a Carville home owned by one of the Falcon Club founders (Ida Fitzgerald, and her husband Robert), but was disappointed to hear a remodeling job had apparently wiped out all remains of its streetcars. Finally, after chatting up people he met on walks, James hit paydirt. 20

Next take a look at the marvelous piece of Carville that still stands in the old Oceanside.