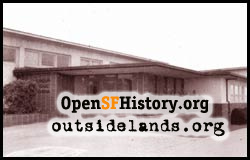 Juan Crespi Home School was built at 2105 - 24th Avenue, on the southwest corner of Quintara Street. -

Were you an elementary student at Juan Crespi Home School or a student at Lincoln High with classes at Crespi? If so, I'd love to hear from you. It is very difficult to get any historical information on this school.

Juan Crespi Home School was built at 2105 - 24th Avenue, on the southwest corner of Quintara Street. Plans for the school were controversial. According to the San Francisco Call-Bulletin in May 1948, four homes were condemned so that a new elementary school (originally called "the Sunset Reservoir home school unit") could be built. This was a compromise; the school district originally wanted to condemn twenty-six homes on 24th Avenue.

The school opened on September 5, 1951, as one of several "home schools" in the Sunset. (Noriega Home School was one of this group.) The construction of home schools---most offering classes in kindergarten through grade four---was probably a response to the birth explosion we now call the Baby Boom years. Many Sunset children in the 1950s could just walk a few blocks to school. I, for example, lived on 22nd Avenue, between Quintara and Rivera. The 2-1/2 block walk to Crespi was easy for me, and I did it alone starting in kindergarten. 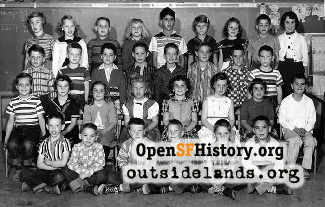 The early years at Crespi were uneven. Frances Blum Field, who graduated from Lincoln High in 1963, remembers that in 1951, Crespi did not have a kindergarten, so she had to travel from her home, on 20th Avenue between Pacheco and Quintara, down to Jefferson Elementary School at 19th and Irving. She started first grade at Crespi, which she attended through third grade, then returned to Jefferson for the remaining elementary grades.

"I have two great memories of Crespi," says Frances. "It had pressed cork flooring with radiant heating on the floor." She also recalls the janitor. "His name was Scotty Drummond and he always wore a dark-colored uniform. The kids adored him. He had whitish hair, dancing eyes, and a Scottish brogue."

I began kindergarten at Crespi later, in fall 1957. A friendly policeman walked us across 24th Avenue from the east to the west side. Each grade level had one classroom, except first grade, which had two. Some former students might remember Miss (Mrs.?) Fitzgerald or Miss Gough for first grade, Mrs. Behrens for second grade, Mrs. Kelleher for third grade, and Miss Joan Brehm for fourth grade. 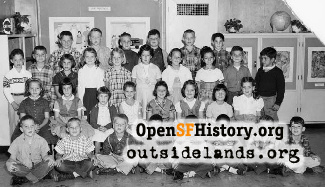 In the small playground, which seemed large to us, we played kickball, dodgeball, jacks (on the concrete riser surrounding the flagpole), and hopscotch. We also played on the swings, turning bar, and metal jungle gym. The playground equipment is long gone. The yard is now cluttered with temporary buildings.

Crespi was connected to Parkside School on 25th Avenue between Ulloa and Vicente. We had the same principals---Miss Wisecarver, Miss Grosso, Mr. Rodman---and most of us went on to Parkside for fifth and sixth grades. Other students, depending on where they lived, went to Jefferson for the final grades of elementary school.

In June 1962 or 1963, Crespi closed, due to low enrollment. Actually, the school didn't close completely; it was taken over by Lincoln High School, which needed classroom space. David Whitehead (a 1964 Lincoln High grad) remembers heading across the street from Lincoln for a class at Crespi when he learned that President Kennedy had been shot. 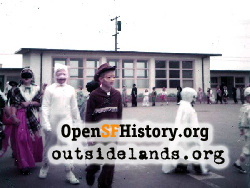 Halloween in the yard of Juan Crespi School, 1950s -

I started at Lincoln in fall 1967 and was amazed when my tenth grade geometry class was in my third grade classroom! We all laughed at how low the chalkboards were. We almost kneeled on the floor to get water from a drinking fountain. Lincoln girls couldn't fix their hair in front of the bathroom mirrors, which stood about waist high. And the toilets! They were so tiny and so close to the floor that they looked like toys.

It is difficult to gather any history about the school. The San Francisco Public Library has no record of Crespi, although the photo archives do have one picture of it. The school district turned over its files to the San Francisco History Center at the main library, but the files do not mention Crespi. An employee of the San Francisco Bureau of Architecture believes that an outside architect designed the building in the late 1940s. (I'd love to know who!) The Bureau's only record of the school is exterior painting and door replacement completed in 1962, but the actual records for this job were turned over to the school district years ago. After this article was published in the Lincoln Log (the high school's alumni newsletter), I heard from someone who attended Lincoln as late as 1980 and had classes in Crespi, so the building was part of the high school longer than it had been an elementary school! 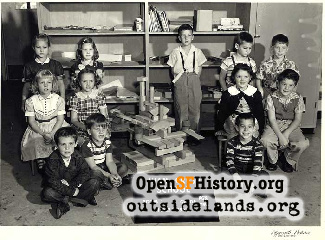 The Juan Crespi Home School building still stands and is used for state and district programs. The address has been changed to accommodate two entrances on Quintara: One can enter the San Francisco School Health Programs Department at 1515 Quintara or enter the California Children's Services Medical Therapy Unit and the San Francisco Unified School District Therapy Unit at 1595 Quintara.

For a short time, this building served as an intimate gathering place during an era when the Sunset was full of young children. And for just as long (maybe longer), it was an extension to Lincoln High School. While Juan Crespi Home School is lost to San Francisco city records, it remains in the memories of those who went there.

Please let me know if you have historical information or stories to tell about Crespi. You can reach me at lorri@outsidelands.org.


Contribute your own stories about your neighborhood!