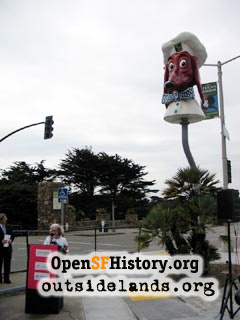 This sign stood outside the last operating Doggie Diner restaurant (later, 'Carousel') on the N.E. corner of 46th Ave. and Sloat Blvd.

A massive grassroots preservation effort, chronicled nationally in the "Zippy the Pinhead" comic strip, led to its acquisition by the City of San Francisco (Dec. 2000).

Toppled by wind April 1, 2001, it was restored by the Department of Public Works, returned to its post by Independence Day, and relocated to this median in January, 2005.

The last Doggie Diner head (on a pole) makes its home in the outer Sunset District, and since being designated as a landmark it has transcended its origin as a whimsical advertising icon.

Started by Al Ross in 1949, the chain of Doggie Diner restaurants were everywhere by the 1960s. The Richmond District alone had three of them, and a three-dimensional (and once rotating) dog head with chef hat glared down gleefully at each of them. Ross sold the chain in 1979, and the last diner to go by the name Doggie Diner closed in 1986. (The name was revived for certain concession stands in the San Francisco Giants new ballpark in 2000.) 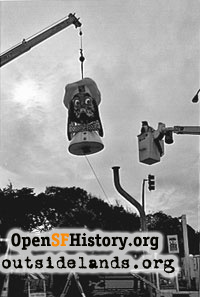 Designed in the 1960s by illustrator Harold Bachman (who, surprised at all the hubbub, said in early 2005 he just thought the darned thing would help sell hamburgers), this San Francisco institution has found a new location a block from its old home. The Doggie Diner head now welcomes visitors to Ocean Beach from 45th Avenue and Sloat Boulevard, giving his sardonic grin to all who come west. (Probably a nice change of view, after looking south at the San Francisco Zoo for over 40 years.)

On February 14, 2005, under threatening skies, a small, happy crowd welcomed the Doggie to its new home. Ed Lee, the head of San Francisco's Department of Public Works, presided and welcomed third-graders from Ulloa Elementary School, some real canines (and their guardians), a couple of jugglers, elected officials, and a passel of media.

Doggie saviors Diana Scott and Joel Schechter of the Ocean Beach Historical Society attended and Diana gave a few words of thanks along with the exclamation of the day: "Long Live the Doggie!"

No sign of Zippy the Pinhead, but likely the Doggie will re-enter Zippy's world soon enough… 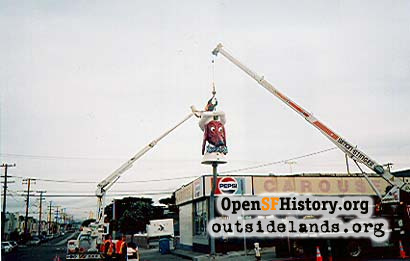 The 2001 Doggie Dedication—a recap and photos from Arnold Woods.

See Zippy the Pinhead and the Doggie!