Country Living in the Sunset 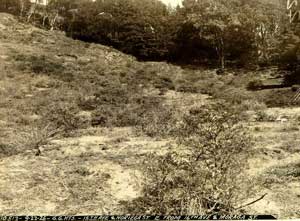 This is an excerpt from Stan Adair's excellent unpublished book "Spell Hippopotamus". Stan grew up in the Sunset District in the early 1920s, and here he describes the wildlife and vegetation in an area just off today's mini-freeway that is 19th Avenue.

Living in the home on 18th Avenue was like living in the country. When we first moved into the house there was a huge blackberry vine in the backyard. This supplied us with all the berries we wanted; for cobblers, to be served with cream, or to be mashed into vanilla ice cream. After a couple of years we ripped out the vine and built a chicken yard and some hutches to house rabbits. Ed and Milt had the responsibility of raising the livestock. We always had a good supply of fresh eggs and chickens, as well as an assortment of vegetables from Mother's garden. In later years we raised guinea pigs, which we sold to the University of California Medical School in San Francisco where they were used for laboratory tests.

There were less than a dozen homes in our immediate area when we first moved to 18th Avenue. Acres and acres of brushy hill stretched up behind us, and literally miles and miles of sand dunes undulated all the way to the beach and the ocean. There were no paved streets, no sidewalks, and no street lights at this location. The hills were plentiful with cottontail rabbits, and it was not unusual for us to go hunting rabbits for dinner. We could get all we wanted within 500 feet of the front door. Not allowed to have firearms, we hunted the rabbits with sling shots. It took a pretty good shot to hit a running rabbit with a small stone projected from this antiquated weapon, but we were able to do it. It was almost country living. To say we went to bed with the howling of the coyotes ringing in our ears, or that we had to circle the wagons and fight off Indians would be carrying it just a bit too far. However, it was rustic, it was country-like, and it was a perfect setting for a family with four active, adventuresome boys.

The thought of wilderness flowers, weed patches, and wild berries brings back fond memories. In their time of blossom we could look out on acres of golden poppies with their faces open, looking toward the sun at noon, but all curled up, snug in their bonnets, at the end of the day. Lavender lupines brightened the landscape. Sunny yellow dandelions grew everywhere.

The dandelions had two separate, practical, functions at two separate stages in their development: first when they were in full bloom, and later, when the yellow blossoms had turned to seedpods. The only sure way of telling whether a kid liked butter or not was to pluck a mature flower, and hold it under the patient's chin. The sun reflected the golden glow of the blossom, as it shimmered slightly above his Adam's apple. Modern science has not improved on this method of testing for fondness of that thick, yellowish product that comes as a result of churning the creamy part of milk. In my years of testing I never found a friend who didn't like butter - as long as the sun was shining.

The second test was used to answer some of the more pressing problems of the day: Is it going to rain? Will my team win the game? Can I expect new skates for Christmas? Does that cute girl in the third grade really like me? This test was made by using the full-fledged, white-topped, "senior citizen" version of the dandelion gone to seed. The answer to these weighty questions was in the affirmative IF, after blowing on it, every single pod was separated from its home base. This scientific experiment took plenty of air power, so we gasped deeply, at least three times, in order to fill our lungs to capacity. There would be a mild explosion as the breath shot from our lips. Seed pods burst into the air then floated gracefully down to the ground. Usually we were able to get a "Yes" answer to our question, but occasionally one or two pods stuck heroically as though they had been glued to the brown foundation.

Who can ever forget the taste of wild strawberries? In tramping the hills, or the sand dunes, we often discovered a berry patch. Even as small children we learned the white blossom produced a tiny green nubbin, which changed into a diminutive white lump, which in turn developed into a ripe, round, red, fully-packed piece of fruit that made us close our eyes in ecstasy. The location of those berry patches were kept a deep dark secret, even from our closest friends. We didn't share wild strawberries with anyone!

As mentioned, the entire Sunset District was built on sand, and as any gardener knows, you can't grow shrubs, flowers, or vegetables in sand. It takes good earth, rich loam, or topsoil in order to produce crops. Mother, having come from the farm, wanted her garden, so we had to haul tons of black loam in from the South San Francisco area. Dad reasoned that with those four strong sons sitting around the house with nothing to do, and eating all the groceries, there was no reason to pay someone else to haul the stuff. One of my older brothers would drive the family car out to Skyline Boulevard where all the commercial truck gardens were, and we'd look for some rich looking field, or pile of good soil. The rear windows of the car were cranked down, the back seat removed, and the family car suddenly had been converted into a truck.

We'd shovel topsoil through the open back windows of the car. When we had a load that came just shy of breaking the springs, we'd drive home and park the car up on 17th Avenue behind the house. There was no way we could get the car near the area where we needed the soil, so all of it had to be carried by hand. We had obtained several large, sturdy, wooden crates to which we had nailed two parallel handles. After filling these containers with the soil from the car, it took two boys to carry the heavy load down to the house and dump the contents into the garden. Mother was all smiles as load after load of high grade loam was being dumped into what would become her vegetable patch and flower beds. What a back breaking job it was to haul all that dirt. We Irish kids had a very good idea of what the Chinese suffered in the early days when the railroads were being built across the West. The only difference was that the Chinese got paid; whereas, all we had was the satisfaction of knowing that Dad couldn't fire us because as slaves we could only be sold or traded.