News of a burgeoning construction activity in the sand dunes

Blocks at Park Lined with Homes

Builders Are Selling Houses as Rapidly as They Can Complete Their Work.

Development of New District Regarded by Agents as a Remarkable Growth.

In no section of San Francisco has there been a more remarkable development than in the Sunset district, contiguous to Golden Gate Park. This is particularly true of the first tier of blocks between Lincoln way and Irving street. Lincoln way, formerly H street, runs along the southerly boundary of the Park, and it is indeed the Park that has contributed most to this new growth. 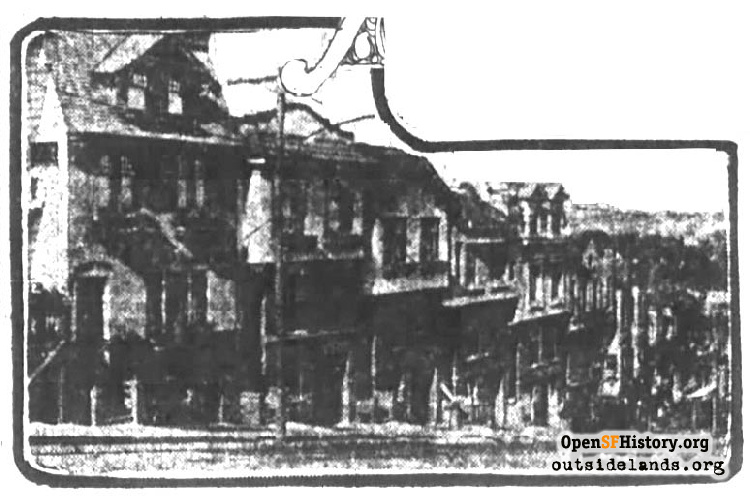 A number of enterprising builders settled in this part of the city about a year ago, and real estate agents dealing in subdivision blocks began about the same time to operate there.

The effect of this happy combination may be appreciated today by the visitor to the scene of their operations, for instead of sand dunes there are rows of very attractive homes ranging in price from $5000 to $10,000, and many of them are occupied by delighted owners.

Improvement of the streets westward from Twelfth avenue, block after block yielding to the steady march of progress, has literally paved the way for the builders. Still the interesting fact remains that there is perhaps more home building in progress within a comparatively contracted area in those Golden Gate Park blocks just now than in any other part of the city. 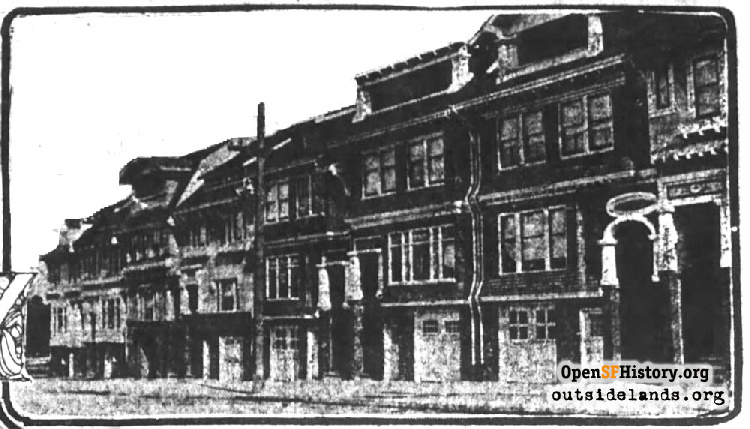 The development of large spaces by real estate firms that recognize the importance of putting suburban resident land in proper shape for immediate home building has here made itself felt. It is the modern method of dealing with residential property presented in striking contrast to the old-fashioned peddling of lots from maps of ungraded blocks.

The United Railroads Company is relaying its tracks in Lincoln way with its standard heavy grooved rail, making a roadbed which will assure rapid transit for cars to the beach. This is done in anticipation of heavy traffic over the line. The city is about to pave half the street facing the Park out to the ocean beach.

People who have bought new residences between Lincoln way and Irving street express themselves as delighted with their homes and the location. They have the city's pleasure ground at home, and the invigorating climate is a source of constant surprise and pleasure, bringing improved health to children and adults alike. And they have become "boosters" for Sunset and the Park. A local spirit has already been created and it is contagious among visitors, who, in turn, are buying homes there.

As for the new residences, some of them are of the story and a half type, but nearly all are two story and basement, with garages in the basements, and really artistic interior and exterior treatment. They vary so much in design that at best only the individuality of the designer is discerned in different rows. Some are in the Italian renaissance so well suited to the town house of the more formal taste, but most of them are designed after the craftsman ideals, which are now so popular. There is a wide and pleasing variety to meet all tastes, and the prices are reasonable, as any one who builds his own house will understand.

The property of the Sterling Realty Company on Thirty-seventh avenue, between Lincoln way and Irving street, is rapidly being transformed into a beautiful boulevard, with artistic homes on either side of a palm planted street. The improvements on this street are of the highest class that money can provide—bituminized streets, granite curbs, cement sidewalks, gas, water and sewer installed and telephone poles in rear of lots, with no unsightly poles on the avenue. In many other Sunset blocks electric light poles are being placed in the rear of lots, which adds materially to the appearance of the district.

L. U. Grant is completing eighteen artistic homes on Thirty-seventh avenue between Lincoln way and Irving street, five of which have been sold before the homes have been completed. They are modern houses with six rooms and garage and with classic fronts. The houses contain marble entrances, hardwood floors, novel elm grain paneled dining-rooms, butler's pantry between kitchen and dining-room, outdoor sleeping verandas and the latest linocord wall coverings. The combination basement garages are eight feet in height. The houses are set back twelve feet from the property line, allowing for ample lawn space with a geranium planted base. Palms are planted all along Thirty-seventh avenue, giving it a beautiful boulevard effect.

The Sunset Home Realty Company is building a row of very attractive two-story residences on Fifteenth avenue between Lincoln way and I street. Each house has a different style of architecture and an individuality. The interior finishings are of the highest class.

Houses on west side of 42nd Avenue near Lincoln Way, designed and built by Alonzo Harrington., Jan 18, 1913 - San Francisco Chronicle

A. Harrington, who has been building homes for more than twenty years in the Sunset district, now has a number of new houses under construction on Forty-second avenue, between Lincoln way and I street. The pains taken by Harrington to put grass plats, palms and flowers in front of each house give an attractive appearance to the whole street.

Golden Gate Park is at the door of the houses that will be built at the Stadium lots of Lyon & Hoag and can never be taken away.

Contribute your own stories about western neighborhoods houses.