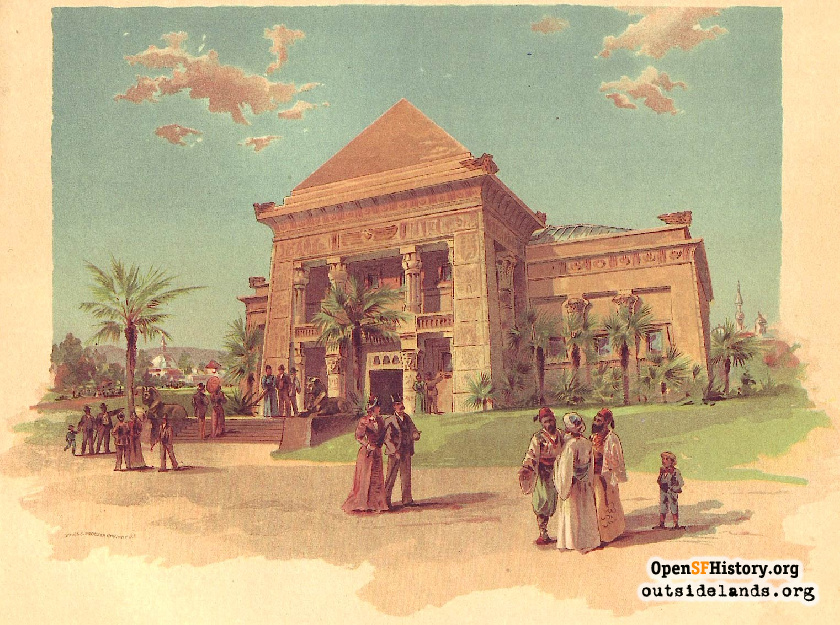 Of the five main large buildings of the California Midwinter International Exposition only one, the Fine Arts Building—or Palace of Fine and Decorative Arts—outlasted the fair as a memorial to the exposition and a gift to Golden Gate Park.1

Made of brick, iron, and glass, designed to be fire- and water-proof, the Fine Arts Building contained “Department D” exposition exhibits: fine arts of painting, sculpture, architecture, and decoration. C. C. McDougall, a San Francisco architect, won a juried design competition with what the official history of the exposition called “an adaptation of Egyptian architecture to modern uses […] simple in form and unpretentious in outline.”2 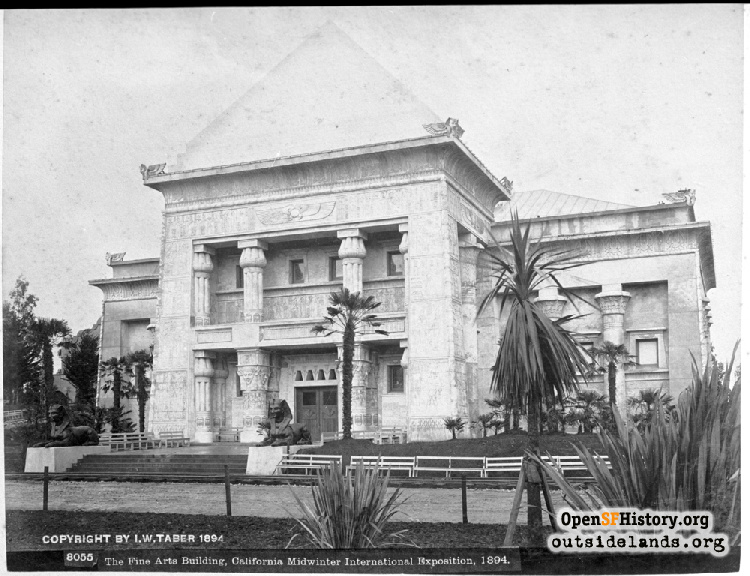 To twenty-first century sensibilities, a pyramidal structure resembling a tomb may seem a curious design choice for a museum. But the fair was all an attempt to show that California measured up in sophistication (and commercial opportunities) to any European power. So, in heavy-handed fashion, the main fair buildings mimicked classical styles from western civilization.

Reliefs of lotus and palm leaves and gods’ heads covered the columns of the Fine Arts Building façade and a frieze of ancient Egyptian imagery and hieroglyphics surmounted the entryway. Inside, walls not frescoed were covered in red drapery. The building was set back and a little above the music concourse roadway with palm trees in front. Sphinxes flanked the formal staircase up to the entrance. (Although not the original sphinxes, the two situated just to the east of the twenty-first century de Young Museum sit in about the same location as their predecessors.) 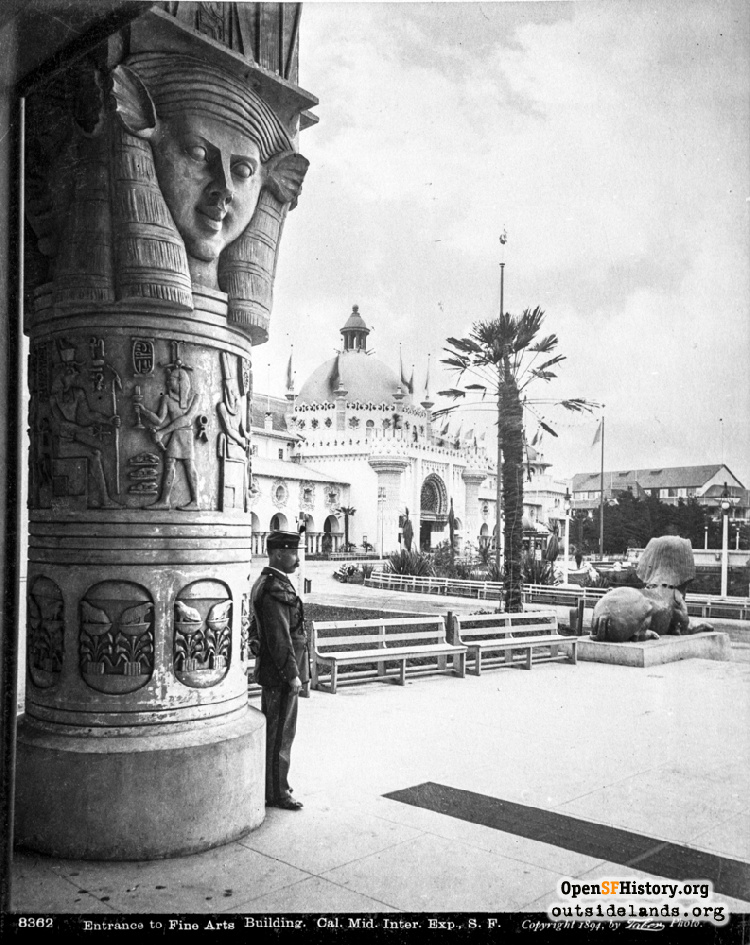 Originally planned to be 120 feet by 60 feet, it had to have a 40-foot annex put in during construction to hold all the material, which provided an opportunity to bring in more light as well, satisfying a complaint of the exposition artists. The entire structure was constructed in three and half months by the firm of Worrall & Miller for $57,727.45 ($1.6 million in 2019 dollars.)3 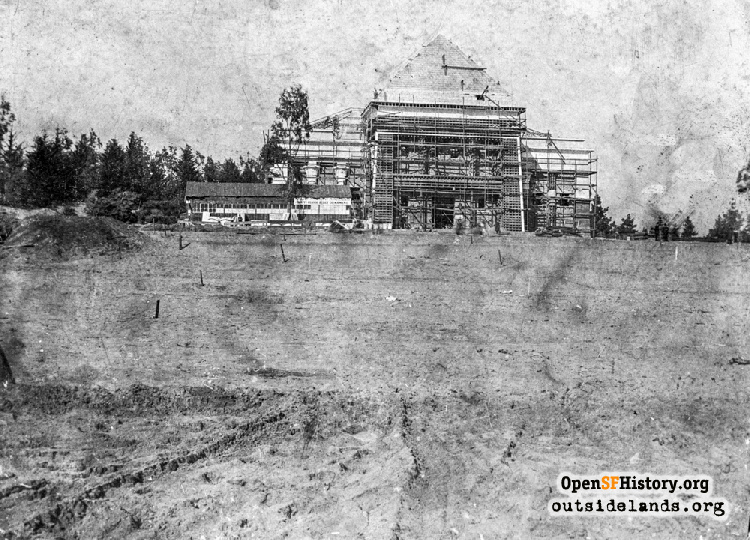 Fine Arts Building for 1894 Midwinter Fair under construction, on the future Music Concourse. Later called Memorial Museum. Became part of the de Young Museum before being demolished in 1929., 1893 -

John A. Stanton, a California artist who had studied in Paris, acted as chief of the exposition’s Department of Fine Arts, or the “esthetic department.” While the idea for the California fair was to take the best exhibits from the 1893 Columbian Exposition, by the time Stanton received his commission most of the art from the Chicago fair had been returned to the owners. Stanton hurried east to secure agreements to exhibit what was left. The Midwinter Fair ended up with 100 paintings from Poland and 78 from France. For England (21), Italy (15), Russian (14), Germany (5) and Spain (3), as the official history notes, “representation was one of excellence rather than of extent.” From Chicago, Stanton traveled on to New York to secure the works of 65 American artists and 14 Canadians.4

Naturally, the Department of Fine Arts also had to have a good showing of California art. Invitations to submit works were sent to artists of reputation in the state and a selection jury was formed. Ultimately 60 California artists had 135 works on display. Much of the art, in keeping with the exposition’s goal of promoting the region, displayed “the material delights of California,”—flowers, fruits, and lush landscapes. The “International” theme of the fair brought in many views of Spanish Missions and scenes of Chinatown cluttered together on red fabric walls.

Recycling art from the Chicago exposition brought the Columbian theme west as well. A mammoth statue of Christopher Columbus stood in what it today the park’s music concourse. The Fine Arts Building had a Columbus bust and paintings by Ivan Aivazovsky, “marine painter to the Czar,” of the Santa Maria at sea and the 1492 arrival in the Americas. Harriet Hosmer’s white plaster statue of Queen Isabella of Spain about to hand over her jewels to Columbus had a place of prominence at one end of the statuary hall. An inscription read “I am willing to assume the undertaking for the honor of my own crown of Castille, and am ready to pledge my jewels to meet the expenses of the expedition.” Hosmer was one of many women artists represented at the Midwinter Fair. (Read Mae Silver’s appreciation of these artists, written on the 100th anniversary of the exposition.) The San Francisco Call noted that the pure white form of Isabella was quickly begrimed by the dust kicked up in the gallery by visitors.5 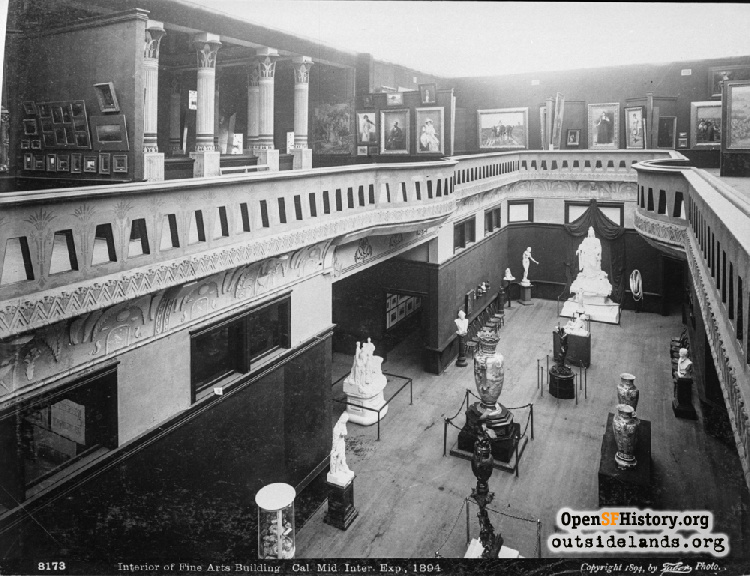 Many of the artists, while hailed and heralded at the time, would be unknown to the general public today, but there were a couple of Monets, a Renoir, a Pizarro. One of the big hits at the fair, “Toilet of the Bride” by Konstantin Makovsky, now occupies most of a wall in the Palace of the Legion of Honor at Lincoln Park and is better known as “The Russian Bride’s Attire.” The nine-foot-wide masterwork was purchased by Michael de Young at the fair’s conclusion for between $6,000 and $7,000 (roughly $175,000 to $204,000 in 2019 dollars) and was later donated by de Young to what is now the Fine Arts Museums of San Francisco.6 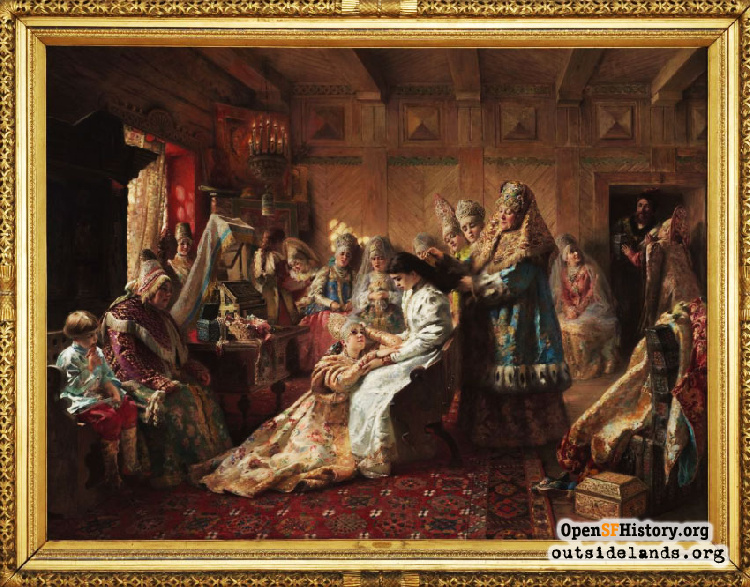 Makovsky’s work wasn’t the only art that stayed in California when the exposition ended. Oil paintings in the German section were offered at half price and auctioned off and the official history notes “A large number of foreign paintings found new owners in San Francisco.” De Young purchased what he could for his own walls and the Memorial Museum that would occupy the Fine Arts Building after the exposition’s conclusion.7

A six-foot high Cloisonne vase put on display in the Fine Arts Building as part of a Japanese collection in February 1894, was recently “discovered” in the Berkeley seafood restaurant Spenger’s, although many local historians knew that it had come from the fair. It stands in the center of this photograph of Fine Arts Building interior. 8

1. The Executive Committee tried to convince the Park Commission to take the Administrative and Manufacturers buildings as well, despite its promise to destroy and remove all buildings at the end of the fair. The Executive Committee wrote such action “would seem like sacrilege and wantoness.” (The Official History of the California Midwinter International Exposition, (San Francisco: H. S. Crocker Company, 1894), pg. 192.) The Park Commission took the Fine Arts Building and the improvements that created the Music Concourse, but declined the rest.

3. Construction was started on September 28, 1893, and a majority of the artwork was installed in mid January 1894.