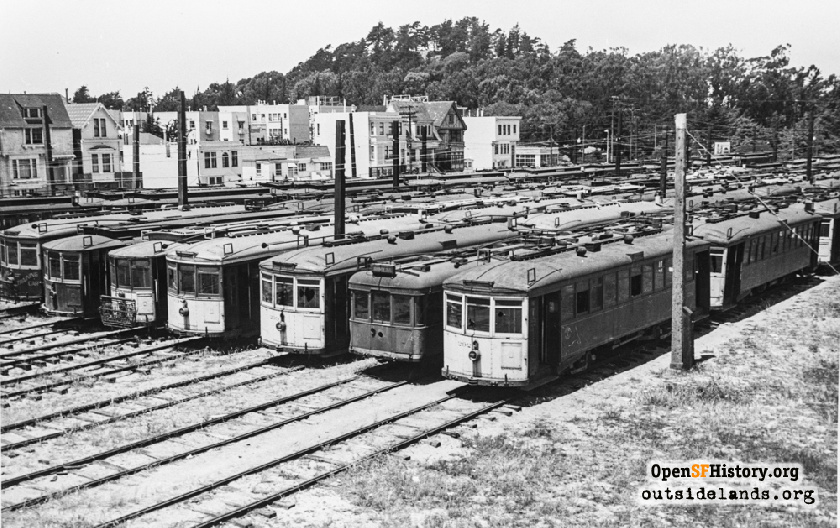 The streetcar graveyard at 14th and Lincoln 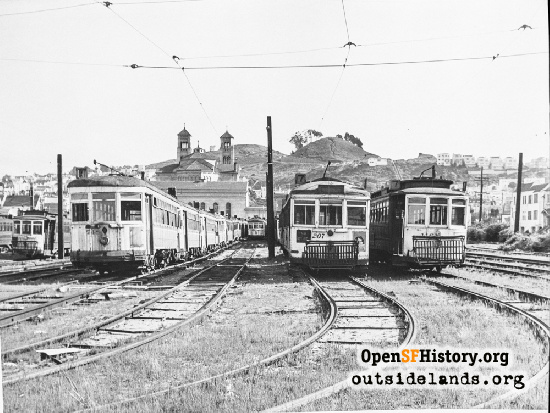 Val Golding, who passed away in 2008, kindly allowed us to reprint excerpts from his work "SAN FRANCISCO: that was THE CITY that was." Here he remembers the "boneyard" in the Sunset district where San Francisco streetcars went to die. Two large apartment buildings and a grocery store replaced the old streetcar yard.

The Boneyard was just a big empty lot, a streetcar graveyard comprising the entire block between Lincoln Way and Irving Street and Funston and 14th Avenues. Here, cars in dead storage were exposed to the elements and deteriorated in short order. A small structure served as a gilley room for the few 6, 7 and 17 runs which were dispatched from the Boneyard. These runs were left over from the tiny Haight Street carhouse, overcrowded ever since the Oak and Broderick carhouse closed in 1938, and the 6-line was moved to Haight. The yard also served as a marshaling area for football trippers serving nearby Kezar Stadium.

Stored in the Boneyard at the end of the brief one-man era were the Visitacion twins 735 and 736, the other eight Brill Semi-convertibles, 725-734, all from the Williamsport Railway; the East St. Louis Railway cars 740-754 and 407-410 as well as the five magnificent St. Louis "Sedan" cars, 402-406, which in service plied the unimportant 35-Howard line. These all steel Sedan cars were the most modern cars owned by the MSR (Market Street Railway). While not particularly speedy, they certainly were among the finest cars operated by that company.

The 400s and 700s and a few other oddball cars remained at the Boneyard only until 1941, when they were sent to Elkton Yard for scrapping. Ironically, as MSR started converting to bus, space on the Boneyard tracks occupied by these remnants of one-man operation was soon filled by some of the very cars they originally replaced. The Boneyard's final use was to store all of the former MSR cars made surplus by the Muni conversions to bus and trolleycoach.

I spent many an hour wandering through the Boneyard, marveling at the wondrous collection of has-been streetcars and playing motorman at the controls, most of which could be operated with a wrench. The imported cars were my favorites and were all gone by 1941. Remember, a few Haight and Stanyan runs operated from Funston, so as the yard approached full storage capacity, a few laid-up cars were sent to Sutro Division which then moved its 4-line cars to McAllister barn in a game of musical streetcars. This was around 1940 when the MSR had been forced to take all the one-man cars out of service. To my pre-teen eyes all of this shuttling about was thrilling to watch. 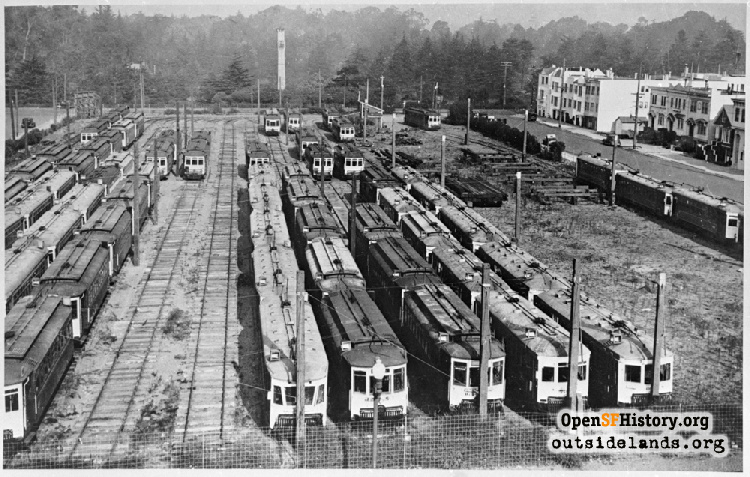