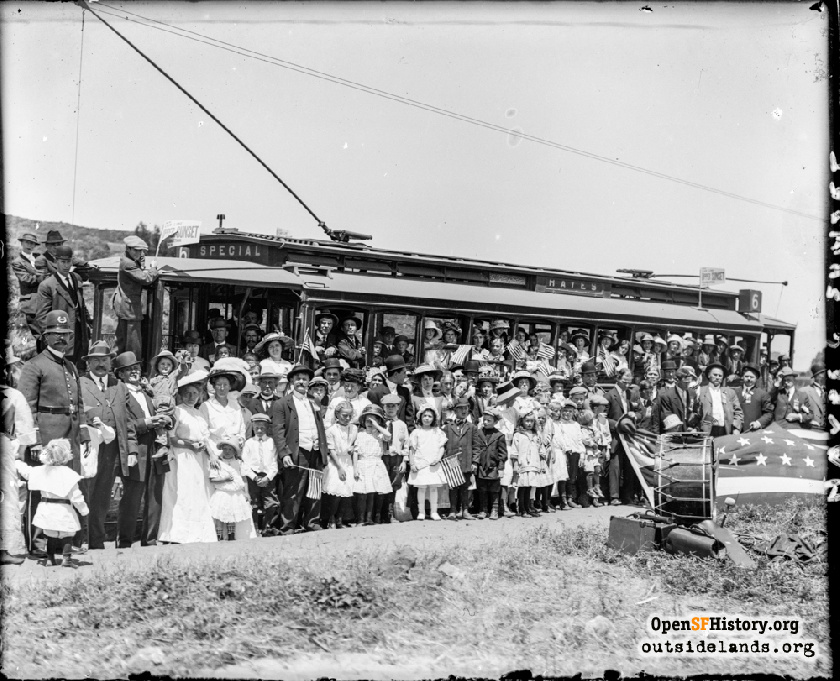 From 1906 to 1948, streetcars ran from the Ferry Building to Sunset Heights. 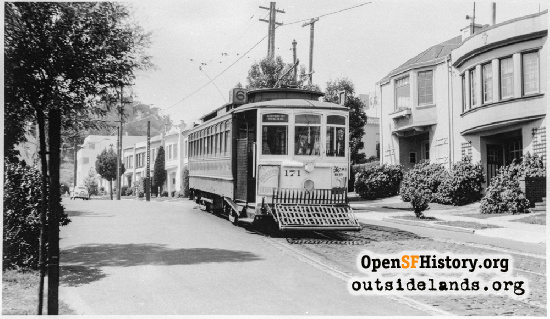 The United Railroads extended their Hayes and Masonic streetcar up 9th Avenue to end at Pacheco Street starting June 15, 1912. Bob Fisher, a longtime Sunset Heights resident, told us the extension was paid for by the neighbors and the line was nicknamed "streetcar to the stars". It wasn't uncommon for real estate promoters to pay for such extensions, and Forest Hill opened for sale at the same time, so likely the story is true. (A rail historian, Walter Rice, also heard developers in the area paid for it.)

On Sunday, June 16, 1912, the 9th Avenue extension up the hill was commemorated with two ceremonial streetcars covered with bunting, filled with local dignitaries, and heralded by a band that rode along and played the whole way from the Ferry Building to Sunset Heights. There, in a mostly-undeveloped area, the Upper Sunset Improvement Club hosted a celebration with speeches, a grandstand, a giant American flag, tents, free food, and dancing until sunset. A reported 4,000 people attended.

The "6 Haight and Masonic" name officially was adopted on February 7, 1916, reflecting the 6-line being rerouted from Hayes to Haight street. From 1921 to 1944 it was operated by the Market Street Railway. The Municipal Railway took over operation of the 6-line in September 1944.

The Hayes and Masonic service was replaced by the 32 Hayes and Oak Street streetcar. During peak periods, the 32 ran over the 6-line from Haight and Masonic to 9th Avenue. This line was an early victim of the Great Depression.

Following the completion of the Municipal Railway's Sunset tunnel in 1928, 6-line streetcars shared the tracks along Carl Street with the N-Judah.

Read about the Harold Lloyd movie shown on a 6-line streetcar in 1929.