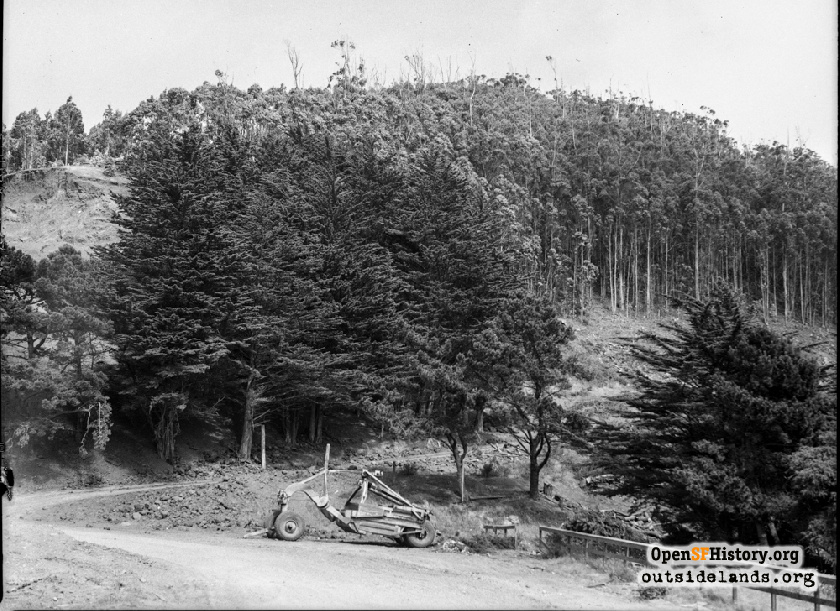 In 1880, Adolph Sutro bought hundreds of acres west of Twin Peaks and planted thousands of trees during the next 20 years He created a huge forest in the middle of San Francisco. The forest might have been turned into rows of tightly packed houses on rectangular street grids, with little regard for the contours of the land--had it not been for Sutro's long stewardship and the 20-year probate after his death. A stewardship marked by farms and fires.

Today some of San Francisco's most desirable neighborhoods cover Sutro's farms and forest: Forest Hill, St. Francis Wood, Ingleside Terrace, Westwood Park and adjacent areas. Desirable for their generous lot sizes, detached homes, gently curving streets, and landscaping, these neighborhoods owe their unique design to the City Beautiful movement of the early 20th century and the mania to rebuild after the 1906 earthquake and fire.

The Breasts of the Indian Maiden ---Twin Peaks Block Development

Although San Francisco grew rapidly after 1849, development west of Twin Peaks lagged for decades. The land west of the hills was one vast sand dune, swept by wind and fog most of the year. A ridge of tall hills, three times taller than Telegraph Hill, cut off the western part of San Francisco from the bay side.

Starting with Mount Sutro (elevation 918 feet) near Cole Valley, running south to Twin Peaks (called Los Pechos de la Choca or "the Breasts of the Indian Maiden" by the Spanish, 919 feet), and ending at Mt. Davidson (936 feet), these hills sheltered the City by the Bay from the fog and offshore wind. But they also blocked development. 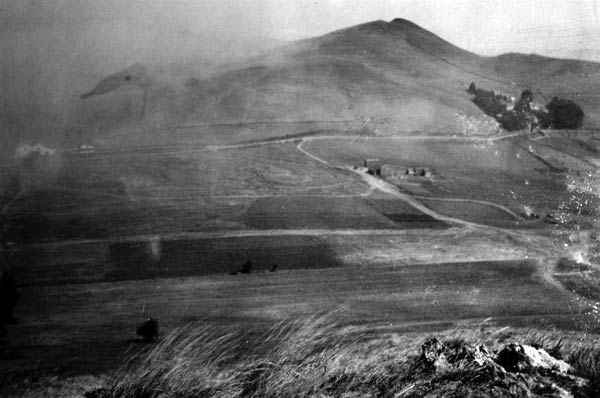 This vast area was home to few attractions: the beach, a racecourse and scattered farming. The Beach and Ocean Race Course, built in 1865 just south of what is now Sigmund Stern Grove, featured horse racing. Large crowds made the journey through the hills on weekends. "Road houses" such as the Ocean House near the beach or Lake House near Lake Merced 1 offered food and drink.

The only road over Twin Peaks began at present-day 17th Street and Collingwood, ran east along the present-day Market Street, up Corbett, down Portola Drive, and south along Junipero Serra Boulevard to Ocean Avenue. (Today's Upper Market and Portola streets closely follow the old road, although they are twice as wide.) 2

In 1872, the road was paved, christened the Mission and Ocean Beach Macadamized Road, and a tollhouse was erected at the top of 24th Street. 3 The rock for paving the road probably came from a quarry just off the road in Edgehill, where the First Church of the Nazarene now stands at Waithman and Portola. It was in operation until 1916. Landslides still occur as result of the quarrying. 4

At the western base of the hills, at the present intersection of Ocean Avenue and Junipero Serra Boulevard, travelers could rest their horses and fortify themselves at Farley's saloon. Bernard Farley established the saloon in 1863, and he and his sons worked and lived there for the next 50 years. Sons John, James (a blacksmith in 1877, then a bartender in 1888), and Bernard Jr. (a bartender in 1893) sold their own brand of elixir, "B. Farley's Wonderful Discovery," in 1899. 6

Adolph Sutro is remembered for building the Cliff House and Sutro Baths, battling the Southern Pacific railroad, and serving as a populist mayor (in 1895-96). But when he arrived in San Francisco in 1879, he was just another silver millionaire (his $900,000 from the Nevada Comstock silver mine was worth about $22 million in today's dollars). Sutro went on a spending spree, buying property in downtown San Francisco and the undeveloped land west of Twin Peaks, later to become the Richmond and Sunset districts. He eventually owned about 1/12 of the city. 7 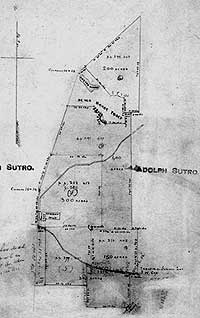 Sutro is quoted as saying, "I took my money and invested in real estate... when everyone was scared and thought the city was going to the dogs. [There was an economic depression at the time.] I bought every acre I could lay my hands on until I had 2,200 acres in this city." 8

His largest single piece of real estate was the 1,200-acre Rancho San Miguel, the remnant of a large Mexican land grant originally awarded to Jose Noe in 1845. Noe and his successors did some grazing but little else with the land. 9

Sutro's parcel ran from the present-day University of California-San Francisco (UCSF), south along Stanyan Street, up over Twin Peaks in an imaginary line due south (aligning roughly with present-day Genesee Avenue), continuing south in the Ocean View district, then east to Junipero Serra Boulevard and to Laguna Honda reservoir (click on the map at right for a closer view in a new window). 10 It contained Mount Sutro (which Sutro named Mount Parnassus), Twin Peaks, and Mt. Davidson (called Blue Mountain). Before Sutro, these hills were called the San Miguel Hills.

2. This is probably the road built by one of the early owners of the Rancho, Pioche, who built it in 1860 or shortly thereafter. This is a natural route winding its way between the hills and ravines. It had many names over the years: San Miguel Road, Mission Pass Road (Hittell 1888), Mission and Ocean Beach Macadamized Road (1872), Corbett-Portola, and Market-Portola. Market Street was finally extended southwest from 17th and Castro in the early 1920s in conjunction with building the east portal of the Twin Peaks tunnel on a curving line following the course of the earlier road. In the late 1950s Portola Drive, from Woodside to St. Francis circle, was widened and dozens of homes were moved to vacant lots. Some ended up in Daly City.

3. Hubbard says the Corbett road was built in 1860 by the Pioche estate and completed by Fitch who made it a toll road in 1872. (Hubbard, Anita Day, Cities within the City, Typescript of San Francisco Bulletin columns at the San Francisco History Archives, Main Library. August to November 1924, pp 63.) Hubbard interviewed old time residents for a series of articles. Hansen says the toll road was built circa 1866. (Gladys Hansen, San Francisco Almanac, 1995 pp. 380.)

5. A second trail is visible on the USGS map starting at about 19th Street and Church which snaked along the northern slopes of Liberty Hill and Dolores Heights and joined at the intersection of about 24th Street, Elizabeth Streets and Grandview and Corbett (below elevated bridge carrying present day Market Street. This was also the located of the toll house. Kortum pp. 22.

9. Before the land was granted to Noe, it was part of the Mission de Dolores land holdings. According to Brother Cleary of Mission Dolores, there are no records bearing on what was grown or how the rancho was used in Mission times. It seems reasonable to infer that cattle and other animals may have been grazing on the eastern slopes of Twin Peaks.

Jose Noe was granted the original and much larger Rancho San Miguel by the Mexican government in 1845. Noe's rancho was four times the size of Sutro's running east to San Jose Avenue and south to Daly City (see map 2). Noe ran 2,000 head of cattle (Kortum pp.2 ) on his rancho and most likely grazed them on the eastern slopes closer to town and near his house at 22nd Street and Alvarado (Hansen pp. 370) where he grew crops near a "sweet spring" nearby. The rancho exchanged many hands over the years. The eastern part was developed in the 1860s and 1870s and became Noe Valley, Eureka Valley, Fairmont Heights, Glen Park and Sunnyside. (see Mae Silver, Rancho San Miguel, Ord Street Press, 2001. Pp 59-76)