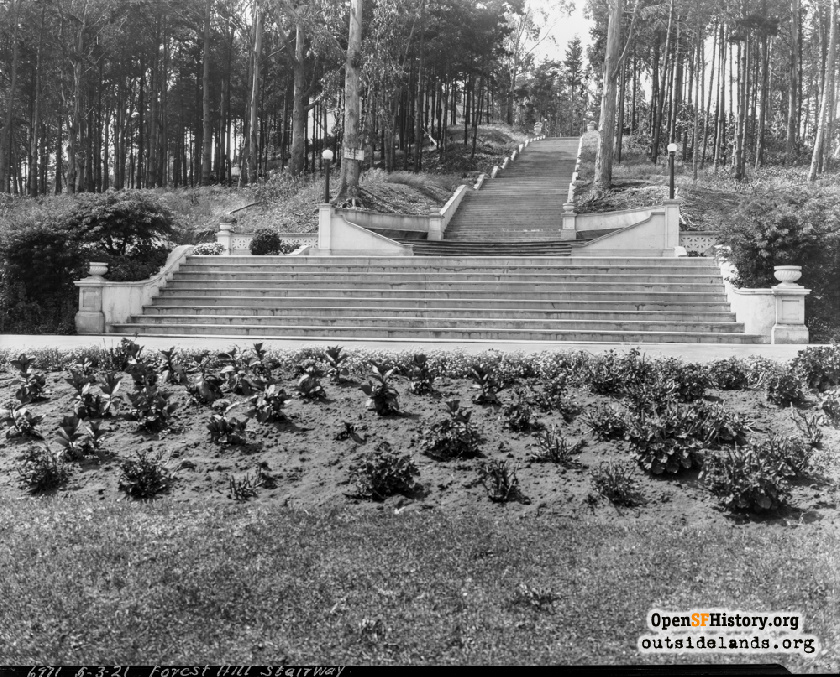 Developed by Newell-Murdoch, this residence park neighborhood's first house was completed in 1914.

A few seconds of damaged newsreel footage of Forest Hill from the 1920s, courtesy of Jack Tillmany. Digitization courtesy of the San Francisco Media Archive.

In 1910, twelve years after his death, Adolph Sutro's estate was finally coming out of probate. His heirs employed A.S. Baldwin, the well-known real estate agent from Baldwin & Howell, to do a formal assessment of Sutro's extensive properties.

In his photo-laden report Baldwin gave descriptions and suggested uses for the land, most of which was in the undeveloped western part of the city. Some of the property was cultivated and rented by farmers. Much of it was sand dunes and bunch grass. But the area Baldwin seemed most excited about consisted of Sutro's great forest that covered hillsides west and south of Twin Peaks:

"This is one of the most picturesque tracts of land in San Francisco. With the exception of a small strip of several acres lying between Serpentine Road and the extension of 5th Avenue, the entire tract is heavily wooded, and the pines, cypress, eucalyptus and other trees which were planted by the late Adolph Sutro between 25 and 30 years ago, now form a forest which in many places is almost impenetrable. [..] It will be possible to obtain beautiful vistas without denuding the hillsides of the splendid growth of trees which now exists, and which it has taken many years to produce." 1

Baldwin took matters into his own hands by forming a corporation to purchase the lands directly from the Sutro heirs, and sell subdivisions for the creation of residence parks like the successful Presidio Terrace in the Richmond district. 2 One of the first properties sold by the Residential Development Corporation was cut from the forest tract Baldwin liked so much.

The Newell-Murdoch firm bought the land and immediately set to work. The company knew what it wanted, having successfully created the Thousand Oaks development in Berkeley, California, which the San Francisco Call hailed as "one of the residential beauty spots of California." 3 Newell-Murdoch employed the same landscape architect from that project, Mark Daniels, who included a grand staircase at the formal entrance on Dewey Boulevard. This design centerpiece was framed by "ornamental balustrades, urns and artistic embellishments" furnished by the Sarsi studios. 4

Forest Hill followed the example of other residence parks, imposing strict requirements on everything from building design to the racial identity of its residents. (Read a typical flyer.) Despite Baldwin's optimistic assessment, Newell-Murdoch cut down most of Sutro's trees, leaving patches left here and there to create a sense of "the country in the city." 5

Newell-Murdoch deeded 21 building lots to the City of San Francisco free of cost in October 1912 to build the Laguna Honda subway station. 6 Like other developers and investors in the Sutro lands, the company was betting that the Twin Peaks Tunnel, and its promise of a quick commute downtown, would create a boom in sales. Newell-Murdoch aggressively promoted the property with photos, newsreels, flyers and promotional booklets. Every Saturday the real estate sections of the San Francisco Call, Chronicle and Examiner featured an advertisement, photo, or promotional article. Famed architect Bernard Maybeck designed two homes and the community clubhouse in Forest Hill in this time.

In 1918, the tunnel had opened but American entry into World War One had real estate sales stagnating. Homeowners in Forest Hill weren't very pleased with the streetwork and utilities in the development, which had been laid out quickly and didn't meet city standards. 7 The residents formed a corporation, the Forest Hill Association, and made a deal with Newell-Murdoch to take over the entire tract. 8 (In 1978, the City of San Francisco relieved the Forest Hill Association of responsibility for the streets and curbs.) Newell-Murdoch faded from the scene and the majority of today's homes in Forest Hill were built and sold in the 1920s and 30s by the Lang Realty Company, who had developed Balboa Terrace.

Forest Hill integrated in the 1960s, as prominent African-Americans such as Willie Mays and City Supervisor Terry Francois (who had acted as the local head of the NAACP) made their homes in the community. Today there is a significant Asian population in the tract.

For years the neighborhood was best known for its active garden club. Forest Hill was so quiet that in 1971 a newspaper profile called it "An Island of Tranquility Amidst Big City Turmoil." 9 A year later some of that big city turmoil showed up in a series of bizarre and gruesome pet lynchings that took place in Forest Hill Extension. After a few days of sensationalism and headlines, the police identified a teen-aged girl as the killer. 10 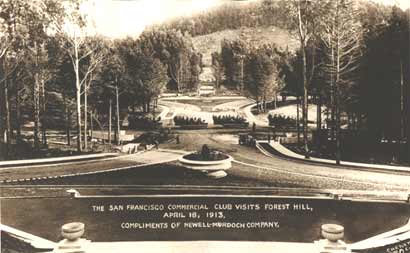