Ocean View was a fine station and a community quickly built up around what is now the intersection of Alemany, Sagamore, Plymouth and Sickles.

The line terminated at Market near Valencia. The route was down Valencia through the Bernal Cut to the Ocean View, down what is now Junipero Serra Boulevard (Highway 280) to San Jose.

At Ocean View was a fine station; streets were soon laid out like the spokes of a wheel around the station and a community quickly built up around what is now the intersection of Alemany, Sagamore, Plymouth and Sickles.

Attempts to subdivide the existing farm land go back to 1870 when the Mission Street Extension Homestead Association put street grids on a map and tried to sell lots. Apparently without success, because in 1883, the Railroad Homestead Association tried it again. This time it was a success and by the turn of the century a fully developed community existed in the Ocean View.

The Ocean View, as a village, was self-contained. It had its own police station, a post office, fire station, bakery, school and not a few saloons.

The geographic center of the Ocean View was the plaza created where the streets came together at the train station. The community built a fountain in this plaza for aesthetic and practical reasons. A fountain is pleasant to look at and the horses were tied up and watered there. Surrounding the fountain were the saloons and stores which made up much of the social life of Ocean View. The Diamond Saloon, Wolf's, the Tell House and Pellegrini's Bayview Bazaar stood on other corners. Pesce's Grocery and Canada's Barber Shop were other social centers.

The neighborhood was about half Catholic and half Protestant. Mass was held each Sunday over the Tell House Bar from 1872 until a small church was built on Broad Street in 1899 and christened St. Michael's. Rev. Lincoln Wirt began a Protestant Sunday school in 1889 - four persons regularly attended in a store on Plymouth.

The neighborhood prospered as the farms and dairies were filled in and the open spaces between downtown and the Ocean View were developed. 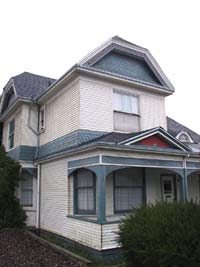 The Ocean Shore Railroad ran through the community in 1906, its roadbed on what is now Alemany Boulevard. Ocean Shore maps show a station near Arch and Alemany, but old-timers have no memory of an actual station there.

One longtime resident recalls a platform built along the tracks, with a flag in a holder on the platform. When a train came in view, a would-be passenger would wave the flag. If the engineer felt so inclined, he would stop the train at the platform so the passenger could board. If he didn't feel like it, the train would simply continue on, leaving the person in a cloud of soot and dust.

In 1904, the Bayshore cut-off was completed and the regular passenger service was discontinued through the Ocean View Station. About this time, the electric Interurban Line was started on Mission, causing a shift of business development to the Mission. The Ocean View never recovered from this abandonment.

In 1926 Alemany Boulevard was built on the old Ocean Shore right-of-way to facilitate the booming auto traffic. The fountain was torn down and the plaza had to be redesigned. The station and Diamond Saloon were demolished and Wolf's rebuilt, but business was on a decline.

The M line was built in 1927 but it was a financial disaster. It lost $96,000 in the first six months. The line struggled along for a few more years, but was discontinued until 1946. The neighborhood was again divided in the early 1960s with the building of the freeway and a bit later BART.

The Ocean View, historically, is gone, but a new community is building with its center at Plymouth and Broad.

A new, individual neighborhood character is aborning - no less vital and interesting than the old. The feelings of community and continuity are still there, to be cherished and nurtured to both ourselves and our children.