Alex Gdovin died from a punch to the chest that stopped his heart in a boxing match.

In researching the early days of the Ingleside and Ocean View neighborhoods, one comes across innumerable references to "road houses," gambling dens, dog and horse tracks—all operating on what was considered the fringe of San Francisco. It's easy to imagine these haunts in colorful, romantic terms: gentlemen in bowler hats and handlebar mustaches, chomping on cigars and playing cards between shots of whiskey.

But the darker side of the businesses that operated outside the law becomes clear with just one personal tragedy. 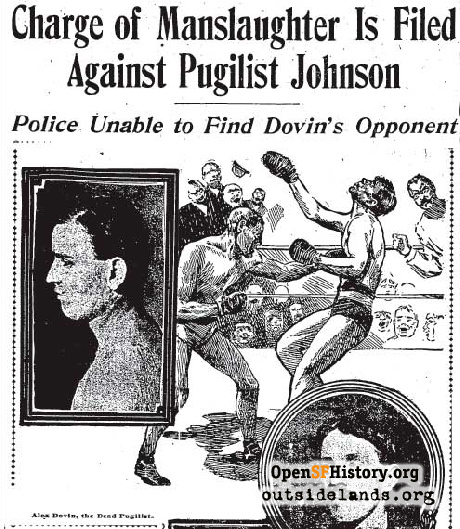 Gabrielle O'Connell-Merel's ancestors came to Ocean View from Austria in the late 1800s, and she has been kind enough to share a sad story still remembered today by her family. Alexander, the patriarch of the Gdovin clan (often shortened to "Dovin" soon after arrival) made a living as a cigarmaker. He and his wife Anna lived in Ocean View in the 1890s at 315 Plymouth Avenue (now 335 Plymouth). They raised their five children and attended St. Michael's, the local catholic church. On the evening of February 5, 1906 the couple was urgently called to the small suburb of Colma, and at the White House saloon they found their eldest son Alex—just 20 years old—dead.

Alex Gdovin died from a punch to the chest that stopped his heart in a boxing match. Although Ingleside and Ocean View had training camps, and San Francisco was becoming a hotbed for prize fights, many matches were staged just across the city line. San Mateo County's law enforcement was more inclined to turn a blind eye to the gambling that accompanied the blood sport, and the fight in rural Colma in which Alex Gdovin lost his life was unlicensed. When he fell at the end of the third round and was found dead by his seconds, the crowd of some two hundred spectators "scattered in every direction".1

The organizers showed no more courage than the onlookers. In the immediate aftermath every person responsible for the match played the innocent. The manager and co-owner of the Colma Athletic Club where it was held was shocked to hear there had even been an event at his establishment:

"'I was startled by the news,' declared [Billy] Roche, 'and said at once that the report could not be true, as I had not received a permit for a fight in my club, and did not know that a bout was to take place.'"

The other co-owner was conveniently away at Byron Springs "for his health," and Roche went on to say that perhaps the owner of the White House saloon might know more as he was known to run illegal crap games.2

W.H. Almon, the man actually responsible for opening the club (who said he got his key from the locksmith who made the lock!) "claimed that he merely went to the pavilion, opened the door and went away, and disclaims all interest in the matches. Yet the posters which had been scattered freely through all the adjacent towns were printed by a San Francisco house at the order of Almon."3

And despite being widely advertised and attended by two hundred people who spent fifty cents each to get in, Alex Gdovin's opponent, "Chiefy" Johnson (another Ocean View resident who, like Alex, worked as a cabinetmaker) tried to act as if they were having a friendly match in a strictly amateur setting: "We were only fighting to let the boys have some fun, and neither of us were trained for the go." Johnson turned himself in to the sheriff a few days later.4

Worst of all, ringside at this illegal lineup of three fights that "nobody" arranged sat the Colma constable who allegedly shared in the box receipts. (He said some enemy of his had purposely misinterpreted a joke he made.) His deputy acted as referee for the match, and said he didn't know who organized the event, though he speculated perhaps it was the fighters themselves.

The San Francisco Chronicle reported San Mateo County had been aroused enough by the incident to consider repealing the ordinance that permitted boxing. The reporter claimed that in addition to Almon and representatives from Colma's fine police department, dog trainer Jack McKeon of Ocean View "together with a few patrons of the Prosek Brothers' saloon opposite to the Ingleside coursing park," were the promoters of the fights. Both boxers, the promoters, the referee, and likely a majority of the audience were Ingleside or Ocean View residents.5

When Anna Gdovin saw her son at the White House saloon that night "she shrieked as she looked upon the face of her dead boy and then kneeled at his side and gave vent to her grief, while those assembled in the room gazed in silence."7