Ninety years ago, J.W. Wright & Co., had high hopes that hoards of people would move to Ocean View Park. 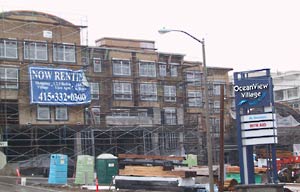 The sandwich boards sit on corners along Brotherhood Way. A new housing and shopping complex is being built in a little niche between Highway 280, Highway 1, the Daly City BART station, and Alemany Boulevard. Brand-new apartments for rent, a Rite Aid drugstore and an Albertsons grocery on the way: "OceanView Village" is ready for the masses to move in.

Ninety years ago, J.W. Wright & Co., had high hopes that hoards of people would move onto the same land. They acted as the exclusive selling agents for "Ocean View Park", a real estate venture from the 1910s that Wright hailed as "The Gem of Subdivisions in San Francisco."

You can see a copy of one of their brochures at the Ingleside branch library. As with most real estate pitches of the time, Ocean View Park was tied to the 1915 Pan-Pacific International Exposition over in the Marina. The cover of the pamphlet trumpets "A City's Preparation for 1915" and the back names San Francisco as the "Exposition City". How Ocean View Park connected in any way to the world's fair on the north end of town is a mystery. One photo inside displays "Automobile Boulevard" (today's Junipero Serra Boulevard), identifying it as a portion of the Exposition Scenic Boulevard, but that's about it.

Other photos show off the "wide, macadamized streets, concrete sidewalks and general outline" of the lots. There's a shot of the clubhouse from the nearby San Francisco Golf and Country Club, and three cottages already built in Ocean View Park by "purchasers, who after looking at other parts of the City, found this the most desirable section, for a home and the most profitable for investment."

I can't easily walk the breadth of Ocean View Park. Brotherhood Way now creates a gully splitting the plat. This isn't a new situation, really. The original development had the Ocean Shore Railway cut through on two diagonals and in the far southeast corner the San Francisco-San Jose train tracks shaved off a few lots. Despite the name, this area was just a hopeful addition to the built-up Ocean View district. On this north side of Brotherhood Way, St. Charles and Chester streets dead-end over the roadway. At the end of one block a group of young men drink beer leaning on a car. Every home on this side was built at least twenty years after the brochure's publication. Arch Street cuts across, however, and I'm able to walk the streets around the new OceanView Village. 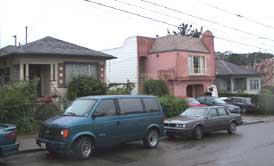 Ah! Here are some of the old bungalows. There's a couple on St. Charles, and on Belle Avenue, just feet from the city limits, two of the cottages shown in the pamphlet still stand. 25 and 51 Belle Avenue have a younger cousin stuffed between them now, but both houses look unchanged. I talk briefly with one of the residents of 51 Belle, and she tells me they are only the second owners of the cottage. Well, J.W. Wright may not have had the opportunity to sell many houses here, but the ones he did have held up rather well.

"Ocean View Park is as fine a residence site as there is in San Francisco. Business streets will also develop here. The lot you buy may become extremely valuable as a business lot."

Outside of the four to five homes I could find from the brochure's era the entire development that was Ocean View Park seems to have been erected in the 1930s. No businesses, not even a corner grocery. But now, with OceanView Village blooming, perhaps that investment promised when your grandfather was born is finally paying off.

Sources: Read the entire text of the pamphlet!