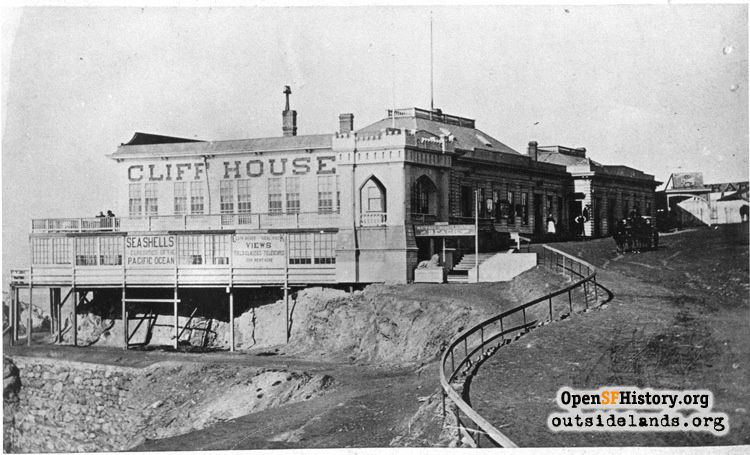 Charles Butler, a real estate speculator, built the first frame-and-clapboard Cliff House on the edge of the ocean in 1863.

“A brisk drive out there early in the morning, while the dew is on the rocks, wakens such an appetite as cannot be caught by sitting down to a regular breakfast at a late hour under the usual conditions. The sea-lions are there upon the rocks as well as the dew, and they are worth traveling miles to see.”1

There have been three versions of a roadhouse/restaurant named the "Cliff House" perched on the northwest edge of the San Francisco peninsula. (Some people, citing various additions and renovations will claim more, but we're going with three.) 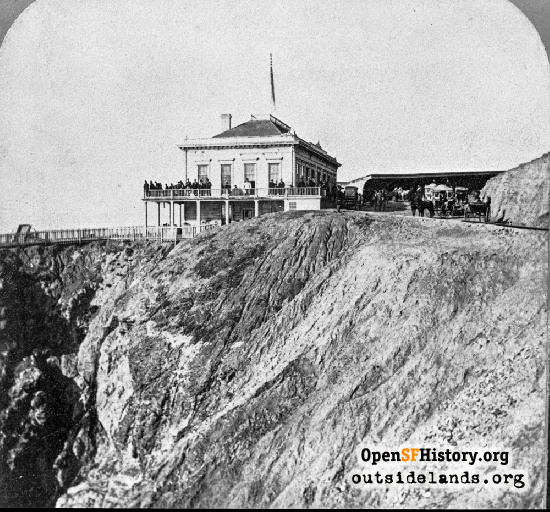 Above the surf of the Pacific Ocean, overlooking Seal Rocks—a cluster of stones that until the 1990s was very popular with basking sea lions—the Cliff House has entertained capitalists and presidents, rapscallions and gamblers, servicemen and women departing to war, natives and generations of tourists, for more than 150 years.

On a rocky point just uphill from Ocean Beach, real estate speculator Charles C. Butler built the first Cliff House in tandem with the Point Lobos Toll Road. The roadhouse’s start and success was highly dependent on the creation of the toll road, which ran from Lone Mountain to the sea, and it may be no coincidence that Butler received financial backing from State Senator John P. Buckley, who was in a position to grease the wheels to get the franchise for the road’s creation and was a corporate officer of the toll road company.

The Cliff House opened on July 4, 1863, with well-known host Captain Junius G. Foster as the manager. Although occasionally described as a hotel, the simple frame-and-clapboard structure served only as a restaurant and bar. The prime attraction beyond the usual food and drink was the view, with windows and balconies offering the wide ocean and the sea lions on the rocks below.

Early morning rides to the Cliff House for breakfast became a fashionable activity, for those who could afford the toll to get there and the menu prices on arrival. After a series of these newspaper paeans to early morning rising and riding to the Cliff House (many interjected with classical poetry to convey the sublimity), Mark Twain in 1864 took his own trip and gave a curmudgeonly, if humorous, account. When the ride, the view, and the sea lions weren’t enough to draw out the crowds Captain Foster booked balloon ascensions and acrobatic spectacles. Seal Rocks proved a great target for daredevil swimmers and wire walkers such as James Cooke and Miss Rosa Celeste, the female funambulist who attracted five thousand people to witness the “greatest rope-walking feat ever performed by a woman.”2 Celeste made the 400-foot journey across to Seal Rocks, 100 feet above the surf, without guide wires for her balance pole, on June 24, 1866.

The Cliff House was expanded in 1868. Presidents Grant and Hayes came to dine in 1879 and 1880. Ordinary folks without horses and carriages, who had to pay as high as 50 cents to take omnibus lines (large coaches pulled by teams of horses) out to the seaside, began arriving in droves when the monopoly on road traffic to the beach ended with the creation and improvement of free roads through the new Golden Gate Park. Beginning in 1883, a nickel could bring a workingman to present-day La Playa and Balboa streets on the Pacific and Ocean Railroad. High society began to abandon the no-longer-exclusive Cliff House for fancier and more elaborate resorts. 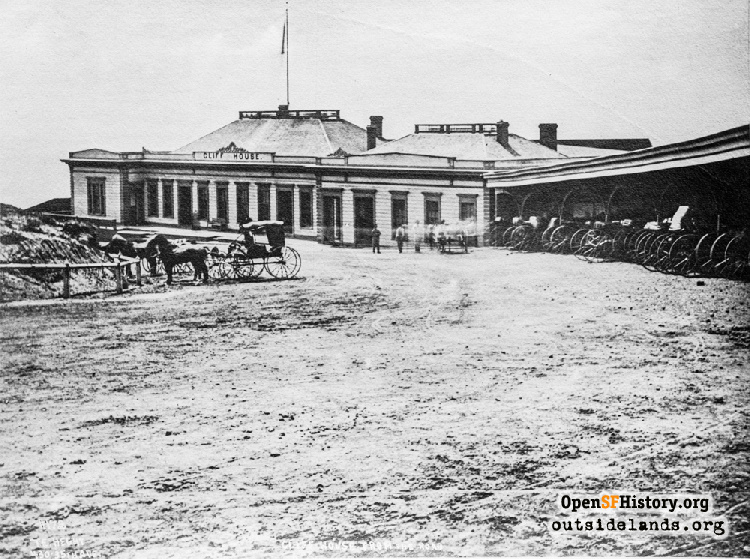 [TEH172 Cliff House from the Road T. E. Hecht] View down Point Lobos Road to the first Cliff House with additions. Carriages parked in stable on right., circa 1870 -

Captain Junius Foster, who still leased the roadhouse, adapted to the loss of business by courting to a more "sporting" clientele. Before long, the Cliff House became known as a den of gamblers and illicit behavior.

“To keep up with the times the Cliff House has descended from its high estate as a two-bit saloon and restaurant of unimpeachable prices, to the condition of a purveyor of five-cent beer, five-cent cigars, five-cent coffee and five-cent sandwiches, with a free look at the seals thrown in. The old bar-room up stairs still retains the old prices, but downstairs is a huge saloon run on the cheapest scale.”3

In 1881, Adolph Sutro purchased the Cliff House and most of the land around it, moving into the cottage on the promontory above. He hired a new lessee and host, James Wilkins, to make it a "respectable resort with no bolts on the doors or beds in the house." Sutro displayed educational material inside, such as rare coins and natural artifacts from his collections, and attracted families to the establishment. Yet another president visited the area in 1891, but Benjamin Harrison, perhaps not insensible to the Cliff House’s recent reputation, instead enjoyed a meal with Adolph Sutro above the Cliff House at Sutro Heights.4

While losing a wing and most of its windows when the ship Parallel exploded on the rocks in 1887, the Cliff House continued to be popular. What a ship of exploding dynamite couldn't do, a simple kitchen fire did in 1894. On Christmas night of that year, the roadhouse that had in thirty years grown to become a San Francisco landmark burned down.

Sutro vowed to rebuild. The newspapers asked him not to get carried away with something too ornate...