The Talking Cat of the Ingleside District

There was also some appeal in whatever mischief one could get into while most adults were still sleeping soundly.

The Talking Cat of the Ingleside District 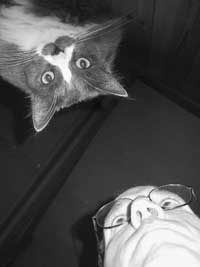 In the late 1950s a regular Walt Disney television program used to air a number of segments about boys getting involved in the most unlikely adventures. One was about "Spin and Marty," who were like modern day versions of Huckleberry Finn and Tom Sawyer. And there's a bit of that in the life of most anyone growing up.

In 1959 I was in the sixth grade at Farragut Elementary in the Ingleside, and I had a good friend by the name of Bill Corkery. Bill was a very popular older kid with a paper route, and he lived on Plymouth Avenue while I lived two blocks away on the hill of Brighton Avenue. Quite often I got up extremely early in the morning to help him on his route, even though it would be cold and dark outside for hours.

Younger kids like myself occasionally accompanied the older ones and learned their routes, as we eventually wanted to earn money on a route of our own. There was also some appeal in whatever mischief one could get into while most adults were still sleeping soundly.

San Francisco had five daily newspapers in the 50s. There was the Examiner, Chronicle, the News, the Call, and the Bulletin. Eventually competition caused the last three and smaller to merge and become "The News-Call-Bulletin", and later even that was absorbed.

The morning papers included the Examiner and Chronicle, and Bill delivered one of those. We would begin by breaking open the bundles and folding each newspaper into a design that was convenient for throwing some distance. One very popular way was to fold them into thirds, then to tuck the edge of one into its opposite edge.

Another way was to fold each paper somewhat like a triangle and tuck in the flap that remained at the top. These were "Tommy hawks," and we tended to use them for all the especially high porches in that area that really have too many stairs.

There were also much thinner papers like the "Shopping News," which was often folded into a square, and "The Progress," which was folded narrow and flat.

On morning after delivering all our own papers, Bill and I went looking for coins along the K streetcar tracks on Ocean Avenue. Somehow Bill projected that "lots of people" were placing the pure silver coins of that time on the tracks for the streetcar's wheels to crush.

He claimed that the pressure of those "Green Torpedoes" passing over would make a coin actually stick to the wheels, and long enough to become lost to their owners; so we would look for any of those fallen-off coins to buy donuts with. Oddly, we often did find coins while walking the tracks.

On another occasion Bill talked me into helping him with a practical joke directed at the manager of a run down and greasy Mobil gas station, which had a huge and really neat sign of a flying red horse. We would drink the contents of two soda bottles from his outdoor cooler without ever having to pay to remove them.

The brands included Coke, 7UP, Fanta, Mountain Dew, Hawaiian Punch, and Royal Crown Cola. The cooler was an unlocked lidded metal box, and the bottles were suspended by their tops between rails until they were released by a little gate.

Bill brought along a bottle opener and two straws, and while it took some effort to make sure the drinks didn't fall and spill inside, we otherwise had little difficulty in getting those free drinks.

On one particular morning we were just routinely throwing newspapers along Lakeview Avenue, near Lee Avenue, when something really strange happened. A huge and rough looking neighborhood dog by the name of Caesar had been following us everywhere, and we both noticed when he suddenly bolted up about forty steps.

Caesar was a former police dog who had a reputation as a cat killer, he tended to roam around unleashed, and regularly chased any people who came over from the neighboring Lee Avenue. This time he was after a white cat with large spots, but it remained sitting coolly and perhaps even fearlessly on the very top step.

Caesar was apparently just as surprised as we were down below, and remained frozen on the stairs just staring. Then the cat turned away, but leaping onto a balcony ledge right behind, made a clean getaway.

Bill and I just looked at each other slack-jawed and bug-eyed for a few moments, then I said: "Did you hear that?" And Bill replied: "I sure did." And then I said: "Well, I'm not going to spoil this by convincing you of anything, but what do you think the cat said?" And without hesitation Bill said: "That cat told Caesar to Go Away - twice."

We were certainly giddy after we realized that we had witnessed something that few people ever would in their entire lives, so after the sun rose we told everyone we encountered. We especially relished getting to the part where we could imitate the skin crawling voice of the cat saying: "Gooooooo Awaaaaaaay," as it always had some effect on a listener.

And while some would react by simply saying: "Yeah, cats are weird." We especially enjoyed the people who looked a bit distressed and came back with: "Maybe you imagined it all." Those were the ones who sincerely hoped we had imagined it, as talking cats certainly clash with what many are routinely comfortable in believing.