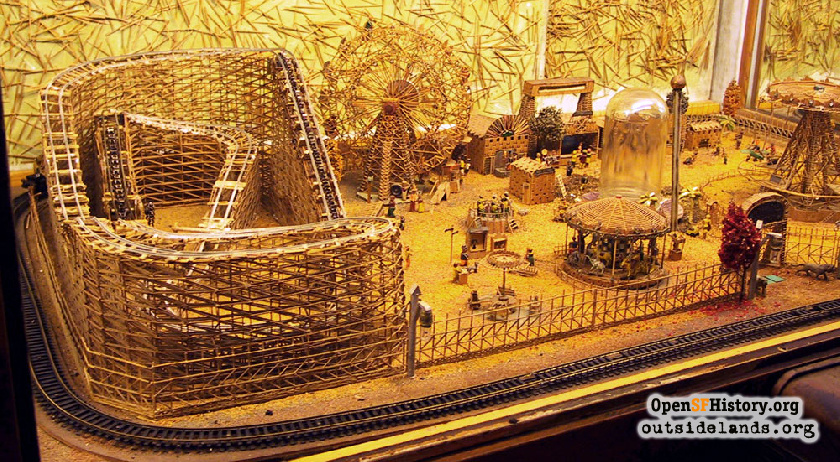 Moving the Musee Mecanique away from Ocean Beach. 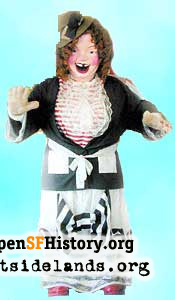 The newspapers have wrapped up the story, saying the Musée Mécanique has been "saved." Local columnists are patting themselves on the back and the National Park Service acts surprised at all the fuss. Park Superintendent Brian O'Neill has assured us via form letter and his public relations staff that the whole matter is being resolved.

In September the collection of antique coin-operated amusements faces eviction from its long-time home in the basement of the Cliff House, ousted by renovation work on the building. All along the way, for a decade, we were told the Musée would find itself in nicer digs, as part of the new visitor center to be constructed up the street on Merrie Way.

Then owner Edward G. Zelinsky pointed out that here, just six months from the renovation work, his collection still had no guarantees. The funding for the visitor center is a rumor. How long were his machines to sit idle in some warehouse? Did he have to auction off pieces to pay the storage rent? The public outcry, the letters, phone calls, protests, and petitions crystallized the importance of the Musée Mécanique to San Franciscans. And now O'Neill tells us they'll "find an arrangement that is amenable to everyone."

I hope it's true. Mr. Zelinsky acts a bit more optimistic that the Park Service will find a temporary home for his collection. But the public agency spent years planning the Cliff House renovation without securing the Musée's future. And it doesn't take more than a quick look at the peeling paint on the ceiling to see that the Park Service isn't the most assiduous of landlords. I don't blame Ed Zelinsky for thinking his magnificent hoard of doo-hickeys could go into storage for a projected two years and end up there for twenty.

In a way, I feel sorry for the Park Service, beholden to the Department of the Interior and the vagaries of congressional spending, political appointments, and changing priorities. It faces dogs-on-leash brouhahas and budget cuts, the wrath of both the preservationists and profit-minded. All the same, and despite the notable integrity of its volunteers and staff, I don't trust it farther than I can throw a Giant Camera.

Ceiling in the Musee Mecanique in the basement of Cliff House, 2002. - WNP photo

These days even the poorest American child appears to have access to a game system at home. I'm from the first generation of video game kids. I remember walking home from Star of the Sea Grammar school and stopping at Front Room Pizza on Clement to play a wonderful new invention: Pong. A crude video representation of tennis, Pong later arrived in our household as a home version. Then it was the Atari, the Nintendo... Game systems sat in coils of cord beside our TV until my youngest brother fled the roost.

When our parents got us out of the house for some fun, it was to the arcade. At night we went to Fisherman's Wharf to play tourist on the Earthquake and Haunted Mine rides, the Wax Museum and "Ripley's Believe it or Not" exhibits. Daytime trips were reserved for the Musée Mécanique.

Amazing what a quarter can buy you! My personal favorite has always been the baseball game. If you can keep the ball in play your game can last forever. A big baseball fan, I just think it a miracle to see the almost mythological names written in front of the fielding statues: Medwick, Appling, Averill, Terry... 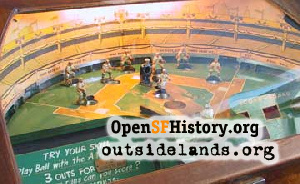 Every trip to the Musée someone had to start up the Carnival. As big as our bedroom, the scene created by an old carnival employee waited to come alive. When Dad or Mom gave in, we'd lean against its glass wall and scoot around all four corners to see the side show barker, the aeroplane ride, the romantic couples, the gorilla, and the customers at "Harry's Hash House" all move slightly by the gears hidden underneath.

My friend Rochelle ("whenever someone visits from out of town, I bring them here") talks about how even today there's a "lurking" air around the Carnival as the patrons linger to see who will drop the coins to set off the carny music and start all the dolls wiggling. She comes to the Musée for the photo booth and proudly mentions how a film strip of her smiles is stuck on the "Wall of Fame" in the repair room.

No doubt "Laffing Sal" is the star of the place. An oversized woman in a glass box, she gyrates, flaps her arms, and shows off her gap-toothed mouth while a recording (reportedly made by a man) starts cackling away. This Sal was apparently a back-up at Playland-at-the-Beach just down the hill. After waiting in storage for years like an expectant understudy, she now has her turn to shine. (The Laffing Sal that welcomed/scared visitors at Playland's funhouse is owned by collector John Wicketts.)

As a young man I took dates here. We'd make the circle past the Sutro Baths site, where much of the collection had its origin. Other machines came from Playland, some from Europe, but they all call back to a time when the oceanside meant roadhouses, rides, stunts, and spectacle. Families took whole mornings to get out here and spent the entire day. Now I bring my daughter after school, and it's just a marvel that a hokey robotic fortune teller can entertain today's five-year-old. 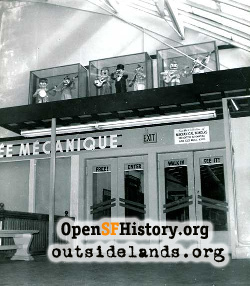 In the burst of attention the Musée received this last month, I found myself interviewed by a news crew. They asked me to explain in a sound bite why a basement full of mechanical gizmos, flipcard movie machines, player pianos, and chuckling robots is of historical significance. I said each machine offers a moment our grandparents may have experienced. This isn't a movie, a photograph, an oil painting hanging in a museum. This is three chances to hit a steel ball against the 1937 World Series team. This is a miniature farmyard of dolls come to life, a ferris wheel of toothpicks made by convicts, metalmen boxing matches, and Susie the puppet dancing the Can-Can.

What I should have said about the collection that Mr. Zelinsky and his son shepherd into a new century is "Where else can you get a piece of heaven for twenty-five cents?"

Update: At the GGNRA Advisory Committee Meeting on May 28, 2002, Superintendent O'Neill announced that an arrangement to temporarily house the Zelinsky collection in either Pier 45 or the ferryboat "Eureka" was imminent. He also said the funding for the permanent home was "in the works." Read Peggy Vincent's letter at the same meeting, urging the GGNRA to keep the Musée in the Cliff House!

July 17, 2008: Rumor has it that the collection is again facing limbo. After moving successfully to Pier 45, the Musée can't get more than a month-to-month lease from the Port Commission. Meanwhile the work on Merrie Way is progressing without plans for the Musée's return.

Links:
Bill Griffith's Zippy the Pinhead does his part to highlight the Musée plight! (Thanks Bill!)

Read more about "Laffing Sal," her history and how she's made, at the Laff in the Dark site.