History of the lion statues that guard the gates of Sutro Heights.

Historical consultant, former National Park Service Ranger, and current WNP member John Martini has always been curious about the history of the two lion statues that flank the entrance to Sutro Heights Park. The big cats once formed part of an elegant entrance gate to Adolph Sutro's cliff-top estate, and have been misidentified in some publications as copies of the lions at Trafalgar Square in London. The massive redwood gate was removed at some point and the city acquired Sutro's land for a park after his death.

John found a photo in the Bancroft Library taken around 1885 that identified the right-hand lion as "Lion at Main Gate by Geefs." Aha, a clue! Some more research on the Internet revealed Geefs as the Belgian sculptor Guillaume Geefs (1805-1883). That made sense, as Sutro purchased his replica statuary in Belgium during the early 1880s. 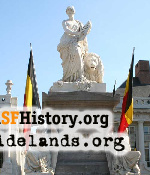 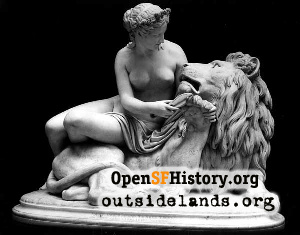 John noted "how similar the lions in Europe are to the ones in the park's collection, especially the mouth and paws, although the Lion In Love seems to be having a much better time than the pair at Sutro's." 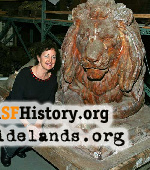 One of the original lions that flanked the gate to Sutro Heights, now in storage at a GGNRA facility. -

More from John: "The entry gates to Sutro Heights disappeared in the late 1930s, probably as part of an ill-advised WPA "clean up" of the Heights when many wooden buildings including Sutro's house were demolished. The original lions survived, though, and remained in place for the next forty years. They were in pretty bad condition by 1977 when the National Park Service assumed control of Sutro Heights, missing sections of their tails and paws, and badly weather-worn by the elements. In the early 1980s the Park Service hired a sculptor cast copies of the pair, along with Diana and The Stag, and retired the originals to safe storage at the GGNRA museum storage facility."

Another west SF connection: Geefs also did the bronze statue of the Roman Gladiator in Golden Gate Park across from the DeYoung Museum.