An 1895 article on the history of today's Geary Boulevard. 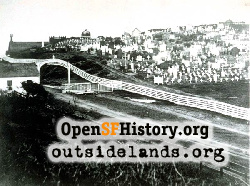 Looking southeast at the east toll gate of the Point Lobos Road, now Geary Boulevard, circa 1865. Calvary Cemetery behind. -

This is a transcription of a May 6, 1895 article in the San Francisco Call newspaper. Point Lobos Road is now Geary Boulevard in the Richmond District.

Once the Popular and Fashionable Toll Road Out of the City

Busses Carried Passengers, and a Round Trip Cost One Dollar

The sale to-day by auction of 160 lots in the Richmond District, that belonged to the San Francisco and Point Lobos Road Company, will wind up the affairs of a corporation that was dissolved some time ago.

The Point Lobos Toll Road Company, of which Dr. H. Gates was the head and front, opened what is now known as the Point Lobos avenue as a toll road early in the sixties, and at about the same time the late Junius G. Foster opened the Cliff House at the terminus of the road. The new road was operated in opposition to the Ocean House road, which started from Seventeenth street, ran over the hills by the old Ocean House race track and the Lake House to the ocean beach, for many years the only route for reaching that portion of the county to view the seals, unless one was willing to trudge over six miles of sand dunes. 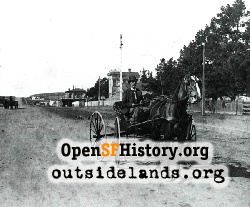 The new road became popular and for many years it was the fashionable drive out of the City. No sight-seeing was complete unless it included a drive over the Point Lobos road to Captain Foster, the guardian of the seals. To enjoy a ride over this road those who held the ribbons were forced to pay toll in going from the City at the toll house, which stood on the north side of the road almost opposite what is now known as Masonic avenue, the thoroughfare that leads to the Masonic Cemetery. The driver received a ticket, which he dropped at the second gate, which stood near where the road took a turn and was down grade to the Cliff.

In 1862 the late John A. McGlynn, who had had experience in running busses for the accomodation of the public (for in those days there were no horsecars, nor cable-cars, nor electric-cars), operated a line of omnibusses over the new road. They started from the corner of Kearny and Clay streets and ran out Kearny street and then westward, passing Dr. Gates' beautiful gardens, fronting on Fillmore street, occupying two blocks from Post to Sutter, and from Sutter to Bush, until they reached the road at Cemetery avenue, as Central avenue was then known, near Geary street. Then the busses, with their loads of passengers on pleasure bent, rolled out to the Seal Rocks. For this ride the sum of 50 cents was charged. Now the same distance is traversed in one-tenth of the time for a nickel. 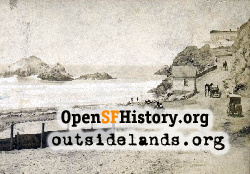 In 1864, when the Central line of streetcars established its western terminus at Cemetery avenue the bus company made the avenue its eastern terminus and reduced the fare one-half.

About twenty years ago those who operated the road having in mind a desire to make it more attractive constructed on the north side, commencing at the line of Twenty-third avenue, a straightaway half-mile speed track, and over this many of the best horses that ever ran around a track including Norfolk and Lodi, were speeded. About the same time Jim Eoff, a noted horseman, opened near the speed track the Agricultural Park and race track, which, however did not prove a successful venture.

With the increase of population the City expanded, people moved westward and located, new thoroughfares were opened, the Richmond District began to be known, horsecars superceded the omnibusses, the tollgates came down, a car line was operated on the Point Lobos road up to within a short distance of the Seal Rocks; then came the lines of steam cars that drove the horses out of business, and finally the Point Lobos road became an open public thoroughfare with name changed to Point Lobos avenue.