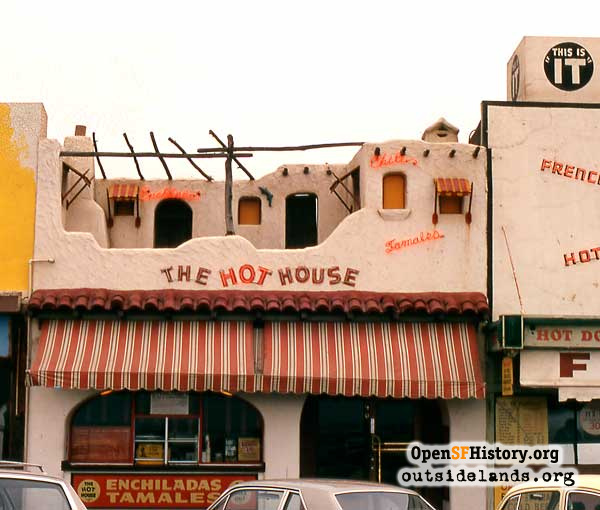 Streetwise - Savoring the Past

Memories and recipe resurrection from The Hot House restaurant at Playland.

Streetwise - Savoring the Past

Recent excavations in the Outside Lands have uncovered historical artifacts related to the history of Merrie Way, a one-time amusement village located above the Cliff House and Sutro Baths, near the corner of Point Lobos Avenue and El Camino del Mar. Adolph Sutro filled this area with many attractions that were originally part of the Midwinter Fair of 1894, held in Golden Gate Park, and he operated the spot as the Sutro Pleasure Grounds, from 1896-1900.

Another nearby archaeological dig, this one organized by a group of San Francisco high school students in 2012, managed to unearth the blue-and-white geometric-patterned interior tile floor of a greenhouse/conservatory that was adjacent to Sutro’s residence just across the street from Merrie Way. Sutro’s home and the conservatory, built in the 1880s, managed to survive the 1906 earthquake, only to be torn down by the city in 1939 when they were barely 50 years old. The re-emergence of the old tile floor was nice little peek into the past.

Just recently, a bit of sleuthing by this author has managed to uncover yet another popular artifact from this area—one which some people might consider to be the greatest lost treasure of all, perhaps rivaling the Maltese Falcon—the popular but long-gone food of The Hot House restaurant, once located at Playland-at-the-Beach. 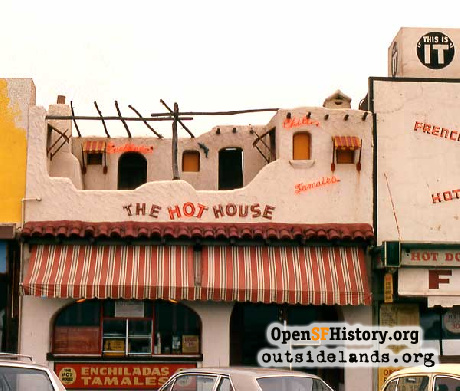 The Hot House, a Spanish-inspired restaurant at Ocean Beach. Later moved to Balboa Street near 42nd Avenue., circa 1970 - Photo by Dennis O&#039;Rorke

The Hot House operated at 750 Great Highway for nearly 40 years, from the early 1930s until the closure of Playland on Labor Day weekend of 1972. Originally operated by Barney Gavello, the restaurant dispensed Mexican food to appreciative crowds for decades. It’s been estimated that on peak weekends during the World War II years, The Hot House sold up to 12,000 tamales to Ocean Beach visitors from both the steamy, fragrant interior—with its cream-color stucco walls and hand-carved dark-wood counter and stools—as well as from the take-away windows facing the waves.

In a uniquely San Francisco twist, The Hot House, unlike most other purveyors of Mexican food, always served baskets of dark-bake sourdough French bread, with generous quantities of butter alongside, rather than the more authentic stack of tortillas. In addition, spaghetti was a featured menu item for decades. Food from The Hot House still elicits fond memories for thousands of San Franciscans, unlike most other places before or since. On the nostalgia scale, it’s right up there with Herman’s Potato Salad, Blum’s Candies, Larraburu French Bread, and Herb’s Meatball Sandwiches. 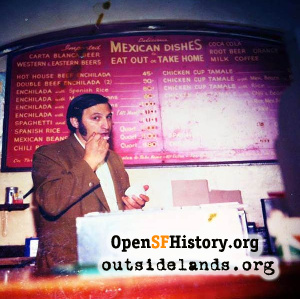 Gavello must have felt the decline of Playland approaching when he sold his beloved restaurant just a few years before the amusement park breathed its last. New owners Juan Faranda and Jose Robleto took over with enthusiasm, continuing to work with the time-tested recipes that had been pleasing the crowds for decades. Faranda, of Sicilian-Peruvian background, was born in Lima, Peru in the late 1930s, and had been living in San Francisco since his teens. As the manager of an adjacent Playland eatery, The Pie Shop, he was well acquainted with the outgoing Gavello and knew that he and his partner could maintain the quality and the atmosphere of The Hot House even after Gavello’s retirement.

The new owners took over in the late 1960s, still serving the original 1934 recipes, much to the delight of loyal customers. There continued to be a lively, festive crowd at The Hot House every day of the week—how could it be any other way, when it was surrounded by the excitement of Playland?—and there was seldom an empty seat in the place, right up until the time the wrecking ball struck in 1972.

Once Playland closed, Juan Faranda bought out his partner and moved the restaurant to a new location a few blocks away at 4052 Balboa Street, where it continued as a family business for nearly a quarter of a century, even expanding into an adjacent building that once housed a drugstore. Sadly, though, many of the original loyal customers thought The Hot House had vanished along with the rest of Playland, and perhaps there was too little advertising done in those days. One of my Mom’s bingo-playing companions tipped her off about the new site in the early 1980s, and it was the first that our family had heard of it, but we soon became regulars. 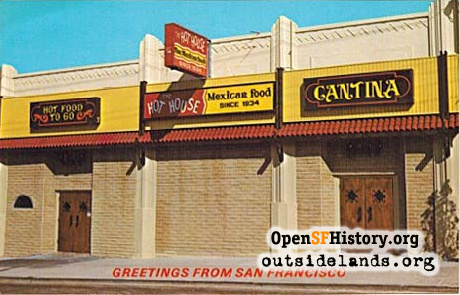 All throughout the restaurant’s long run on Balboa Street, the owner often found himself in the kitchen, ensuring that the staff was preparing the food precisely according to the original recipes and not taking any unauthorized shortcuts to save time or skimp on crucial ingredients. With help from his wife and children, The Hot House continued to thrive, though on a smaller scale. Juan finally decided to retire in 1996, and closed the restaurant after a total run of more than 60 years.

Recently, his 43-year-old son Eric was attending a Giants’ game with friends, when the talk turned to classic San Francisco food. Eric was astounded that while so many people his age remembered Doggie Diner, few knew of The Hot House. He decided then and there that a whole new generation of San Franciscans deserved to know exactly why the place was so fondly remembered and what the excitement was all about. Juan, now in his late 70s, agreed to turn those classic recipes over to Eric, but with a clear understanding that they must never be given away.

As a trained chef with a culinary degree, Eric has now resurrected The Hot House menu and has started a once-per-month catering business, delivering food orders throughout the Bay Area from his home in San Mateo County for a reasonable price, plus a delivery fee. While the 80-year old recipes remain a family secret (I know. I tried unsuccessfully to get him to share the luscious enchilada sauce recipe with me), he and his family know the powerful draw of both food and nostalgia, and he hopes to bring back some lost memories for many of us. 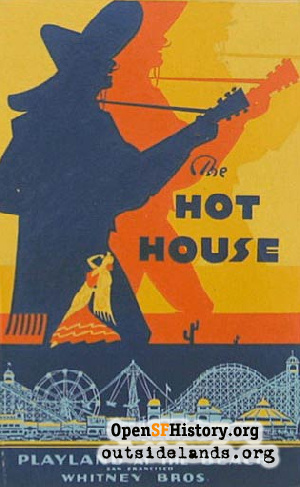 Ad for The Hot House Mexican Restaurant at Playland. 1940s? -

His toughest challenge was rescaling ingredient proportions to yield a couple of hundred servings, rather than several thousand, because things like salt and spices tend to react differently when proportions are changed—sometimes they are stronger than desired, and sometimes weaker. Eric laughs as he recalls his father’s recipes with measurements expressed not in “cups, tablespoons, teaspoons, pinches, and dashes” but rather “barrels, sacks, pounds, gallons, and potsful.” With his parents watching closely over his shoulder, Eric has now mastered the correct measures of ingredients that are required to create the precise taste and texture of the classic dishes, but in manageable quantities—and his customers enthusiastically agree that he has done so to perfection as soon as they take that first bite.

Many of his loyal fans are known to schedule family get-togethers around Eric’s once-per-month delivery schedule for enchiladas, tamales, chili con carne, rice, and beans, and he is currently working on a business plan to expand the operation to include FedEx overnight deliveries packed in dry ice. Ultimately, this enthusiastic San Francisco native and graduate of Archbishop Riordan High School would like to resurrect The Hot House in a classic San Francisco neighborhood location, complete with some iconic Playland décor and memorabilia.

Just for the record, I recently took along a casserole filled with authentic enchiladas and sauce from The Hot House to share with two different groups of friends for pre- and post-Thanksgiving dinners. As we were eating, I could almost feel the ghosts of the past nudging me, as they reached down the long wooden counter for another slice of dark-bake sourdough French bread and a couple of pats of butter. The food and the company were excellent, as we all relived a few precious moments from our neighborhood’s beloved culinary past, recalling the sights, sounds, and smells of dear old Playland.

For more info, contact Eric Faranda at hot.house28@yahoo.com or via his Facebook page, The Original Hot House From Playland.

Epilogue: So good was the food, and so memorable, that several times over the last few years, the WNP message boards have carried recipes—all of them identified as being “from The Hot House at Playland”—though just for the record, Eric Faranda laughs and responds with an emphatic, “No, Not quite,” to each of these drastically different versions—only he knows the real secrets behind the sauce. Every single one of these allegedly “authentic” versions is simply the stuff of urban legend.