A long-time parking lot above the Sutro Baths site was once home to "pleasure grounds."

They've done some digging up on Merrie Way, the parking lot and promenade with the great view just east of the Cliff House and Louis' Restaurant (open again after renovations). In August 2011, the National Park Service wrapped up a month-long public archaeology program in search of artifacts on the site before a new Visitors Center opens on the strip.

But what did they expect to find, and why is it called Merrie Way? Although it's been spruced up in the last few years, as historian and former National Park Service ranger John Martini wrote in 2004, "a dead-end dirt parking lot, scoured by Pacific winds and bordered by glowering cypress trees, there certainly isn't anything about it that's 'merrie.'"

Adolph Sutro had bought most of the land around the Cliff House in the 1880s and in the early 1890s was doing his best to remake the old roadhouse and its environs into world-class "pleasure grounds." Sutro Heights, his own estate on the promontory above the Cliff House, had ornamental gardens, terraces and stairways elaborated with Greek statuary—all open to the public. After a fire destroyed the Cliff House, Sutro commissioned an eight-story Victorian building to replace it. In the cove to the north he started work on a massive natatorium, Sutro Baths, for indoor swimming, concerts, and a museum of curiosities. He went into direct competition with the monopolistic Southern Pacific company to create and operate his own steam train line to provide affordable public transportation to his oceanside attractions.

Despite all the new construction, Sutro also had a bit of the garage-sale browser in him. When the transit companies offered obsolete horse cars for sale, Sutro picked up one to use as a concession stand on a beachside lot south of Golden Gate Park. The humble "coffee saloon" started a boom of transit-car rentals that became the bohemian enclave of Carville-by-the-Sea. When the contents of Woodward's Gardens, a Mission District amusement park, were auctioned off in 1893, Sutro bought benches, taxidermy specimens, statues, and a pipe organ for use in Sutro Baths. Another great opportunity for bargains arose the next year when the Midwinter Fair closed in Golden Gate Park. 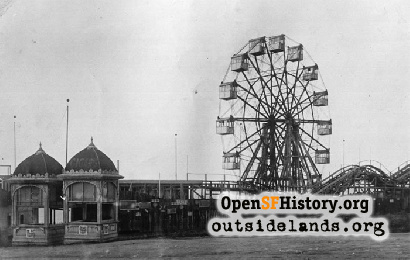 Merrie Way, with stands from Midwinter Fair, the Firth Wheel and Scenic Railway rides, about 1905., circa 1905 -

The California Midwinter International Exposition of 1894 was a lesser spin-off of the great Columbian Exposition in Chicago in 1893. That massive celebration, meant to commemorate—a year late—the 400th anniversary of Columbus' "discovery" of America, attracted 27 million attendees from across the world, remade Chicago both materially and in reputation, influenced for a generation the fields of art, architecture and city planning, and introduced to the United States the concept of a fair "midway"—an amusement zone specifically created for sideshows, attractions, and rides.

M.H. de Young, owner and editor of the San Francisco Chronicle, had been a commissioner for the Columbian Exposition, and had the idea to have a fair in Golden Gate Park to highlight California's mild winter weather in hopes of attracting people and industry to San Francisco. De Young cherry-picked exhibits, performers, themes, and rides from the Chicago fair for San Francisco, and the Midwinter Fair opened in Golden Gate Park on January 27, 1894. The music concourse, the Japanese Tea Garden, and the de Young Museum all have their origins from the 1894 fair, but most of the exhibits and rides were removed or destroyed after closing day, July 4, 1894.

Sutro grabbed what he could get, especially fair concession booths and rides. Between the terminal station of his steam train line and Sutro Baths he relocated some of the fair's most dramatic attractions. Riders exiting the train station for their day of amusement at the oceanside would be greeted by the towering Firth Wheel, what we would call an enclosed Ferris Wheel today. (George Ferris invented the ride for the Columbian Exposition. De Young got J.K. Firth & Co. to make him a smaller one with enclosed carriages for the Midwinter Fair.) One hundred feet in diameter, the wheel had sixteen carriages, and offered dramatic views for those who took the 20-minute ride. (Did thrill-seekers have longer attention spans in the 1890s?) The massive wheel, illuminated by hundreds of electric lights, acted as a beacon for ships approaching the Golden Gate at night.

Alongside the Firth Wheel was the fair's "Haunted Swing," a glider-bench that swayed passengers back and forth in the dark using a movable room that created the illusion of circling 360 degrees. Sutro later brought in the Scenic Railway, a roller coaster of sorts, very mild by later standards. The strip of attractions, complete with peanut, beverage, and chowder stands, and likely haunted by entertainers like Johnny the Birdman, was first called "Sutro's Midway Plaisance," copying the name of the amusement zone at the Chicago exposition. Soon, and for unknown reasons, the zone changed in designation to "Merry Way." 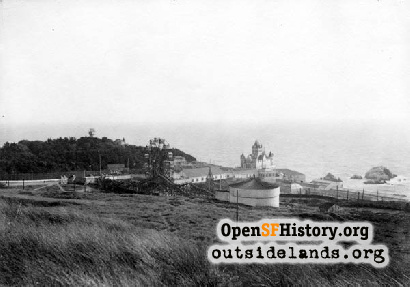 Sutro died in 1898. The pleasure grounds didn't last much longer. As an investment the enterprise was unprofitable and the salty ocean winds and fog probably made maintenance of the old fair rides a headache. Emma Merritt, Sutro's daughter, had most of the attractions closed by 1899. The Firth Wheel lasted until 1911 when a winter storm damaged the clutches and the rusty wheel began rotating, without passengers, uncontrolled in the wind. On March 14, 1911 the monument was toppled for the junkman.

Sometime before 1920 the strip's name changed to the Middle English spelling of "Merrie Way." No one is sure how or why.

So what did the archeologists find this summer up there on the bluff? Short-lived as it was, Merrie Way produced a good amount of tantalizing garbage to unearth a century later. Remnants of several of the food concession stands brought over from the 1894 Midwinter Fair have been unearthed along Point Lobos Avenue. Steel ride structures, charred wood foundations, and lots of dropped nickels were discovered, along with bottles, enameled signs, pieces of window glass with advertising, and hundreds of pounds of dumped oyster shells from the chowder shop.

In the 1920s a more successful beachside amusement zone developed down the hill between Balboa and Fulton streets. Playland-at-the-Beach lasted decades longer than the Merrie Way pleasure grounds and I now wonder what recreational detritus might be found in the sands around that Safeway?