Streetwise: Birth of a Garage

The changing face of the Richmond District

Birth of a Garage 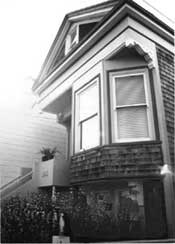 My brother visited from his home in Seattle, and while we drove around showing his wife the town, he suggested we go by our childhood home on 11th Avenue.

About a year before, I had seen the two-unit house for sale in the paper for $689,000. In 1999 everything sold for more than the asking price and I again had to adjust the inflation scale inside my head. The humble San Francisco building where a lower middle class couple raised their children was now worth a small town in Ohio.

For all the changes in the city the blocks of the inner Richmond District look much the same as they did in the early 1970s. We noted that the grocery store on the corner of California Street, which had turned into an antique store in the 1980s, was now an office.

As we rolled onto our block I pointed out where the Jue family lived, and as my eyes swung back to the opposite side of the street, I stopped in mid-sentence.

We stopped the car in the middle of the street and all piled out to stand in front of the house, stunned.

Our home had been stripped to the frame, looking like nothing more than a coloring book outline of the building we remembered. We stared through the space where our basement apartment had been, straight into a weedy backyard. I just couldn't believe it.

After some silence, and my brother's muttered curses of disbelief, I became aware of a car slowly stopping behind ours. A middle-aged woman got out, eyeing us suspiciously.

"Do you own this now?" I asked her as she shuffled up to us.

She nodded curtly. I smiled, trying to allay any suspicions of our interest. "We grew up here."

"Oh," she spoke for the first time, unimpressed.

"It was a nice place to live."

"Too small," she said, and walked onto the property, headed through the skeleton towards the backyard. She was dressed for shopping with her purse on her arm. I couldn't imagine what she had plans to do. Pull some weeds from the sand? Check the timbers for splinters? I suppose she walked on the property, leaving her car double-parked on the street, to make a point to us: she owned it. We took the hint and left in a daze.

A few months later, I swallowed my sadness and drove by again. As I had guessed, a double-car garage replaced the ground-level flat where five LaBountys had eaten Thanksgiving dinners, blown out birthday cake candles, fought, made up, slept, and played. 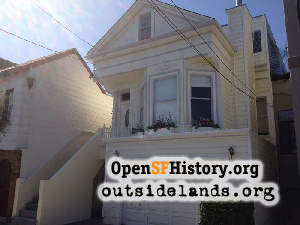 Responsibility to a House

Much of the demolition and reconstruction in the city has been defended as a necessity in the crunch for housing. But our building had nine residents in 1975, with the four McEacherns living in the main unit. Now it probably has two or three people in it, total, with room for two cars.

I understand the idea of ownership. I can see the argument that a person who spends $800,000 for a house should have the right to make it comfortable. And even if the owner I met that day had gutted the home for resale, in this country we encourage individuals to make that investment and enjoy the profits.

On the other hand, I feel an unspoken responsibility to respect the integrity of the places I've lived. Taking a room where some beloved daughter or husband may have passed away, and turning it into a garage just doesn't seem right.

Lucky are the edifices that housed someone famous, or that represent some architectural style currently in favor. Societies and agencies fight for them. The beach cottage for sale on Great Highway has been noted as "threatened" by the National Trust for Historic Preservation, but a less interesting family house three blocks north is slated to be demolished for condos.

The houses in the western neighborhoods, most under 100 years old, are in particular danger of being modified, remodeled, altered beyond recognition, or destroyed. Many were built in "cookie-cutter" developments, and so are granted no historical significance.

But I ask you to walk some of those Sunset District blocks. There's an intrinsic, clean, serenity in the repeated patterns of these small family homes. With a front garden or paint-color choice, each owner can slightly reinvent the model without disturbing the satisfaction of these recurring shapes sliced out of the overcast sky.

Some may find it hard to see those Doelger-designed and Gellert-built houses as beautiful. Unlike Victorians, no one will make any money putting a row of "Sunstream" homes on postcards. But tastes change. The WPA Guide to California, published in 1939, opined that the city succumbed to "an epidemic of Victorian pestilence," and that "thousands of Victorian horrors were destroyed in the earthquake of 1906."

Let's all fight to remember. Let's all resist destroying what we have for "progress" (or for space to dump all the stuff we bought, but don't need).

Look around your home and remember your life in it: the joyous, the tragic, the momentous, and even the mundane. Do you want someone to be parking a sports utility vehicle over it?

Update: The building went on the market in March 2001, reportedly for $2.5 million dollars. It does seem that a unit was put in behind the garage, again creating the address 139 11th Avenue.