Over 100 years ago San Franciscans were entertaining electricity from the ocean as a legitimate solution to some of their power problems. 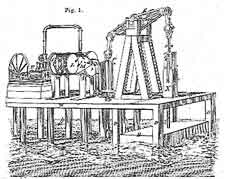 In 2003 the San Francisco Board of Supervisors passed a resolution allowing for a tidal energy pilot project in the bay. The project, sponsored by Board President Matt Gonzalez gained little attention until a few months later when he jumped into the mayoral race at the last minute. Tidal energy was included in his platform and appeared on his campaign literature. As a result, the project was discussed in mayoral debates and articles written about Gonzalez included tidal energy. The project gained praise from some and ridicule from others.

And while this was happening, San Franciscans were for the first time in over a hundred years entertaining electricity from the ocean as a legitimate solution to some of their power problems.

In California the idea of power from the ocean has been pursued since the 1870's. Experiments have taken place as far south as Imperial Beach near the Mexico border and as far north as Trinidad, in Humboldt County. The two biggest successes were built in the 1890's in San Francisco and Santa Cruz.

Although there have been many failures, the perseverance of these early Californians sheds light on their ingenuity to make use of their landscape and resources. Their efforts were chronicled by their local newspapers and many of these anonymous newspaper reporters did an excellent job of reporting on the drama and aspirations that surrounded many of these machines.

Seen over time, what begins as a dream and run of unsuccessful pursuits appears to look more like the steady progression of an evolving knowledge and improved technology.

"In his mind's eye the inventor saw the new boat traveling the waters like a being of life, riding the billows sea-serpent fashion, independent of steam or other expressive motive power, enjoying the tempests and fairly exulting in the storms..." 1

So begins the tale of "The San Francisco Self-Propelling Boat: Disastrous End of a Grand Experiment" as reported in the New York Times in May of 1868. The boat was, from the power of the waves, supposed to generate the power to run itself. The more powerful the waves, the faster the boat was supposed to go. It was invented by a mechanic named Robertson and constructed for about $8,000.

Mr. Robertson set off with three other passengers and a ten day supply of food from Meiggs' Wharf in North Beach (between Mason & Powell), for his boat's maiden voyage. He had decided against a simple trip around the bay and had instead chosen to venture out onto the ocean.

"She was hardly clear of the wharf when she swung around broadside to the tide and commenced bobbing and ducking in a most unpromisingly perverse manner---refusing to obey the helm at all. She made very good time floating with the tide, sidewise instead of endwise but while the wheels revolved they did not seem to give the boat any additional speed... The motive power being in the water, not on the boat..."

The inventor insisted that all the boat needed to work was steady wave action. The boat continued on until it had been carried just outside the headlands of the Golden Gate where it "went over the bar into the rough water and then went over itself". The inventor and his party then departed in a small rowboat and were rescued by a nearby pilot boat.

"...The steam tug Rescue was in the vicinity and her Captain thought he could tow the wreck back to San Francisco for about $500 but the inventor did not appear to think it worth being rescued at such a figure, under the circumstances and it went on Chinawards, or otherwards, on its own hook."

The San Francisco Self-Propelling Boat appears to be the earliest experiment with wave-powered vessels in San Francisco, if not in California. Like many of the ocean powered inventions in California that followed, particularly wave powered ones, it ultimately mocked its inventor publicly and was then swiftly abandoned in return.

In the 1870's, Californians began to establish themselves as inventors of ocean powered technologies. In that decade there were six tide motors patented in the United States and one of those was from an inventor in Oakland. Of the four wave motors patented, three were by San Franciscans and the one patent for a "wave-power for propelling vessels" was by an inventor in Elliot, California.

The earliest of the patents to a San Franciscan was to Charles Buckner in 1873 and then another in 1875 for his improvements in wave-power machines. William Filmer followed in 1878.

Mr. Henry Newhouse of Oakland patented an improvement in tide-powers in 1877. "To utilize the tide for a water-power, and preserve a continuous power by means of the arrangement of a reservoir the catch the water at high-tide, and a discharge-basin to let the water out at low tide and shut it out while the tide is rising." 2

Mr. Newhouse's invention caught the attention of the Argonaut, which proclaimed that it was "the ultimatum of something which engineers have been puzzling their brains for years". Newhouse's tide machine was intended to be used in the pumping of sea water to flush sewers, clean streets and conserve fresh water. It operated at a full 35 horsepower even at the lowest tide. The article also described some of the problems manufacturers of the 1870's faced using water power from rivers to run their mills and how much easier tidal power would be:

"...In the Spring, as the snow melts, the breaking of the dams in the river and the carrying away of wheel and mill by a sudden freshet, are matters of common occurrence. In the Fall, when the water is low, the mill is idle for lack of power. To supplant this, we have the rising and falling tide, to fill and empty basins, with the regularity of clock work. Then again, the power is not far away in the mountains, difficult of access, but here at our very doors,...". 3

In December of 1881 the San Francisco News Letter ran a small article about the tremendous potential of the wave motor developed by a Californian named John W. Swailes. His invention was to be used for "public and private baths in this city, watering streets, flushing sewers, generating compressed air for driving machinery, also electric energy for illuminating the streets, etc. together with the last and most important purpose of extinguishing fires". 4 According to the News Letter, a company was formed and a 50-year franchise was granted by the city for municipal and other purposes.

The municipal record for that year doesn't show a record of this franchise and what happened to Swailes and his invention after 1881 is unknown. Blueprints of the Swailes wave motor still exist.

The Steen Wave-Power and Sutro Cove: 1886

In 1886 the Cliff House Restaurant and the surrounding area at Land's End in San Francisco was owned by an engineer/businessman named Adolph Sutro. Six years earlier he had returned to the City after 20 years in Nevada where he had constructed a three-mile tunnel through the mountains to facilitate the drainage of the silver mines. In the process, he had also fought the most powerful monopoly on the Pacific Coast, the Bank of California. After so many years of fighting, he left Nevada and turned his attention to the development of San Francisco and his new property.

At that time, not far away, Golden Gate Park was being developed between the sand dunes of (what would later become) the Richmond and Sunset Districts. Sutro began to develop the area around the Cliff House as a recreational area for the public too. In 1885 he opened Sutro Heights, the grounds of his home on the bluff above the Cliff House, as a public garden, open to all.

Sutro claims that he began to think about building a mechanical tidal pool in Sutro Cove, formerly Naiad Beach, just below the north end of the Cliff House around 1884 but waited until he was finished with Sutro Heights. Some work was done in the following two years but it wasn't until 1887 that he began his project in earnest.

Around this same time, on a rocky section of beach just north of Sutro Cove, an inventor named E.F. Steen planned to erect a wave-power for pumping water and generating electricity. Sutro granted Steen permission to build a wave power on his property in 1886. A surviving blueprint submitted to Sutro by Mr. Steen shows where it was to be located and the changes to the landscape he wanted to make.

Mr. Steen began building his machine that year and then struggled with it for several more. Steen may have been a European inventor since there are no U.S. patents for wave motors to anyone by that name at that time. Little is known of him now.

In January of 1887, the Steen wave-power was accidentally dynamited when the schooner Parallel ran aground on the rocks near Sutro Cove. The Parallel, packed with 40 tons of dynamite and other flammable materials to be used for railroad construction, had been on its way to Astoria, Oregon. Instead, it exploded spectacularly in an early morning blast that was felt as far away as Sacramento and Vallejo.

Despite his desire to continue his project it seems that the Steen wave-power was not able to overcome the blow dealt to it by the Parallel.

What ultimately happened to Mr. Steen is unknown. His machine was gone by 1891 when a new wave motor was built in the same location. The changes he made to the rocky beach are the only remnants of San Francisco's first full scale wave motor project.

The Aquarium and Adolph Sutro: 1887 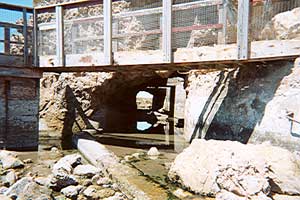 Canal of the Aquarium/Sutro Baths, bored by Adolph Sutro in 1887.

In May of 1887, Adolph Sutro began construction in earnest on his tide-pool project, "The Aquarium". It was intended to be educational attraction for the many visitors who came to the area. The idea was to create a large tidal pool where the wonders of the ocean could be observed safely. For an educational novelty, it was an enormous undertaking. The Aquarium was California's first tidal energy project.

The tide machine was built inside the rocky bluff at Sutro Cove that was then being referred to as "Parallel Point". From a natural shelf 17 feet above mean tide level, a catch-basin was built to catch water from three directions. A canal, 8 feet high and 153 feet long with a downwards slope of 3 feet in a hundred carried the ocean water from the catch-basin to the settling basin on the beach. The settling basin, built of cement and of rock taken from boring the canal, was 80 feet long, 40 feet wide and 10 feet deep. It held 250,000 gallons.

In September of 1887, the Aquarium was given its first public test and proved a great success. Sutro planned to improve upon the Aquarium by building a second basin to adjoin the first and to build a large bathing tank. He also planned to install a water wheel to pump water to a salt water aquarium up at Sutro Heights as well as to power electric lights. The later installments were never added because the Aquarium evolved into a much larger project called the Sutro Baths.