An Admirer Pays His Respects to A Fine Old Lady

By Will Connolly (father of WNP member by the same name)

It is inconceivable that there is one grown person in San Francisco---even an immigrant of the Kaiser-Bechtel persuasion---who hasn't seen Sutro Baths. But there must be thousands of kids who haven't been inside.

They shouldn't grow up without seeing it. Playland-at-the-Beach is all right and a lot of fun but it will be there for a long while. Sutro's is not long for this world. She shuts down next Tuesday, the day after Labor Day, and then they start removing her stays.

The kids should see the Grand Dame in her few remaining hours of Victorian' splendor. She is splendid even now in her erect carriage, though of recent years she has become a careless housekeeper and her cosmetics are crackling and peeling. The kids won't mind that.

The pittance of 25 cents should not separate children from the experience of walking downstairs into the fairy pleasure dome of glass. This late, it isn't important that they swim. Merely that they have the run of the place. They'll never see the like's of Sutro's again in this functional age.

We fervently appeal to grown-ups not only in San Francisco but from miles around to gather up children and escort them to Sutro's over the holiday week end. If it costs you $2 for eight of your own, or a mixed grill of the neighbor's kids, you'll be repaid manifold by their bug-eyed delight.

Yesterday we made a pilgrimage to Sutro's, after reading the distressing news. We are a poor hospital visitor and hate to make duty calls, but felt it was the least we could do toward the Grand Dame in her extremity.

There Are Good Reasons Why She Never Married 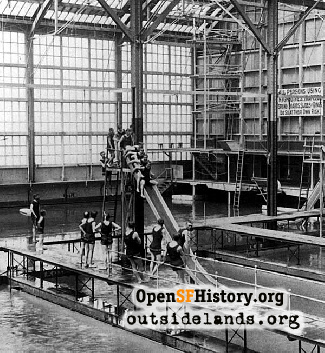 "The Shoot" slide at Sutro Baths depicted in a stereoview. - Library of Congress

It wasn't unpleasant. We have known her since 1917, when she was a blossoming gal of 21 summers. It's a wonder she never married. Now we can understand. She had so many thousands of swains that it would have been unfair on her part to smile on any one.

What's more, a Comstock heiress living in such a fantastic castle surrounded by seven moats was enough to frighten off the most ardent suitor. She had a dowry of $1,000,000 in 1936 but never got around to bestowing it.

She still looks good to us, and she's old enough to be our grandmother.

The warm smell of tanked salt water, the shrill noise of people in swimming, the frigid silence of the walled-off skating rink. The rink was not there originally. That's for Johnny-come-latelys.

Yesterday, as 35 years ago, we enjoyed the wonderful feeling of dizziness; first from looking up at the spider web of steel girders and thin braces; then from looking down on the tiers of galleries lodged precariously on a cliff only a stone's throw from the ocean.

Anyone Can Build a Stadium---But Sutro's...

There must be thousands of seats and thousands of cubicles for bathers, only a few used. The L.A. Coliseum is bigger but you don't get the same sensation of vertigo on the rim. Any conventional contractor can build a stadium. Sutro's required engineering imagination. It's a rookerie on rocks where seagulls have a hard time nesting.

The Grand Dame's perfume of chlorine and eau de saline inspired us to sniff again. Ah! Can't say the same for her taste in bric-a-brac. But then she was of an era when it was fashionable to clutter the living room with horsehair furniture and everything else money could buy.

The things she put in. It must have kept her busy dusting. Any housewife who has a fishing and hunting husband knows how it is. Stuffed trophies are the worst dust gatherers. Sutro's has thousands of them.

The Grande Dame had the usual array of stuffed birds and lacquered fish. But she also had Egyptian mummies and an anaconda 18 feet long, wound around a tree. And apes and bears and bulls from the taxidermist's.

It's hard to keep a tidy house with all that junk around. Climbing those stairs every day with a turkey feather duster was just too much for her. Her brave heart gave out in her 56th year, much too young for a grandmother.

Her manse sure had a unique plumbing system. She didn't have to go out and pump water. There was a catch basin carved in the rock and Pacific waves filled the depression on every tide. In winter, storms used to deliver one million glasses in 20 minutes---much more than she could use under her glass roof.

She entertained some mighty famous swimmers and divers when she was a teen-ager---chaperoned by Adolph Sutro or Dr. Merritt, of course. Good, civic-minded folks.

Duke Kahanamoku, the Hawaiian, made his first appearance on the mainland there about the time of the World's Fair on the Marina in 1915. Fanny Durak and Minna Wylie, first of the great Australian lady swimmers, displayed the radical crawl in the L-shaped tank. At that time Sutro's had the largest tank in the world and the most (7). Fleishhacker Pool hadn't been conceived.

The national championships were held in Sutro's in 1913-14-15 and the fellow in charge was a W.M. Coffman, a sailor on the beach. This is the same Bill Coffman who later headed up the Shrine football game.

George Bond Used to Dive from the Rafters

Ernie Smith, the hey-hey cheerio radio man, swam there for the Olympic Club and so did Bab Small and George Bond and Norman Ross, the Moose, and the Cavill brothers, Tom and Sid.

Bond was principally a diver. He used to ignore the 32-foot platform and take off from the rafters. A bell was clanged whenever Bond felt in the mood to exhibit. Most high-diver demand 14 feet of water, but Bond risked his neck in 7 feet.

Roge Cornell, Otto Schultz and Scott Leary indulged in comedy acts in Sutro's more than a third of a century ago. They would dive off the Seal Rocks and breast the turbulent waves, which could very well kill them if they happened to be caught in a swell. Indoors they made people laugh with a cops-and-robbers routine.

Sutro's was built of steel and glass in the grandiose manner of London's Crystal Palace. The Conservatory or hot house, in Golden Gate Park is another example of the flamboyant architecture of the Nineteenth Century.

On our Grand Dame, so affectionately remembered, it looks good. She would look naked as a skinned cat, and just as uninteresting, if she were trimmed down to modern ranch-house style. What's good about a ranch house?

We'll take the gingerbread. The same advocates of severe lines in a $14,000 shack on a marsh that should sell for $5000 demand frills and frou-frou on their women folk.

We had a crush on the Sutro lady from our grammar school days because she dressed the part. Gaudy, perhaps, but that's what kids go for.

It would be a downright shame if children in your neighborhood were deprived of climbing the terraces of Sutro Baths. When the place closes, a big chunk of San Francisciana goes with it.

(George Whitney, owner of Playland-at-the-Beach, bought Sutro Baths soon after the 1952 closing. The swimming pools were shut down in 1954, but one could still ice skate and browse the curios until Sutro's closed for good in 1966.)