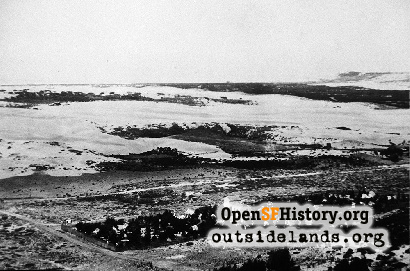 In the late 1800s, many speculators began buying land in the Sunset District. By the early twentieth century, landowners in the area included Michael deYoung, Fernando Nelson, and Adolph Sutro. But one of the largest land owners, Carl Larsen, also had other ties to the district.

Larsen did not live in the Sunset District, but he owned a business and a lot of land in the area. Sometimes called the "Gentle Dane," he donated land for parks in the Sunset and probably would have given more to his city, but underhandedness after his death prevented any further gifts.

Carl Gustave Larsen was born in 1844 in Odense, Denmark. He came to San Francisco in his late 20s and worked as a carpenter. In 1879, he started the Tivoli Café downtown at 18 Eddy Street. In 1905, he moved across the street, constructing his own building at 50 Eddy Street. A popular restaurant, the Tivoli Café was destroyed in the earthquake and fire of 1906. Undaunted, Larsen rebuilt and opened the Tivoli Café and Hotel Larsen.

Plenty of land was available in the Outside Lands in the late 1800s. Larsen's first venture into real estate was in 1888, when he bought one block in the Sunset at an auction. He continued to buy land in the area, and by 1910 he owned fourteen entire city blocks and lots that totaled about nine more blocks. At this time, all of the land was sand dunes. Few of the streets were cut through, and accessibility was difficult.

As time passed, Larsen sold or donated parts of his holdings. Well-known structures that sit on land once owned by Carl Larsen include St. Cecilia's Church on Vicente Street and the (former) Shriner's Hospital on Nineteenth Avenue.

Larsen operated a chicken ranch on one square block bounded by Moraga and Noreiga streets, Sixteenth and Seventeenth avenues. Each morning, a horse-drawn carriage took eggs from the chicken ranch to the Tivoli Café downtown, probably along the only through road in the Sunset, the Central Ocean Road. Tivoli Café ads boasted, "Fresh eggs from Sunset Ranch EVERY DAY."

Once a year, at Easter, the Larsen chicken ranch hosted a large party for the neighborhood, with open bars and tables of food. Some reports say that these annual parties got out of hand and were discontinued in 1913. 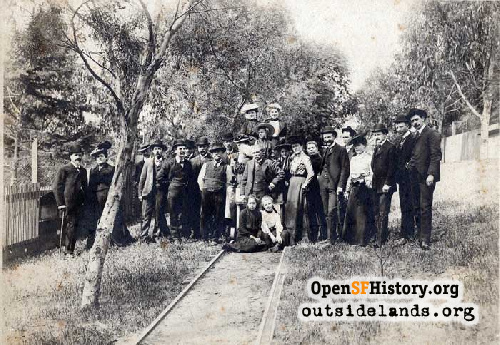 Although he worked for civic improvements and streetcar service to the area, Larsen was not completely happy when his efforts were successful. To help pay for the Twin Peaks Tunnel, a tax assessment was made of Sunset landowners, who would benefit the most from the tunnel's construction. What happened at this point is not clear. According to the San Francisco Chronicle, Larsen owed about $60,000 and filed an unsucessful protest with the city. The newpaper said that to pay his assessment, Larsen sold many of his lots to the city and to private bidders on May 22, 1914. However, Block Books from 1915 and 1920 show Larsen owning most of the same Sunset land he owned in 1910. In More Parkside Pranks and Sunset Stunts, George Stanton wrote that Larsen did not have enough money to pay the tunnel assessment and "died a broken hearted man." However, according to the Chronicle, the Larsen estate was worth close to $800,000 when he died. 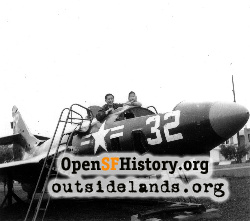 Larsen is best remembered as the donor of Larsen Park, two blocks between Nineteenth and Twentieth avenues, between Ulloa and Wawona streets. Current Sunset residents know the green lawns, baseball diamond, tennis court, basketball court, and Charlie Sava Pool. Sunset residents in the 1950s and 1960s swam in the "modern" Larsen Pool, and remember the military airplanes that sat on the land, one at a time, for years, unique life-sized toys for children to climb over and sit in.

In 1926, when Larsen donated this park to the city, Mayor James ("Sunny Jim") Rolph thanked him on the steps of City Hall proclaiming that Larsen would "be remembered in company with other benefactors, who have accumulated great wealth within our boundaries and were inspired to reciprocate with gifts to the commonwealth."

Larsen Park was unique in that two spaces were set aside as "out-of-door card rooms," one for men and the other for women. The outside card rooms and soccer field are long gone, but the tennis court and baseball diamond remain, now accompanied by a basketball court and an indoor swimming pool.

A memorial to Larsen stands at the Nineteenth Avenue and Ulloa Street corner of Larsen Park. The bronze plaque, mounted on a large stone, displays a bust of Carl Larsen sculpted by Melvin Earl Cummings, who also sculpted Sather Gate at UC Berkeley. Below the sculpture, the plaque reads, "Carl G. Larsen has generously given these two blocks to the city of San Francisco for park pleasure purposes."

Larsen's Death and Disputed Will

Carl Larsen died on November 5, 1928. He was remembered as generous both to the City of San Francisco and to his employees at the Tivoli Café. Newspapers reported that the Tivoli Café had been losing money for years before Larsen's death but that he would not close it or terminate any workers.