Martini: "We were talking about the Cliff House" -- 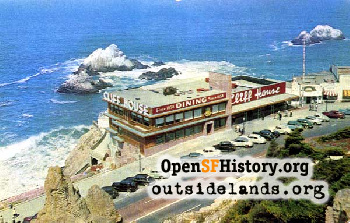 Martini: -- "your dad and how the money went to the Boys Club and all, and we had started to talk about the actual layout of the Cliff House, how it got remodeled.

"And I've also got the names of some of the things that went on in there. Because they were always changing the attractions downstairs. Maybe you could tell me about some of them. There was something called the Country Store downstairs for a while?"

Whitney: "I don't remember that."

Martini: "Yeah. A lot of these are just names on old maps" --

Whitney: "Also, you have to remember that a lot of the drawings are ideas of what might be done" --

Whitney: -- "that don't necessarily mean they were done."

Martini: "I wondered about that."

"But an awful lot of the stuff on drawings, especially that don't have any name -- you know, because Floyd never --pride of ownership in his architect."

"When -- well, Floyd's remodel of the exterior, when they put that façade up, it looked very much like a lot of those houses that were going up out in Westlake at the time" --

Martini: -- "with that sort of redwood exterior and" --

Whitney: "Well, I know my dad figured that the redwood would be California, in particular, so forth, because the bar was redwood. And so he -- and he also thought that redwood would weather."

"And, eventually, had to paint the thing and it looked like hell."

Whitney: "But they -- the redwood was mainly California and tied to the bar."

"That very lowest level of the Cliff House"—

Whitney: "Yeah, where the Musée Mécanique was."

Martini: "Who started the Musée Mécanique, was it Whitney or was it [Ed] Zelinsky?"

Martini: "Your dad did."

Whitney: "Yeah. That was where we ended up putting a lot of the -- there was a lot of the music machines in the gift shop" -- 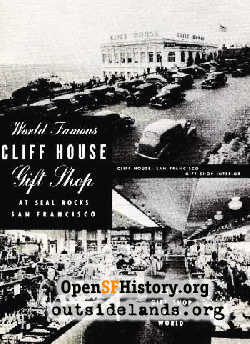 "And we consolidated them into this one main operation. And it was eventually Zelinsky who bought them" --

Whitney: -- "most of them, although we did sell some individually."

Martini: "That was a collection that your dad bought that was already existing, in some ways?"

Whitney: "And then -- like I went skiing one time up in -- oh, what's that -- Alta, in Utah. And down in a little town just north of -- between Ogden and Salt Lake, we went in to get a Coke or sandwich, and there was a big orchestrian going. And I got on the phone and called my old -- my dad and said, 'What's it -- what's one of these things worth?' And then I personally negotiated for it, and it paid for my trip skiing.

"But it was -- that -- that's the way we acquired quite a few. It was not all just -- even like with the bicycles. People would be -- would see the collection and they'd say, oh, then maybe they'd want that one that we've got. So we got an awful lot of singles."

Martini: "And they -- so that ground-floor area, that was -- that was -- Musée Mécanique -- something that Ed Zelinsky still has on display down there, are those giant like -- the Mechanical Farm" --

Whitney: "But those were things that my dad bought singlely, as a result of somebody sending in a photograph and him negotiating, bought the thing and brought it out and put it on display; or it was made to put in the window of -- there was one time a whole Christmas display that came out of the window of the -- whatever Macys was before in San Francisco, way back. One was the city of Paris."

Martini: "Like Santa's Workshop, a little series of vignettes?"

Whitney: "Yeah, those things that they'd put in the window at Christmastime. Well, they -- over the years, they redressed the things and ended up calling it the Swiss Village" --

Martini: "Did your dad commission any of those big, mechanical, elaborate things, constructed purely -- or he picked them up? I see. I see. That makes sense."

Martini: -- "and Ed also has a series of the Toothpick Circus."

Martini: "The Toothpick Circus supposedly was built by convicts" --

Whitney: "Oh, God, no, I don't know the details of that at all, except it was a means of them getting spending money for themselves and so forth.

"And Dad knew -- I don't think he was a close friend of, but he knew the warden out there, Warden Duffy. So things like that. Like my dad got quite a collection from Warden Duffy of zip guns and knives and a whole bunch of crap like that from there, from Warden Duffy. (ferry whistle sounds again)

Martini: "For the tape, that's -- the Friday harbor ferry."

Whitney: "Yeah. You can -- you live here long enough, you could recognize which ferry boat it is, because every horn is a little bit different."

"Your dad also seemed to have picked up a lot of things -- mentioned the little railroad locomotive. He had a cable car. It was supposed to be -- it was labeled the first cable car in San Francisco."

Whitney: "That was on loan from -- from, I think, the cable-car company. One of the, you know, Hyde Street or whatever. But I'm not that certain on that. But that would be the source to begin to find out."

Martini: "And he had a Tucker car."

"There was that car. There was another car that was on exhibit for a while, which was a three-wheeled Davis; one wheel in the back, two in the front, teardrop. And Davis was quite a renowned designer someplace down Southern Cal. And I ended up owning that and had it on display.

"And then we had the steam motorcycle, which eventually got rid of with Ed Zelinsky. I don't know what he ever did with it."

Martini: "He has it in Tiberon."

Martini: "You -- there was an area called the Marine Deck in -- in the Baths that was full of very high-quality ship models and line-ups of telescopes looking out towards the Seal Rocks."

Whitney: "I don't place that.

Martini: "Yeah. It was called the Marine Deck or the Marine View Deck. Is" --

Whitney: "I don't know where it could be. Because as you came down the entry stairs and you split -- the only place to go at that -- that first level was the Sutro museum."

"When you went down the next level" --

Whitney: "The next level."

Whitney: "Yeah, there was another floor; and that's where my dad had the collection of mynah birds."

Whitney: "Yeah, that's right. There was another floor down there. And that's where those stairs come down that we saw in that one photo. That's right."

Whitney: "And that -- that's the floor that you're talking about, with the" --

"Now, I don't remember that at all, other than the damn mynah birds, trying to get those buggers to talk. But he got carried away. He made a trip around the world; and when he was in there, they really pitched them. And so when he got back here, he ended up with about 20 or 30 of these damn things." 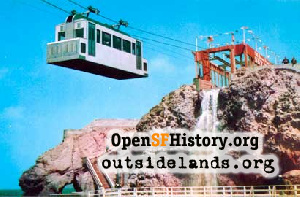 Martini: "What -- it kind of was sort of like a Sky Tram that went to nowhere."

Whitney: "Yeah. My dad thought it would generate traffic out to the far point. And I -- I look at that as his biggest mistake in the entire -- his entire life, because he completely neglected the fact that the capacity or the earning capacity could not be -- would not produce enough to pay for the attendant on there. And, yet, that was the basic thing -- the first question I had, that he then admonished me at Disneyland to study this.

"And the first -- the very first project to increase capacity, which increases earning capacity, was the Adventureland ride. And we accomplished it with the boats. There was one entry into the boat, in the center. I got 'em to put one at the end and one at the other end, and the attendant would, in essence, push the people out of the front. The boarding guy would push 'em in from the back. By the time this group was gone, this one was ready to go; that boat was ready to go."

Whitney: "It's get the capacity up, the earning. The -- the number of passengers per hour, then you relate that to what you charge will give you the potential gross.

"And then if you're -- if you're running it right, you'll be up around 95 percent, even on the busy days. You'll never get a hundred, even with lines."

Martini: "And the Sky Tram was a failure in that regard?"

Whitney: "Sky Tram, there was no way that it could have ever made money."

Whitney: "Because it cost more to run the damn thing over than it could earn. It just couldn't earn enough money. You'd have to charge -- oh, what did it carry; 10, 15, 20 people? You'd have to charge three or four dollars a head. It wasn't that good a ride. It wasn't worth that. Who the hell's going to pay that when they can stand here and look over there, or walk around here and get there?"

Martini: "Was that a preexisting ride, an off-the-shelf?"

Martini: "Was it specially made?"

Martini: "It was on the plans."

"Yeah. That -- that's funny. Because I lived to see the day when I chided him about that openly. Because his advice to me really paid off, because that was one of the ways in -- that I've developed all of the serpentine lines at Disneyland; how to handle 'em fast; how to reduce them during off times and so forth. But all of those things came out of this capacity study.

"And I mentioned what I had in mind to Walt, and Walt caught it like that (snaps his fingers) and turned me loose. And -- you know, they -- it -- I forget how many boats we had on that Adventureland ride, but we spent quite a bit of money redoing all of the canopies in order to do the on and off.

"But that was the kind of confidence that he had in me from the fact that I -- I was this practical amusement-park person, saw those things."

Martini: "It almost kind of harkens back to moving them out of -- you've given the add-on, the bonus ticket, to get people to" --