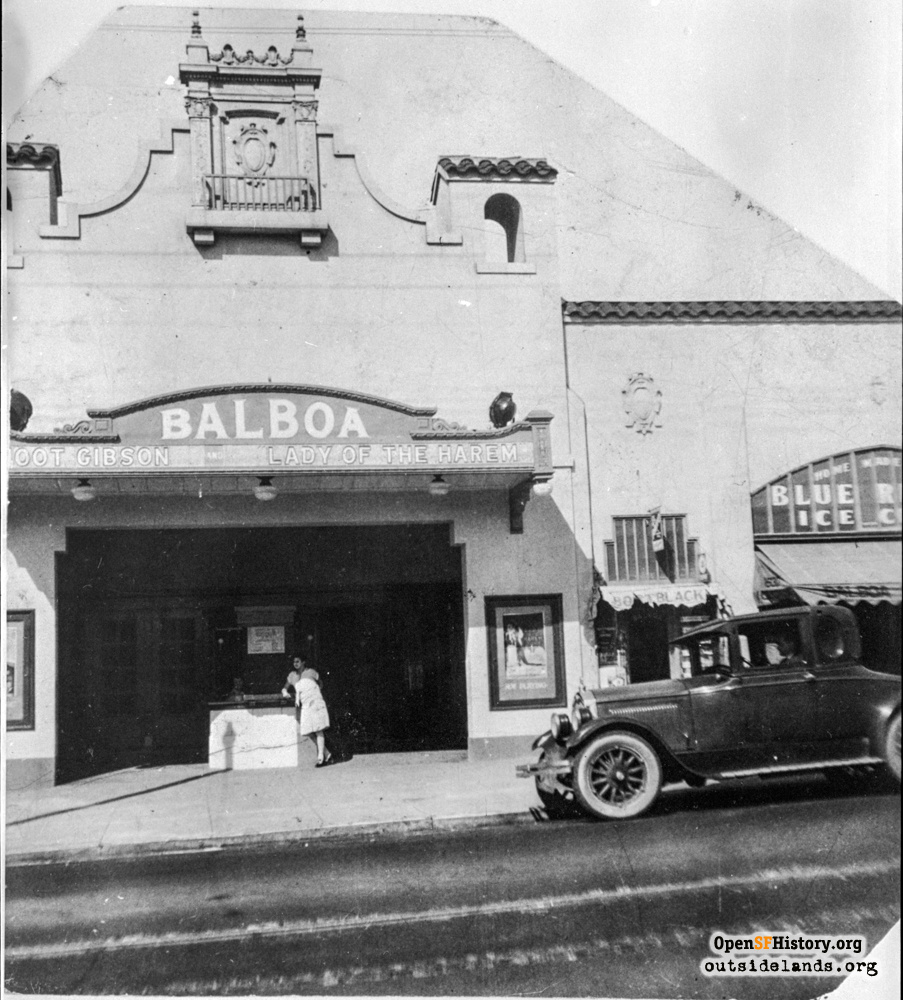 The Original Balboa Theater, the Westwood

The Original Balboa Theater: the Westwood

By Woody LaBounty
(Originally appeared in the Ingleside Light, November/December 2011.)

While the monumental El Rey Theater building deserved a celebration for the 80th anniversary of its opening on November 14, 1931, it was not the first theater in the neighborhood. A few blocks east on Ocean Avenue stood a humbler cinema, one that never received much respect from its creator—after opening the pioneer movie house of the area he first gave its name away, then lured off its audience with a grander creation. 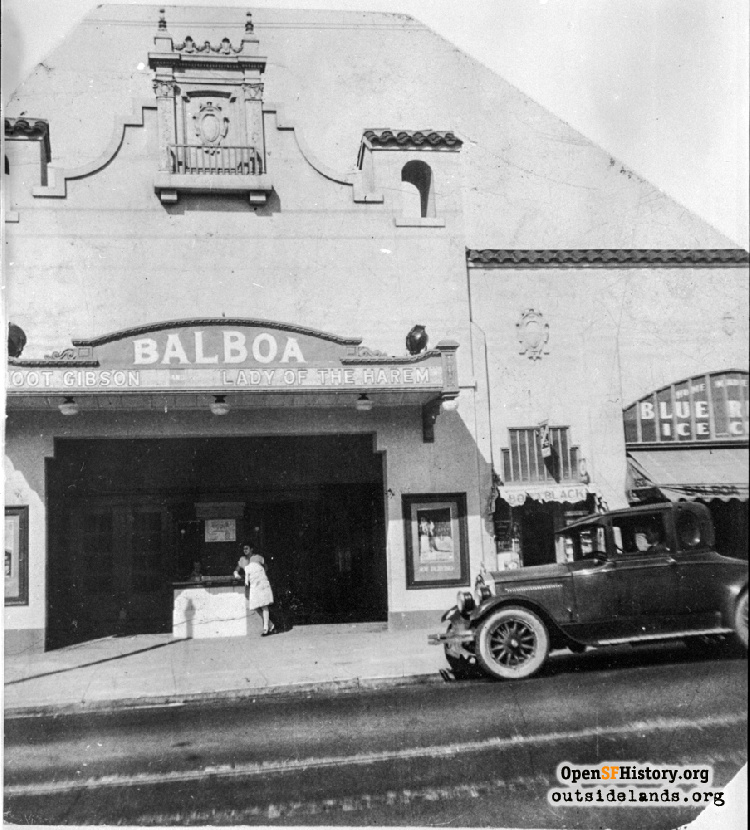 In the early 1920s, San Francisco theater operator Samuel H. Levin was riding high with the motion picture industry. Movies had risen from a nickelodeon novelty to become one of the nation's primary sources of casual entertainment. New motion picture studios, just then forming in Southern California, would end up averaging 800 film releases a year by the end of the decade. Initially opening at larger theaters on Market Street, most movies moved on to second and third runs at cozier neighborhood theaters. A Russian immigrant, Samuel Levin had run a shooting gallery arcade business in the early 1900s before finding success building and operating these outlying neighborhood venues. By 1922, he already had the Haight, the Coliseum in the Richmond District, and the Elite on Sacramento Street (now the Vogue). Seeing a new market in the growing Westwood Park and Ingleside neighborhoods, Levin announced the building of a new theater at 1634 Ocean Avenue on the northeast corner of Faxon Avenue. The "Balboa" would open its doors on Saturday, December 23, 1922.

Levin's architects were brothers James and Merritt Reid, who would end up designing the majority of San Francisco's neighborhood theaters. At the time, many of the new commercial buildings along Ocean Avenue were being designed in popular Spanish-Colonial and Mission Revival styles, and while the Reid Brothers laid out a typical L-shaped plan for the Balboa, they gave it a façade of stucco with a decorated stepped parapet that called to mind Mission bell towers from California's colonial past. A humble arched marquee hung over the entry with a center ticket booth. Small storefronts with transoms ran from the theater entry west to the corner. The San Francisco Chronicle identified the style as "of the rambling Spanish type," and noted that it was decorated in "cheerful tints." Probably in recognition of the often-foggy climate, Levin and the Reid Brothers installed a large open fireplace in the lobby.

Levin played up the fireplace and advertised the Balboa as "An Ideal Home Theater," promising to serve "the great residential districts West of Twin Peaks with entertainment appropriate for the entire family." Levin seemed particularly concerned about the appearance of propriety for the "home-loving people" of the area, and was careful to use the word "wholesome" in all statements and advertisements. This may have been in reaction to the Roscoe "Fatty" Arbuckle trials, the last of which had ended just in April of that year. Arbuckle, one of Hollywood's best-loved comedians, was charged with manslaughter after a woman he caroused with died in his San Francisco hotel room. Newspapers played up alleged Hollywood orgies and debauchery, and the whole movie business was trying to shake off a bad reputation.

No formal dedication of the theater was made on its opening night. The doors opened at 7:00 p.m. and after a Christie comedy short ("That Son of a Sheik"), a Pathe newsreel, and a Tony Sarg cartoon, the first main feature at the Balboa Theater had Charles Ray starring in "A Tailor-Made Man." He didn't stay long. Programs were rotated through neighborhood theaters frequently, up to four times a week. Two days later, Lionel Barrymore replaced Ray on the screen in "The Face in the Fog."

The Chronicle reported "very great crowds" the first weekend, but Levin and his family quickly moved on, planning new and larger movie houses. The very-large Alexandria opened months later. The Harding followed in April 1926, but just before, on February 7, 1926, Levin opened a movie house on outer Balboa Street with a familiar-sounding name. In an ineffective attempt to differentiate the new movie house with the Ocean Avenue venue, Levin called it the "New Balboa Theater." The confusion of two Levin-run Balboa Theaters five miles apart ended when the original cinema on Ocean Avenue finally got a name change to the Westwood. 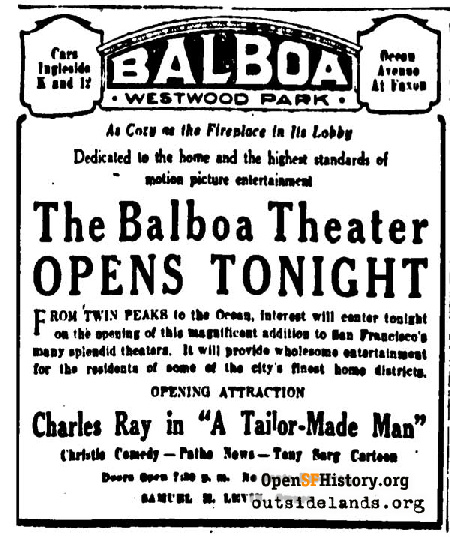 In 1931, Levin began planning for the giant El Rey Theater. In nine short years, the district and movies had leaped forward. The trees of Sutro's forest had been thinned for new homes in Westwood Highlands and Monterey Heights and the potential movie-going public had grown immensely in the West of Twin Peaks area. Along with the increased audience came increased expectations for the film experience. Five years after the opening of the first Balboa theater, Al Jolsen's "The Jazz Singer," the first major picture with synchronized dialogue, signaled the end of the silent picture era. The era of the gilded movie palace had been introduced. Audiences expected bigger and better, while all the Westwood née Balboa had to offer was a cozy fireplace in the lobby.

Levin was a businessman determined to give the public what it wanted. The El Rey was grand, sleek, an exemplar of neon-light alchemy, moderne architecture, arena seating, and stylish interior design. The Westwood up the street, with its small size and sparse Spanish trimmings, seemed quaint and antiquated just nine years after its opening. The Westwood was a PalmPilot, the El Rey an iPhone 4s.

The Westwood and its cozy fireplace closed in 1932. The building was demolished for a grocery store and a Walgreens stands on the site today.

Contribute your own stories about western San Francisco.