Yes, there were grizzly bears in Golden Gate Park, near the Children's Playground. 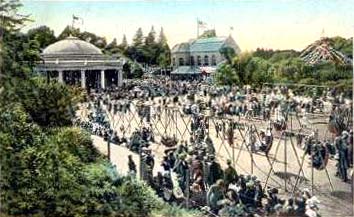 (Originally published in the Richmond Review and Sunset Beacon, January 2002)

Yes, there were grizzly bears in Golden Gate Park, near the Children's Playground.

Far from the benign setting of swings and sand boxes, the bears roamed gloomily in a sunken, almost underground, alleyway near smelly, dank dens where the bears lived.

Before they were removed from the park, the giants of the wild were confined in this cavernous layout as people peered down on the bears from above, standing on strong iron bars.

The playground at that time contained a wonderful corkscrew metal slide. It had nice architectural touches, including stairs that looked like fancy furnace floor vents. Sometimes on hot, sunny days the slide would get very hot, but that was never a problem---the trip down was always swift.

There were also elephants in the park. Children could ride in a seat on the elephant's back along a designated path: two rides for a nickel. I never found out where the elephants went at night or where they came from (retired from a circus?), but it was an exotic ride that for a few moments transported us to India, where we felt important and powerful.

One of my fondest memories of the Children's Playground was getting into a scooter that would go down a concrete path from the top of a nearby hill to the bottom. An eager young man always started our journey at the top when we were securely seated in the Kiddie Car. When riding in the cars, the "clickity clack" of the wheels could be heard as we sped along. It was marvelous.

The nearby merry-go-round was a whole other scene, with its mirrored panels and glockenspiel sounds coming from a loud music box. At the end of a ride, there would be a rush of kids coming to grab their favorite animals for the next ride.

Sometimes we barely had three seconds to get off the animal before someone else was trying to get on. For many children, a dream ride was on the line.

Everyone had their favorite rides on the carousel---the giraffes were wonderfully high but didn't move and the chariots where mothers sat with their toddlers were a choice of last resort.

The swings at the old playground were different than today, with the seats of the swings being made of heavy wooden rectangles that gave many a youth a bloody nose for standing too close. Other features at the park included steel ladders that were mounted horizontally so we could swing on them rung-to-rung.

That was a long time ago, but I still have many fond, poignant memories.