Patti Poole was six years old at the time, and stayed home from school while her parents talked to reporters and defended the people of Ingleside Terraces. 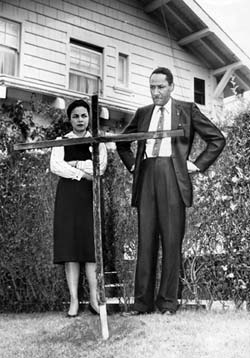 "My favorite thing to do was to try to beat my dad to the garage. I think he would go outside along the street, and I'd cut through the backyard, and I'd always beat him. [...] And I did that one day and ran smack into a burnt cross." 1 --- Patti Poole

Patti Poole was six years old at the time, and stayed home from school while her parents talked to reporters and defended the people of Ingleside Terraces.

"I know this much---I'm sure none of my neighbors would do this sort of thing," said Cecil Poole, and his wife Charlotte put in "Our children have made some wonderful friends in the neighborhood. That has been the important thing to us." 2

The Pooles' home at 90 Cedro Avenue was originally built and lived in by Joseph Leonard, the developer of Ingleside Terraces and the man responsible for its housing covenants, restrictions that made sure homes were properly kept up, that chicken-pens were kept out, and that any non-white person was disallowed from moving in. No realtor would help Poole find a house in the area, and he bought directly from the previous owner.

The incident received a lot of press. The issues of the Civil Rights Movement in the South were now getting some play in San Francisco, and what could be more dramatic than a burned cross? Just the year before, baseball star Willie Mays had similar problems buying a home West of Twin Peaks.

Cecil Poole, a man who had received his share of unwarranted discrimination in his life, showed concern but also remarkable good grace in his remarks to reporters. He explained the presence of the cross to his daughter by saying "Some Christian has lost his way." 5

A few days later some teenagers confessed to the act, and the reporter called it "no more than a youthful, mistaken idea of a joke." Reading through similar incidents in San Francisco at the time, misguided teens are always fingered as the culprits. The first articles are full of headlines such as "Racial Hatred in S.F." and the follow-up pieces are almost a sigh of relief: "youthful prank". 6

Pranks or no, the actions of these teens reflected the genuine animosity of many locals at the time, and one has to admire the courage of those who made the move into neighborhoods where they weren't universally well-accepted. The Poole family came and they stayed, welcomed by most of their neighbors. As for those who didn't want them there, Patti Poole had the answer: "I didn't think so much anymore about the people that didn't want me in the neighborhood, because I was there. That was it. That was too bad. Too bad, so sad, I'm there, I'm not going anywhere." 7

And the Pooles were good for the Terraces, and its reputation, helping it shed an "exclusionary" label. It's a wire-walking act to talk about the importance of a cross-burning incident in San Francisco, while not tarring the open-minded, friendly families that lived then and now in Ingleside Terraces. Patti Poole's memories of living in this west San Francisco neighborhood are almost all positive, and Lonnie Lawson tells me how welcomed he was when he bought his Corona street home in the early 1970s. For my part, every time I walk through Ingleside Terraces I pass some dogwalker or an exercising couple out on a stroll. And every time I get a smile and a hello as we pass, belying the cliche of big city unfriendliness.

So why remember one disagreeable prank perpetrated by some boys fifty years ago?

From the 1950s to today, Ingleside Terraces has had its historians, eager to document its past as a racetrack, its quirky Giant Sundial, and its role as one of the early and most successfully executed "residential parks". These histories are terrifically researched, and a justifiable pride in the neighborhood shines throughout each page, but not one of them remark on Ingleside Terraces' racial restrictions. So we have to balance our view of the past. 8

After doing so, it's a lot easier to focus on the Terraces' wonderful detached homes, it's winding avenues, and views of the hills all around.