Lying south of Golden Gate Park, and far beyond Stanyan street, lies a vast tract of waste and barren lands, whose topographical arrangement is hourly changing through the shifting of the restless sands, and yet whose favorable position—in the direct line of our westward growth which is as inevitable as fate—renders it a most desirable region for investment and for the founding of lovely and healthful homes.—Baldwin's Real Estate Guide, August 1887 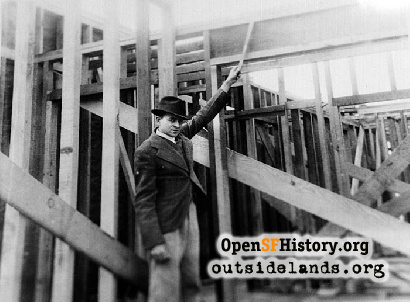 I drive down 41st Avenue, between Kirkham and Lawton Streets in the Outer Sunset District. There are more parking places in this one block than in all of North Beach right now. I stop the car and get out, lean on the trunk, and breathe in the light mist on a quiet, treeless block. When these houses were first sold in the 1930s, each had strips of green grass straddling the driveway. By the time I came around almost all the mimi-lawns had been paved over, and as a boy from the Richmond District, I thought of the Sunset as the strange land that didn't have any trees.

There are no businesses. No one walks by. I am alone with stucco homes on either side of me running off into the distance in razor-straight lines. Each house sits squarely on a 25-by-120-foot lot, and the windows reflect the gray fog bank that sits at the beach ten blocks away. I stand on the edge of Doelger City. 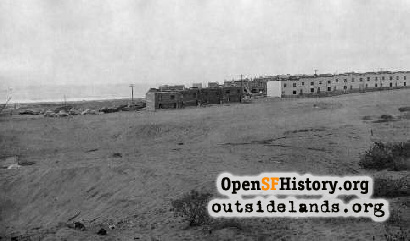 No man had a greater impact on the Sunset District than builder Henry Doelger. Eighty years ago, Doelger ran a hot dog stand on the corner of 7th Avenue and Lincoln Way, and most of the land west of him was empty sand dunes.1 In the mid 1920s, Henry joined his older brother Frank in the real estate business, and began building homes on a line in the dunes that maps identified as 39th Avenue. Frank died relatively young, and Henry became the driving force of the company, adding another brother, John. A romantic newspaperman recounted Henry Doelger's first years as a builder:

"There was only one way to sell homes out in the Sunset District of San Francisco in those days; you hammered a few nails along with the carpenters and when a prospective buyer came along, off came the coveralls, and presto, instant real estate salesman.

"That's what Henry did!"

Although they may have started off sporting coveralls with the common man, the Doelger brothers worked their way into prosperity by building affordable houses on the open sand dunes and scrub south of Golden Gate Park. They competed with the Gellert brothers and the Stoneson brothers, Chris McKeon, and Ray Galli to fill in the western blanks of the city grid. From 1934 to 1941, the Doelgers reigned as the largest homebuilders in the country, tossing up two wood-framed stucco houses a day.

Doelger weathered the Great Depression with help from Bank of America, which loaned his the company over $75,000,000. By the late 1930s, the newly-created Federal Housing Administration made home purchases realistic for middle-income buyers, and the sand that blanketed the western half of the peninsula for a thousand years quickly disappeared under concrete streets, stucco homes, and big automobiles.

Suburbia in the City

Many scoff at these "Avenue" houses as precursors of conformist suburban architecture that prevailed in the years following World War II. People call them "ticky-tacky." One local architecture guide postulated that Sunset District houses were "made with a set of giant cookie cutters."

But the houses stand in good repair sixty years after their construction. Doelger used redwood framing and—as opposed to many large-scale developers—made sure his product was well-built. There is some visual interest as well. Even with assembly-line standardization, the majority of Sunset row houses sport subtle, if sometimes cartoonish, style elements. A curlicue of French Provincial, a cornice of Spanish Colonial tile, and an angled Streamline Moderne lintel can be present in three adjoining stucco houses—an architectural metaphor for the American melting pot.

Doelger and his brothers constructed homes in the Richmond District, Golden Gate Heights, and along MacArthur Boulevard in Oakland. During World War II, the company created over 3,000 units of defense housing in the East Bay and South San Francisco.

After the war, Henry masterminded the Westlake subdivision in Daly City, where parts still feel like a time machine trip to California circa 1957, a daydream of idealistic suburbia in Technicolor. Westlake became Henry Doelger's masterpiece, but in most people's memory, his legacy is tied to the area roughly bounded by 27th and 39th Avenues and Kirkham and Quintara Streets, what he called in newspaper ads, with bravado, "Doelger City." 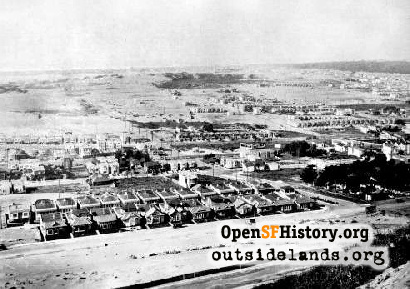 Bibliography: Samuel C. Chandler, Gateway to the Peninsula, Official History of Daly City, CA: David Gebhard, The Guide to Architecture in San Francisco and Northern California;Sally B. Woodbridge and John M. Woodbridge, Architecture, San Francisco, The Guide; Marquis James and Bessie R. James, Biography of a Bank, The Story of Bank of America.

1. In June 2001, Leslie LaManna, the granddaughter of John Doelger, reported in with some corrections, notably about the Doelger hot dog stand: "My grandfather told us the story many times of brewing bathtub gin and homemade beer to sell at a tamale stand they had in Golden Gate Park. Henry invested all the earnings from the stand in land purchased from artichoke farmers, which he was told he was crazy for trying to build on since it was mostly sand." Apparently, Henry became more concerned about his reputation as he grew more successful, and made up the hot dog stand story, which has been repeated in many places.