Urbano Drive is an oval laid exactly along the lines of the old Ingleside Racetrack, the last venue for horse racing in San Francisco.

It starts with Crossover Drive. Whose idea was it to have a mini-freeway slash through the heart of Golden Gate Park? The cypress trees, roses, and rustic pathways are suddenly interrupted by a racetrack for thousands of automobiles. 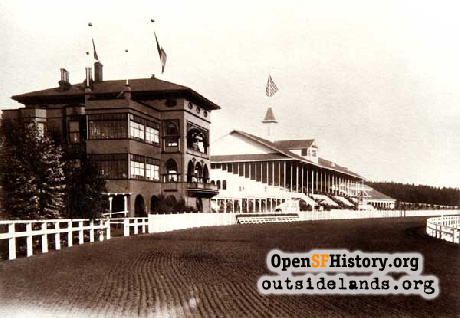 The city that found the money to build tunnels through Twin Peaks and Russian Hill could not come up with the funds to burrow under four blocks of sand to preserve the park.

Bisecting the Sunset District, Nineteenth Avenue gets no better: three miles of traffic, stoplights, pavement, and exhaust fumes. The unfortunate residents park with two wheels on the sidewalk to avoid the common sideswiping.

Drivers try to beat the timed traffic lights, tailgating and speeding so the street resembles the backstretch of the Indianapolis 500. I avoid Nineteenth Avenue like a vegan avoids a Texas barbecue.

If I have to drive south in the Sunset I take the wide, clear avenue called Junipero Serra Boulevard, skirting the large "residence parks" developed in the 1910s and 1920s.

Ingleside Terraces centers on Urbano Drive, a street that has the best reason for curving. Urbano is an oval laid along the lines of the old Ingleside Racetrack, the last venue for horse racing in San Francisco.

The Pacific Coast Jockey Club built on a fifty-year history of horse racing in the city when they opened Ingleside Racetrack in 1895.

The first formal horse race in San Francisco was staged on a meadow flat near Mission Dolores in late 1847. William Leidesdorff, for whom an alleyway downtown is named, owned one of the horses, but history has not recorded whether it won.

In following decades a number of tracks fought for the gamblers and lovers of horseflesh. The Richmond District featured Agricultural Park between the sand dunes of Twenty-third and Twenty-seventh Avenue on Point Lobos Road (now Geary Boulevard). Bay District Race Track ran along what is now Fulton Street from Arguello to Fifth Avenue. The wealthy created a Speed Road in Golden Gate Park to race their thoroughbreds. Near Lake Merced, stood Ocean View Course, and lastly, Ingleside Racetrack opened its doors across the road from a popular inn.

At the turn of the century, gamblers whose luck ran cold with the horses could try and change it with the greyhounds. East on today's Ocean Avenue, across Phelan Avenue from City College, a dog track called the Ingleside Coursing Park operated in the early 1900s. 1

The writer Raymond Clary, in his book The Making of Golden Gate Park, told the tale of a wayward greyhound named "Connemara." The dog decided there had to be a better world than chasing rabbits in circles. One day at the end of a race he had won, Connemara crossed the finish line and kept going until he reached Sutro Forest, near Laguna Honda and present-day University of California-San Francisco. There he became the leader of a pack of wild dogs who terrorized cats, chickens, pigs, and even took out a couple of peacocks in Golden Gate Park. The greyhound, worth several thousand dollars, was never recaptured.

Ingleside Racetrack disappeared when San Francisco's growing population moved into the open-gated community of the Terraces. The Twin Peaks tunnel opened up the area as a realistic development opportunity.

The racetrack had its last moment of glory as a temporary hospital after the 1906 earthquake and fire. Those wanting to watch a filly bolt out of a starting gate had to travel down the peninsula or across the bay.

Today, just a few blocks from Urbano, the corner of Nineteenth Avenue and Holloway Avenue is rated as one of the five most dangerous intersections in San Francisco. Cars fly off Highway 280, desperate to save the thirty seconds the red light delays them. The Department of Traffic has installed automatic cameras to entrap red-light runners, and hopefully, slow down the race.

Last week I sat parked in my car on the former racetrack in Ingleside Terraces. After ten minutes I had counted two dog-walkers (no greyhounds), one Buick LeSabre going about fifteen miles an hour, and three children on bikes.

Read more about Ingleside Racetrack on this page and this page.

Notes:
1. Many sources cite the concentric loops of Faxon and Westwood Streets in Westwood Park as the former dog track, but maps show otherwise.