When Behrend Joost's "Sunny Side Land Company" bought the land from Leland Stanford the surrounding area was mostly vegetable fields.

(Where is the Sunnyside? See map in new window!)

In the late 1880s San Franciscan Behrend Joost signed a contract to provide dredging services for a canal-cutting venture in Panama. The attempt failed (a successful Panama Canal wouldn't come until 1914), but Joost got out with a lot of money for his work before the enterprise collapsed.

German-born, Joost had come to San Francisco as a teenager and had been a grocer, hardware salesman and small-scale real estate investor before starting the California Dredging Company. He put his new fortune to work by investing in real estate west of Glen Canyon. Development plans in western San Francisco had to be tied to efficient transportation to and from downtown, so Joost and his co-investors made sure they had both sides covered by starting the city's first interurban electric streetcar line. The "San Francisco and San Mateo Railway" had its grand opening on April 27, 1892 and its route conveniently ran past Joost's major land investment, "Sunnyside". 1

The Sunnyside subdivision abutted Adolph Sutro's vast forest on the west, the city's jail on the south and a ridgeline on the north, beyond which lay the pastoral Glen Park canyon. Despite the comparative wilderness, Joost's company went to great pains to point out that Sunnyside was "NOT in the sand dunes," and was indeed the "creme de la creme of San Francisco subdivisions". 2 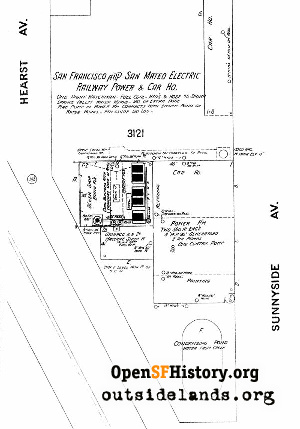 When Joost's "Sunny Side Land Company" bought the land from Leland Stanford the surrounding area was mostly vegetable fields. Surveyed in January 1890, the plat map for Sunnyside was filed with the Recorder's office in April 1891. An alphabetical order to the street names progressed east to west, from Acadia to Hamburg (which sadly was changed to Ridgewood in later years), while the north-south were named for individuals (including Joost himself).

At the corner of today's Monterey Boulevard and Circular Way stood the powerhouse for Joost's electric railway (see image). In July 1891 came the first lot sale and by the end of December thirty-two more had been made. 3

But sales went slowly and the railway, beset by safety and other issues, ended up being a money loser. Joost eventually sold out his interests, and by 1900, less than 5% of Sunnyside's 2,250 lots had been built on. 4

Sunnyside's best know landmark arose in the early 1900s, when W.A. Merralls built San Francisco's "other conservatory" (the one not in Golden Gate Park) just north of today's Monterey Avenue between Baden and Congo. The Sunnyside Conservatory is city landmark #78 and owned by the Recreation and Park Department, but has had plenty of ups and downs through the years. Dedicated neighbors have been working hard to get it restored. 5

The housing shortage created by the 1906 earthquake and fire gave Sunnyside a boost in population and interest. Real estate salesmen predicted that the neighborhood would "within a short time be one of the most densely populated additions of the city." Schools and new streetcar lines, including the "10 Sunnyside", came with the new homes going up. 6

Eventually the city's various building booms caught up to the sparsely settled neighborhood. The razing of Sutro's forest for Westwood Park and Westwood Highlands opened up a path west as "Sunnyside Boulevard" merged into Monterey Boulevard. The old Ingleside Jail became City College and the various vegetable fields faded under concrete and homes. New streetcar lines, including the 10 Sunnyside reached the neighborhood. The small Victorian cottages were joined by stucco homes of the 1920s and 1930s and utilitarian duplexes of the 1950s and 60s.

The Sunnyside still feels like a working-class neighborhood despite acting as a gateway to the tonier enclaves to the west, such St. Francis Wood and Sherwood Forest. Perhaps because of the topography, and the dead-end streets created by City College and Interstate 280, Sunnyside has always had an isolated feeling---next to everything, but not a part of it.

Click on any corner of the map to see a close-up in a new window.

3. San Francisco Recorder's Office, Map Books A and B, p. 140-143. Thanks to Bill Kostura for this information!

4. Data on home-building culled from 1900 Sanborn fire insurance maps. Thanks to San Francisco Genealogy for providing them online!