The story of this mysterious monolith

Unless you live near Ocean Avenue, or read a rare reference about it, there's a good chance you don't know that a big white sundial exists. Because it stands within the original circular configuration of where the Ingleside Race Track operated between 1895-1905, a bogus story took root that the monument was an ornament left over from the track's heyday. Many people believed the story, perhaps visualizing that gamblers should quit while their luck still shines. 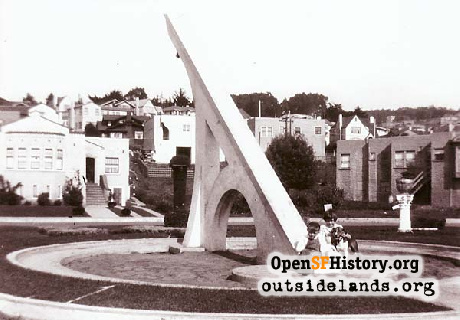 Touted as the world's biggest sundial when it was built, this tranquil monument dominates a quiet cul-de-sac within the Ingleside Terraces residential area, an area of upper income homes created by the Urban Realty Improvement Company in 1912.

The secret: On October 10, 1913, fifteen hundred people attended the opening ceremony for this twenty-eight foot marble and concrete gnomon. It was to become the focal point of its own park and Ingleside Terraces. Oddly, the party for this sun-dependent clock was conducted at night. The timing had various symbolic reasons. That day the Atlantic and Pacific oceans kissed for the first time at the Panama Canal. It celebrated the planned opening of San Francisco's Twin Peaks Tunnel, whose fast, reliable, and clean streetcar line was designed to serve people living away from the downtown area. And it was a romantic setting that would appeal to any young couple considering a new house.

The narrator of the Sun Dial Park ceremony was Joseph A. Leonard, manager of the real estate company. Among the dignitaries present was Supervisor Charles Murdock, and the city's most celebrated engineer, Michael O'Shaughnessy. With the Coast Artillery Band providing the music, grade school children costumed as sylphs unveiled each fixture. Beneath the sundial was a circular reflecting pool fed by a fountain. This had two brass seals and was surrounded by colored lights. A child emerged from the pool and represented the releasing of the water's spirit. Encircling the area is a thirty-four-foot diameter clock face with Roman numerals.

Paths lead away to four huge concrete columns and urns. Decorated with flowers and human figures, they symbolize "the four ages of man and nature's four seasons." A baby in a pram drawn by a stork, with some encouragement from other children, traversed the heart-shaped paths that represent the four points of the compass. Following the children's entertainment, fifty couples joined hands and danced the night away. It was said that the total effect was like being in a fairy land.

Most of the old photographs of the sun dial show children there, and one taken in 1918 shows no houses even constructed in the background. The reflecting pool and its lights were already gone by then; however, a single large light bulb hung just below the tip. As a child I remember in 1958 being dared to reach the top of this edifice, and acted on that prompt by using the safest method possible. I straddled the beam with my hands and knees and shimmied up like a caterpillar (high risk types tend to run up). And I slid back down even quicker, for no matter how enthusiastic my older brother was about how "neat" it was to cling to the top, I knew a fall from that height could be painful. At the time we wondered why the people who live here didn't chase us away, but then many of them knew children have always been associated with this fixture. It draws them like a magnet.

Here are the directions so that you can find Sun Dial Park within the maze of streets that shield it from the world: Drive along Ocean Avenue until you reach Victoria (these streets meet where the Voice of Pentecost Church occupies the old El Rey Theatre). Go only one block along Victoria, turn right on Urbano, turn left on Borica, and right on Entrado.

An edited version of this article originally appeared as part of Hamilton Barrett's "Secrets of San Francisco Monuments" tour for digitalcity.com. It is republished here by courtesy of the author.

View the complete 32-page brochure published by the developers on the "Sundial at Ingleside Terraces."