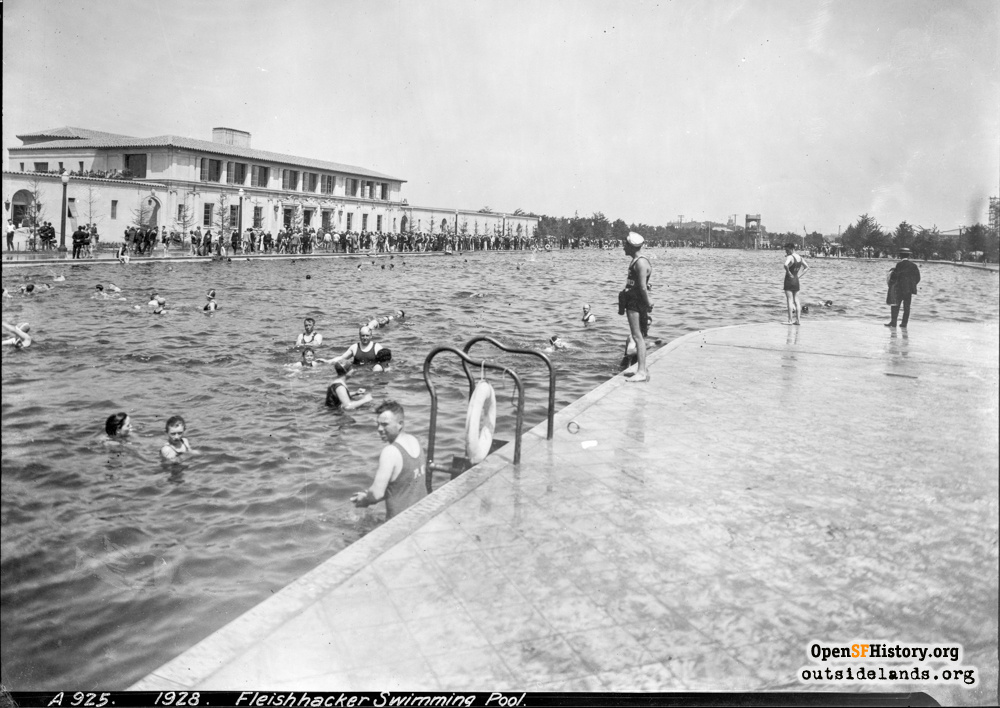 For a city surrounded on three sides by water, swimming has been an on-again, off-again sport in San Francisco over the last hundred years or so.

In 1896, Adolph Sutro opened his sumptuous baths, with seven pools—six filled with ocean water and one with fresh water, heated to varying temperatures, including one “for ladies only”—thus making swimming a popular pastime for San Franciscans. Although Sutro’s existed until its closure and subsequent fire in 1966, the pools themselves were shut down by the San Francisco Board of Health in late 1953 because of maintenance issues, leaving only the museum and the skating rink for the final dozen or so years.

Pumphouse for Olympic Club and Lurline Baths in ruins at Playland, 1972. -

Downtown spots, such as the Lurline Baths at Bush and Sutter Streets (opened two years prior to Sutro’s) and the Olympic Club on Post Street also had lap pools filled with ocean water pumped in from the Pacific Ocean via the Olympic Salt Water pier at Ocean Beach. With a pump house that was later hidden behind the storefronts of Playland, the pier delivered seawater via a cast iron pipe running beneath Geary Street to a settling tank in Laurel Heights (adjacent to the present-day parking lot of Trader Joe’s) where it was gravity-fed to the two downtown facilities. Changing times brought about the closure of the Lurline Baths in 1936, and in 1966, the pier was removed, with the Olympic Club pool converting to fresh water.

Thanks to the generosity of philanthropist and banker Herbert Fleishhacker, a magnificent outdoor public swimming pool was opened adjacent to the new zoo 90 years ago this month, on April 22, 1925. Fleishhacker Pool was 150 feet wide by 1,000 feet long, held 6.5 million gallons of heated seawater, and could comfortably accommodate 10,000 persons at one time—so large that its crew of lifeguards patrolled in rowboats. There was also a two-tiered diving board above a section of the pool that was 14 feet deep. The complex provided countless hours of enjoyment to San Francisco residents, but maintenance issues and declining attendance became obvious concerns by the 1960s. As a result of damage to a drainage pipe from a winter storm in January 1971, the pool was converted to fresh water, but the change resulted in poor water quality and the pool was closed at the end of that year. The adjacent pool house remained, even after the pool itself became a zoo parking lot in 2000, and on December 1, 2012, the derelict building was destroyed by fire, though the ornate portico entrance and some roof tiles are being preserved as a memorial. 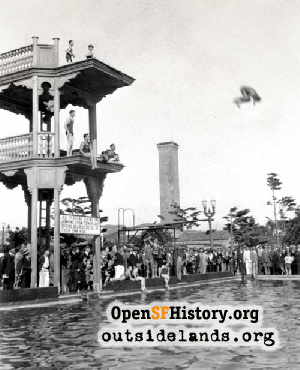 At about the same time as the opening of Fleishhacker Pool—1924 to be exact—the Crystal Plunge (originally named the Crystal Palace Salt Water Baths) was opened at 775 Lombard Street, between Mason and Taylor, by Italian immigrant Edward Cerruti, Jr. It was there that swim coach Charlie Sava (for whom the Larsen Park Pool at 19th Avenue and Wawona Street was re-named decades later) coached San Francisco native and George Washington High School grad Ann Curtis. Curtis set numerous swim records and eventually brought home two gold medals from the 1948 London Olympics when she was 22 years old. She later married, raised a family, and operated a popular swim school in San Rafael. Just like Sutro’s, though, the old Crystal Plunge was popular, but never profitable, and the founder’s widow had the place demolished in 1958 and replaced with apartment buildings.

The Fairmont Hotel installed the Terrace Plunge, a large indoor swimming pool in 1929. At the end of World War II, the pool was closed and the area converted into the Tonga Room, a Polynesian-style lagoon setting which enchanted visitors for decades—including thousands of high school students on prom nights each year.

San Francisco currently has more than 40 lap pools—not counting smaller recreational pools or pools in private buildings. Surprisingly, given the weather of the Outside Lands, many of these pools are located in the western neighborhoods, though several are indoor facilities. One of the Sunset District’s hidden private swimming pools is located on the ground level of a 1960s apartment building at the northwest corner of 30th Avenue and Judah Street, though liability concerns led to its closure decades ago, and it has since been used as a storage room.

The San Francisco Recreation and Parks Department manages nine public swimming pools, three of which are located on the western side of the city:

There are nine community center pools in the city, five of which are located in the western neighborhoods:

There are seven San Francisco educational institutions with pool facilities, most of which are located in the western neighborhoods:

St. Ignatius, true to its Jesuit background, refers to its pool by the proper Latin name, natatorium. UCSF has two additional pools located at their new Mission Bay campus, while USF’s Koret Center is home to San Francisco’s only Olympic-sized pool.

In addition to all of these, there are 10 more lap-style pools located at commercial fitness clubs around the city, including 24 Hour Fitness on Ocean Avenue near Ashton Avenue, and City Sports Club in Stonestown.

So in spite of the loss of Sutro’s and Fleishhacker’s more than 40 years ago, along with the earlier closures of the Lurline Baths, the Fairmont’s Terrace Plunge, and the Crystal Plunge, it is clear that swimming remains a popular recreational activity for many San Franciscans even today.