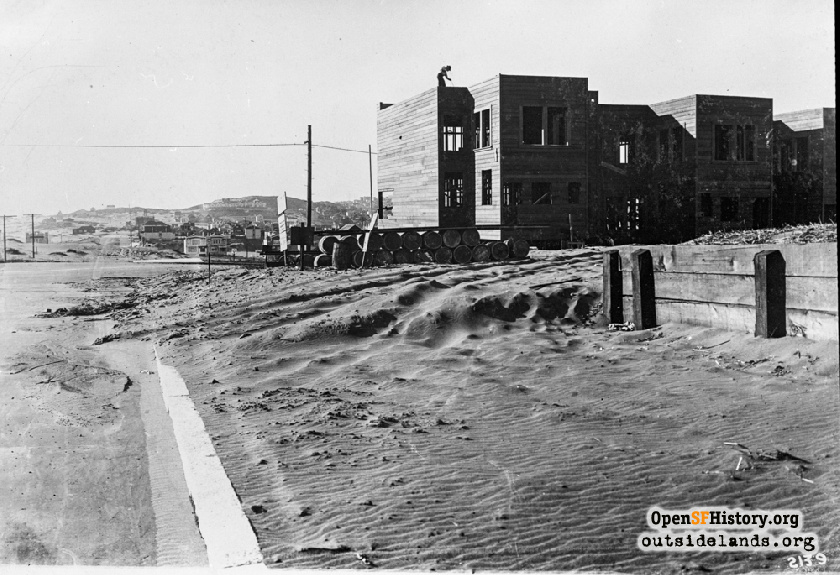 The Outside Lands were developed over a long period of time. Frank Dunnigan takes us through a tour of some of these developments.

Frank Dunnigan, WNP member and columnist. -
When walking or driving through the Western Neighborhoods, it’s often hard to imagine that prior to World War II, many sections of the area had not yet been built. For many of us born after that time, the only significant local housing construction seen first-hand has been at the former Playland site along the Great Highway (roughly 40-50 years ago) or the occasional in-fill project at a rare vacant lot.
This month, we take a look back through the vast photo archives of WNP and OSFH with some examples of how and when many parts of the Western Neighborhoods were buzzing with new construction. 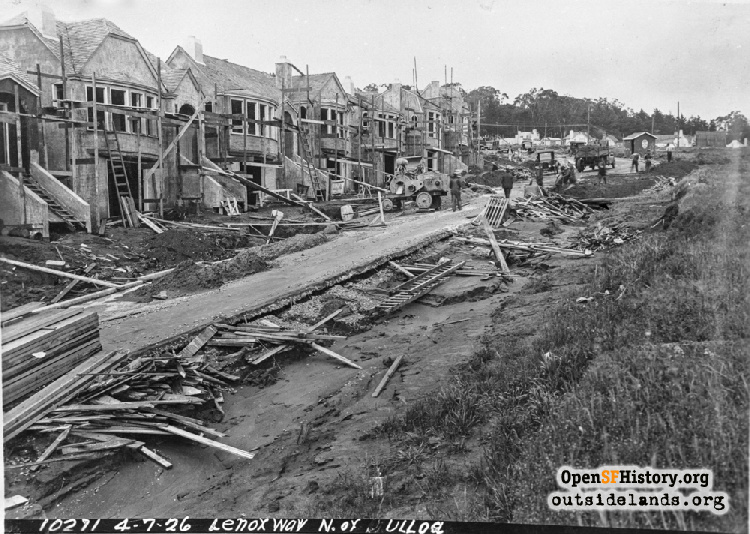 Home construction and street grading on Lenox near Ulloa, August 7, 1926 - DPW Horace Chaffee, photographer - SF Department of Public Works / Courtesy of a Private Collector.
Streetcars began rolling though the Twin Peaks Tunnel in February of 1918, thus opening up the West Portal neighborhood to development, though World War I was a factor that limited the availability of both labor and materials for construction. By the 1920s, however, work was progressing rapidly, including on these new homes on Lenox Way, just up the hill from the future library site at Ulloa Street. 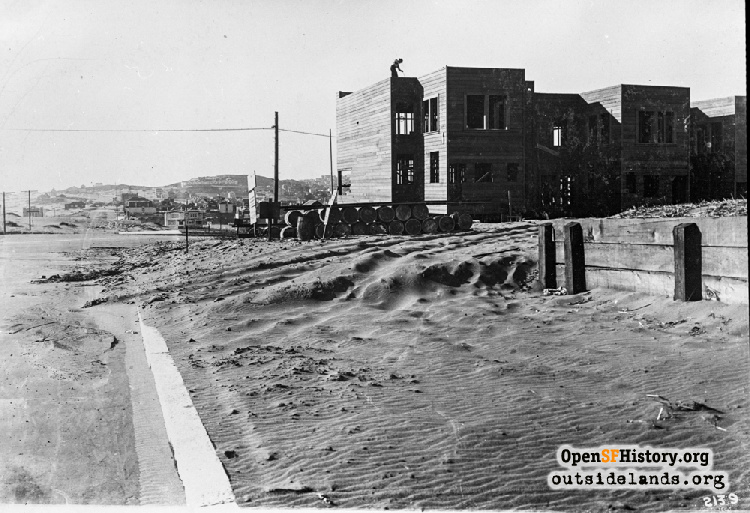 Construction of 16th Avenue homes near Balboa, December 22, 1914 - DPW Horace Chaffee, photographer - SF Department of Public Works / Courtesy of a Private Collector.
There were already a substantial number of homes in the Richmond District by the time of the 1906 Earthquake & Fire of 1906, and during the City’s recovery, construction accelerated quickly in the area, continuing over the next several decades. Shown here are new homes being built near 16th Avenue & Balboa Street—near the site that is now home to WNP’s present-day offices—in 1914. 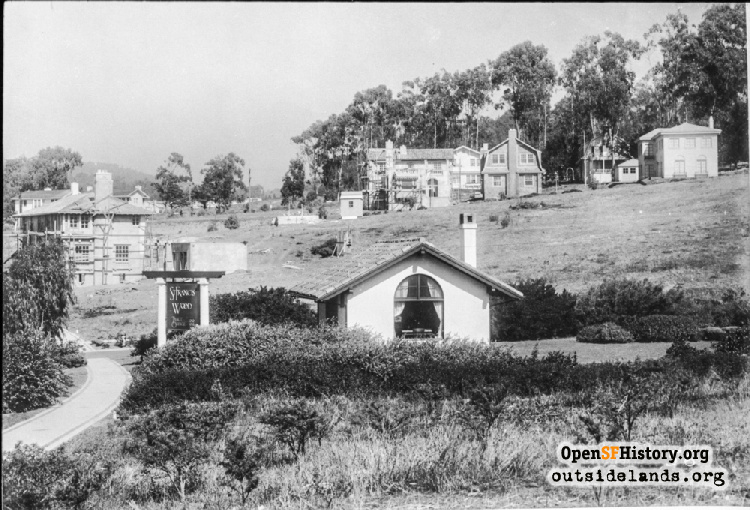 View past St. Francis Wood clubhouse and tract office toward house at 65 Santa Clara Avenue under construction, circa 1920 - Courtesy of a Private Collector.
The development of St. Francis Wood began in 1912 and was delayed by World War I, though by 1925, some 500 homes had been built and occupied prior to the onset of the Great Depression. The corner of Santa Clara Way near San Anselmo Way is shown here in 1920. 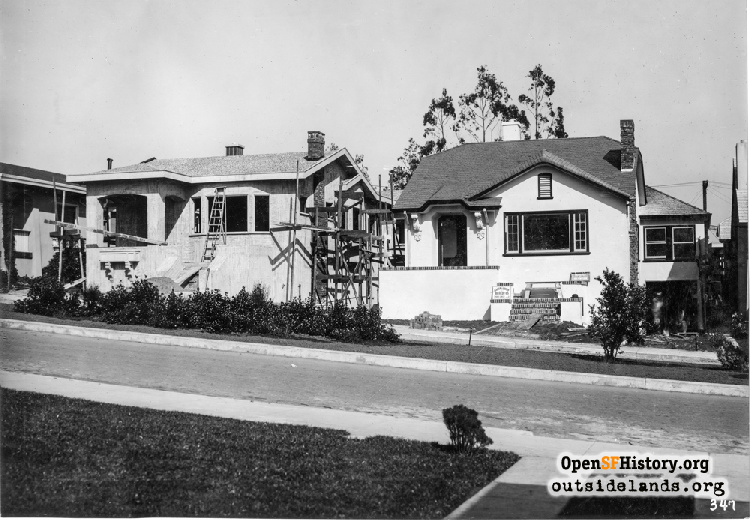 Houses under construction under Miramar near Wildwood, 1920 - Moulin, photographer - Westwood Park Album / Courtesy of a Private Collector.
Westwood Park was developed beginning in 1916-17, just as many of the larger homes in the nearby Ingleside Terraces neighborhood were nearing build-out. The area was distinctive for the arts-and-crafts style of the homes. 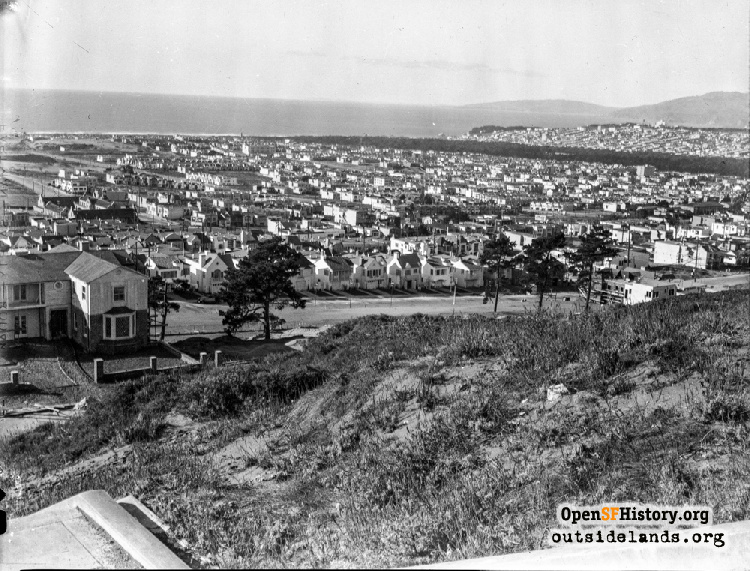 View northwest from top of Mandalay Steps at 14th Avenue, Henry Doelger's home at left - Courtesy of a Private Collector.
Henry Doelger began building in the Sunset District in the 1920s, and by the late 1930s, much of the neighborhood was filled with homes constructed by his company and also by other builders. The personal home of the Doelger family at 15th Avenue and Noriega Street is shown at far left. Many more homes would soon fill the adjacent Golden Gate Heights. 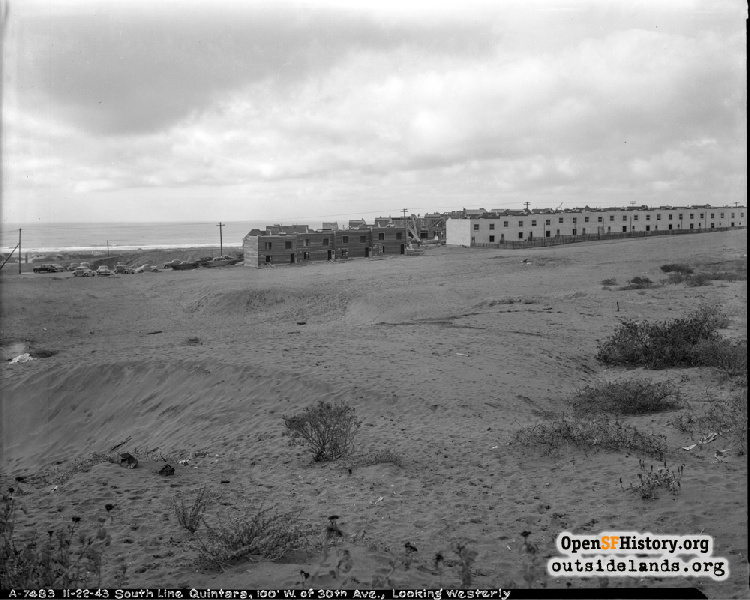 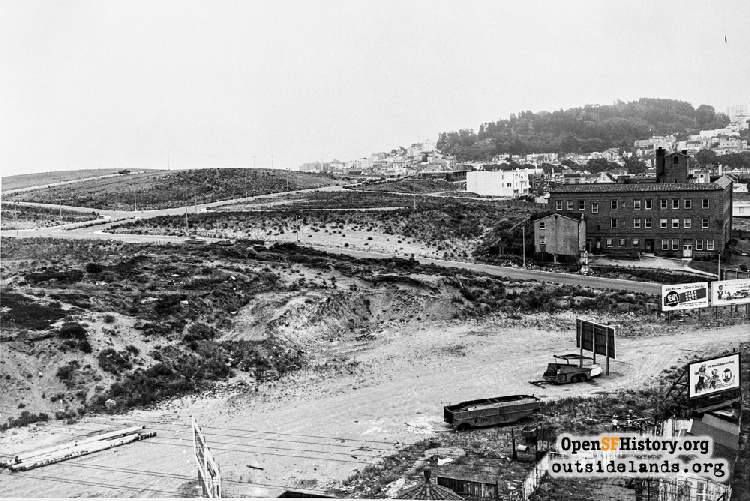 Old Calvary Cemetery site near Geary and Masonic recently cleared for Anza Vista development, circa 1950 - Bill Kostura Collection / Courtesy of a Private Collector.
Calvary Cemetery stretched out to the Northeast from the corner of Geary and Masonic (lower right) from the 1860s until after World War II, though the final burial was recorded in 1916. The City & County of San Francisco approved the closure of the old cemetery grounds, and removal of bodies began in 1938, with the project finally reaching completion in the late 1940s. Here, new streets have been graded for the Anza Vista neighborhood at upper left in 1950. A giant Sears store (now City Center shopping complex), soon occupied the site at lower left, and the front wall of the red-brick structure of St. Elizabeth’s Infant Hospital at right still faces Masonic Avenue. 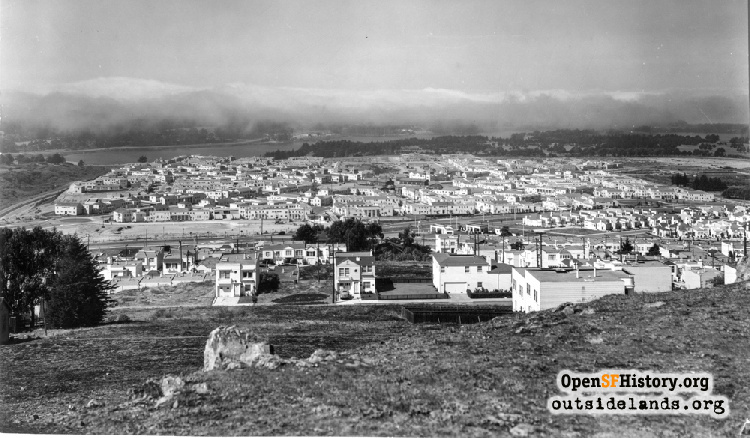 View over Park Merced from Merced Heights, 1944 - Moulin, photographer / Courtesy of a Private Collector.
The low-rise units of Parkmerced (shown in the distance) were built by Metropolitan Life Insurance Company in the years before World War II, and eleven 13-story towers, with 156 apartments each, were added to the community in the early 1950s. In 2006, San Francisco State University acquired most of the low-rise units adjacent to Holloway Avenue opposite the Library, and converted them to student housing known as University Park-South (some of which were demolished and replaced by the new 9-story Manzanita Square student housing building opened in 2020). In 2011, Parkmerced’s new owners received City approval on a multi-decade renovation plan that will replace all the low-rise units with new mid- and high-rise units while maintaining the 1950s-era towers. This plan, upheld through court challenges, is underway, and will continue through the year 2040. While there was some home development in Merced Heights (foreground) before World War II, most of the construction there occurred in the years after the War, circa 1945-1960. 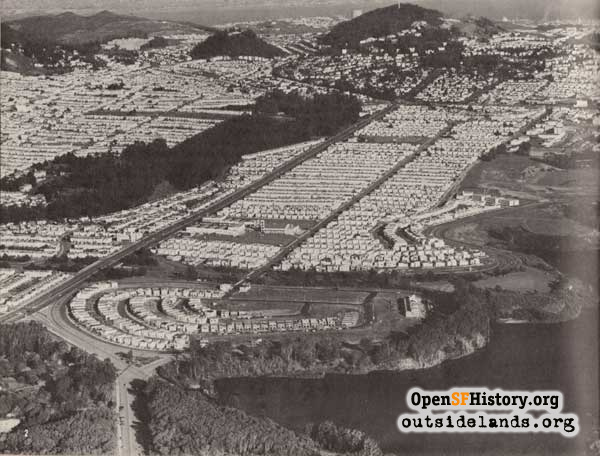 Aerial view of Lakeshore and Country Club Acres developments nextto Lake Merced, 1950 - Courtesy of the Prelinger Library.
Lakeshore and Country Club Acres (middle and right) were post-World War II housing developments built by the Gellert Brothers near Lake Merced circa 1950. These areas extended from the edge of the earlier Merced Manor development at 26th Avenue all the way west to the grounds of the San Francisco Zoo. 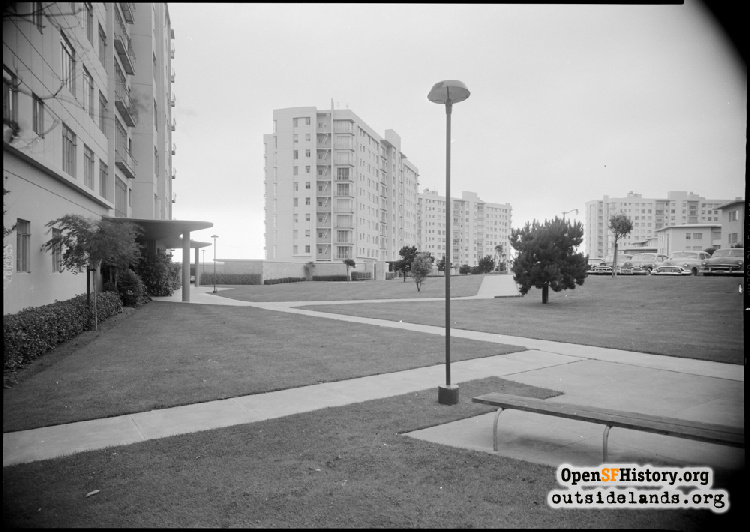 View north of Stonestown Apartments, 1950s - Morton-Waters Co. image - SCRAP Negative Collection / Courtesy of SCRAP.
The construction of Stonestown in the early 1950s included 4 apartment towers of 90 units each, plus several hundred more low-rise apartments in nearby garden-unit buildings. The entire residential portion of Stonestown was sold to San Francisco State University in 2006 and has since been used as student housing and known as University Park-North. 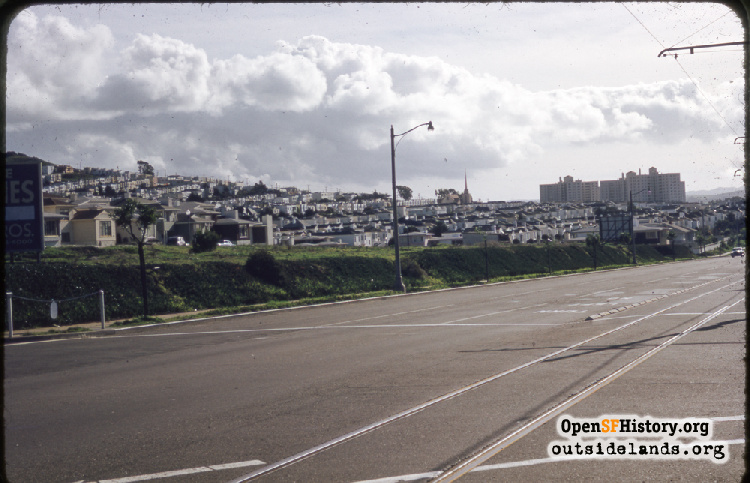 View south to Park Merced towers, 1953 - Courtesy of a Private Collector.
Many of the homes in the Lakeside neighborhood were built in the years before World War II, but this portion of the area at 19th Avenue & Winston Drive was still empty in 1953, even after Stonestown had already opened. Additional homes and the Merced Branch of the San Francisco Public Library were constructed along here over the next few years. Some of Parkmerced’s 1950s-era 13-story towers are seen in the distance. 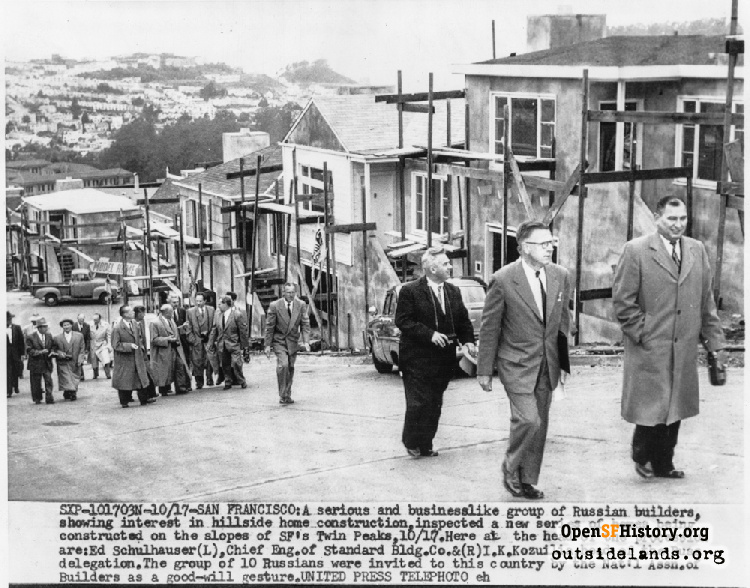 View northwesterly toward Golden Gate Heights, October 17, 1955 - Courtesy of a Private Collector.
By 1955, new detached homes were being built on the curving, freshly carved streets of the Mid-Town Terrace neighborhood. In this photo, Russian builders were showing interest in a new series of homes being constructed on the slopes of Twin Peaks in October 1955. 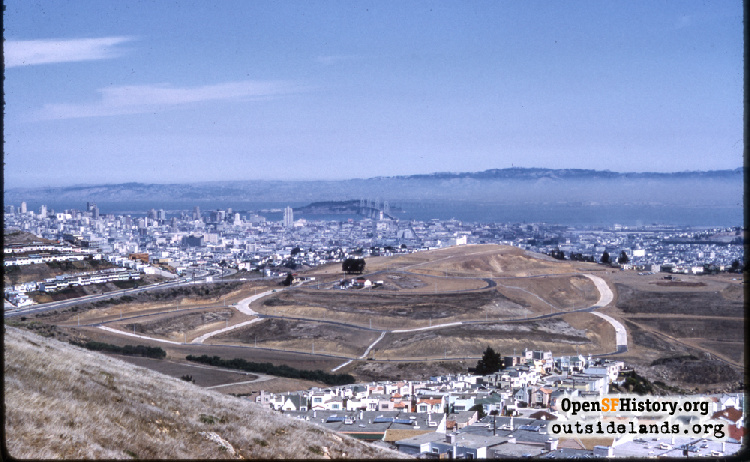 Red Rock Hill, Diamond Heights during development, September 1961 - Courtesy of a Private Collector.
By September of 1961, street layouts were underway in the new Diamond Heights neighborhood, with construction set to begin on an entirely new community of homes, apartments, schools, and shopping. 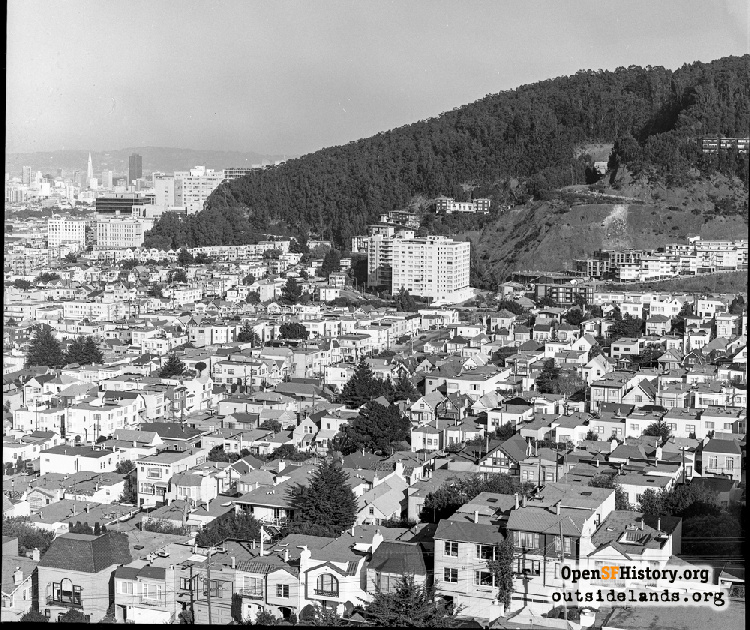 View east to Mt. Sutro and UCSF from Grand View Park, 1974 - © Greg Gaar Photography / Courtesy of a Private Collector.
Sunset Towers, built in 1961 as twin 12-story apartment buildings on Locksley Avenue at the base of Mount Sutro near the University of California Medical Center campus, are now known as Avalon Sunset Towers. They are among the tallest apartment buildings in the Western neighborhoods. 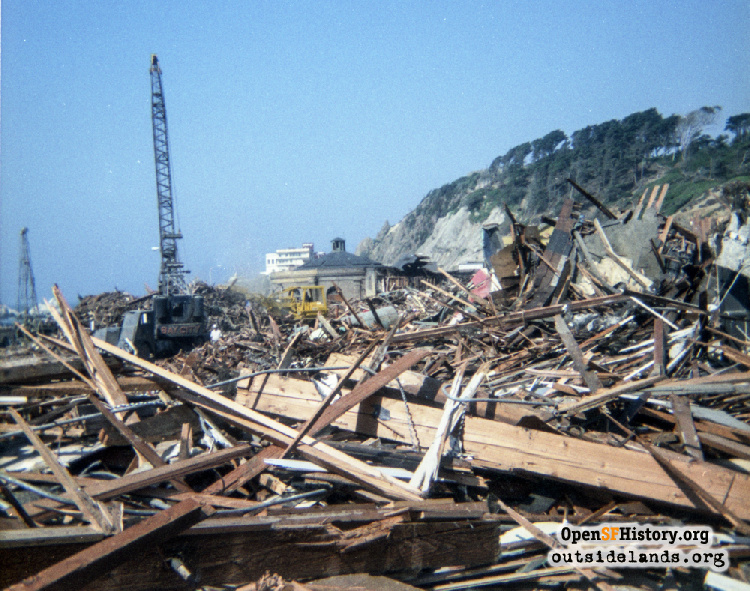 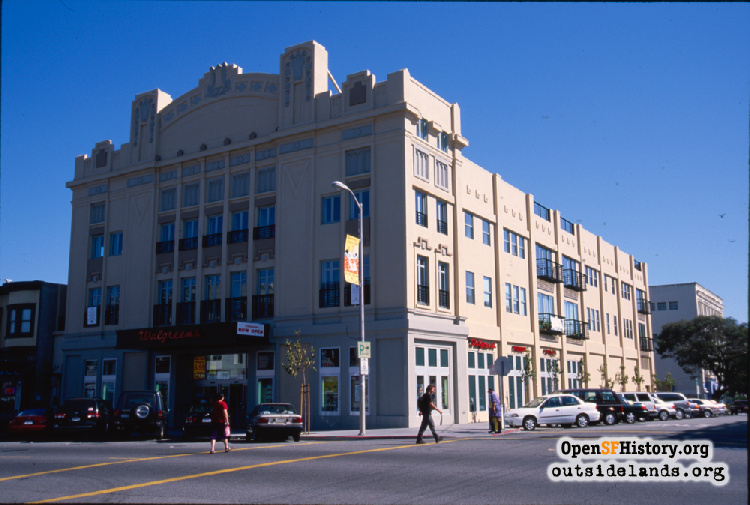 Former Coliseum Theatre converted to condos and a Walgreens on the ground floor, 2002 - Richard Brandi, photographer / Courtesy of Richard Brandi.
Much of today’s construction in the Western Neighborhoods involves either demolition of existing buildings or re-purposing them to new uses such as the conversion of the old Coliseum Theatre to residential housing units with ground-floor retail, a Walgreen's store, as shown here in 2002.