The pandemic has closed many long-time outside lands dining establishments. Frank Dunnigan takes a look at the places that survived.

Frank Dunnigan, WNP member and columnist. -
Recent closures among food and beverage establishments in the Western Neighborhoods occurred because of various different causes—Covid-19, failed lease agreements, and owner retirements. These changes have altered the dining/drinking experience for many local residents.
Some of these recently closed establishments—the Cliff House (after 157 years), Louis’ (73 years), Seal Rock Inn Restaurant (50+ years), West Portal’s Manor Coffee Shop (also 50+ years), Marcello’s on Taraval (47 years), and others have also served to reshuffle the roster of long-time local businesses. Even some national chains like Olive Garden and Chevy’s have vanished from Stonestown after 20+ years each.
So where are the long-time eating/drinking spots still in operation on the West Side of San Francisco? Here is a short list of just some of those “splendid survivors”.
APPEL & DIETRICH MARKET—22ND AVENUE & CALIFORNIA—1950s—This location has operated under many different names. One large vintage sign on the corner of the building reads APPEL & DIETRICH FINE FOODS, while another across the façade says 6001 CALIFORNIA MARKET, while from 1966 until 2007, the sign over the entrance was Super K Market alongside the APPEL & DIETRICH name. It remains popular for variety of to-go deli sandwiches and salads. 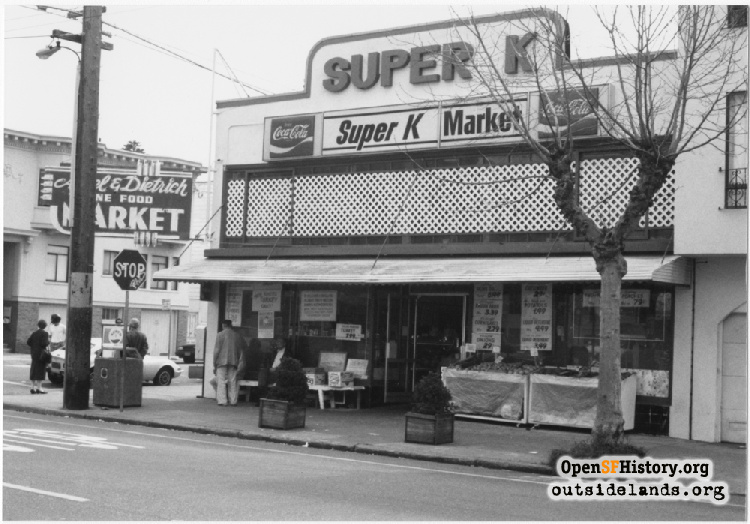 Super K Market at 6001 California St. Neon sign 'Appel & Dietrich Fine Food Market - Richmond Review Newspaper Collection / Courtesy of Paul Kozakiewicz, Richmond Review
ART’S CAFÉ—9TH AVENUE & JUDAH—1973—This neighborhood landmark of the Inner Sunset has been attracting devoted regulars with generous portions of classic comfort food, both American and Korean, at moderate prices since the 1970s. As the pandemic began in the Spring of 2020, owners Sarah and Hae Ryong Youn embarked on an anticipated retirement and Art’s was closed, but by February of 2021, new owners Chol and Young Lee took over the spot, maintaining the previous menu and atmosphere. 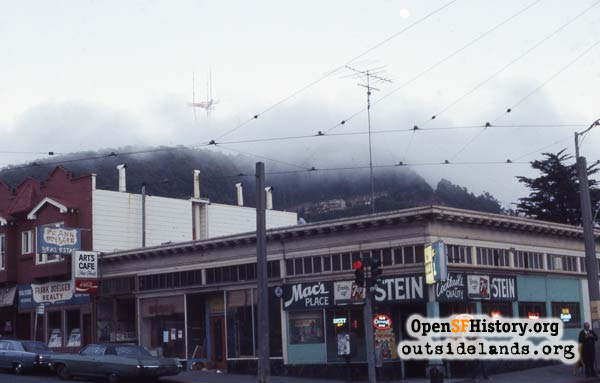 Mac's Place, The Stein, Art's Cafe, and Frank Doelger Realty on the southeast corner of 9th Avenue and Irving Street, circa 1973.
BEEP’S—OCEAN AVENUE—1962—Since the height of the space age in the early 1960s, Beep’s has been dispensing classic hamburgers, shakes, and fries from its location adjacent to City College of San Francisco. One of San Francisco’s early drive-ins, the spot is still marked with an eye-catching neon sign of a rocket ship in flight. 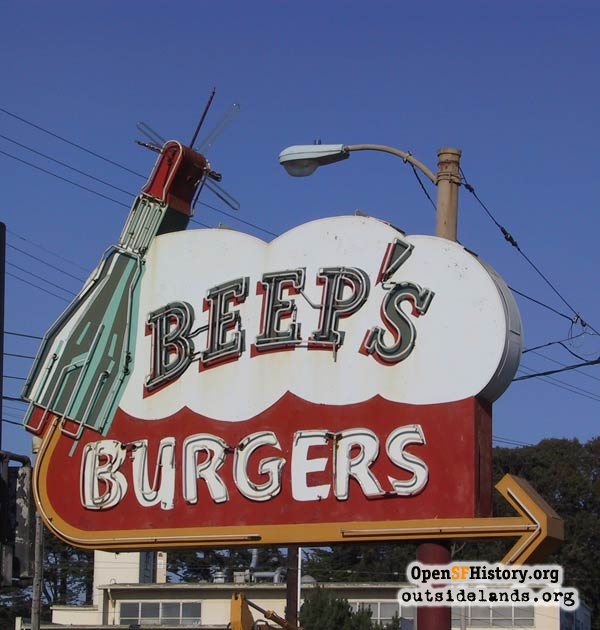 Beep's Burgers sign at Lee and Ocean Avenues, 2002
CELIA’S—45TH AVENUE & JUDAH—1960—This first outpost of a family-owned chain of Mexican restaurants was founded by Celia Lopez and her husband Perfecto in 1960. The Celia’s brand has expanded to multiple locations in San Francisco, Marin, San Mateo, and Contra Costa counties—each one being run by a different family member.
CINDERELLA RUSSIAN BAKERY—436 BALBOA STREET—1953—Operating since the early 1950s, new owners Mike and Marika Fishman purchased the business from the two women who owned and operated it previously. Now updated and with a parklet, the spot offers a variety of bakery, café, and Russian Orthodox holiday food items, as well as catering.
EL TOREADOR—WEST PORTAL AVENUE—1957—With its vibrant Mexican artwork, El Toreador has been a popular neighborhood destination since the 1950s, dispensing lunches and dinners daily in a comfortable atmosphere. The menu includes more than 50 beer varieties from Central and South America.
GUERRA QUALITY MEATS—15TH AVENUE & TARAVAL—1954—The Guerra brothers began operating the meat market in the old 22nd & Taraval Market (long-since converted to a Walgreens) in 1954. Today, the sons of the original two owners are well-established at corner of 15th & Taraval, dispensing meats, specialty groceries, and generously-portioned salads and deli sandwiches.
GOLD MIRROR—18TH AVENUE & TARAVAL—1969—Gold Mirror, once a Fillmore Street bar impacted by urban renewal, moved to the Parkside District in the 1950s and began offering Italian dinners. It has been operated by the DiGrande family since 1969, offering classic Italian lunches and dinners, including a banquet room and a to-go menu.
HONG KONG LOUNGE—17TH AVENUE & GEARY—1980s—Operating since the 1980s, one of the Richmond District’s most popular dim sum locations is open and serving tasty small dishes daily for dine-in and take-out, Thursdays through Tuesdays, on Geary Boulevard near 17th Avenue.
KHAN TOKE THAI HOUSE—24TH AVENUE & GEARY—1976—Serving authentic Thai cuisine since the year of the Bicentennial, Khan Toke operates in the Richmond District 6 days a week, offering dine-in, take-out, and delivery.
LITTLE SHAMROCK—9TH AVENUE & LINCOLN WAY—1893—Opened in 1893 to accommodate workers and visitors to the Midwinter Exposition of 1894 in adjacent Golden Gate Park, the neighborhood watering hole is here to stay—having survived earthquakes, recessions, and pandemics for nearly 130 years. Although there is no formal food service, occasional specials are catered and there is always an abundance of snacks to go along with liquid refreshments. 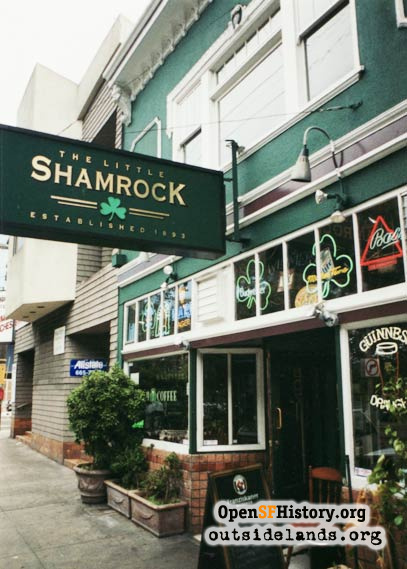 The Little Shamrock bar at 807 Lincoln Way, about 2001.
PACIFIC CAFÉ—34TH AVENUE & GEARY—1974—In a warm and welcoming atmosphere, Pacific Café has been serving comforting seafood fare since July 4, 1974 in a classic Richmond District building that has been there since the neighborhood was still sand dunes. Since opening day, the location has offered free wine while customers wait for a table.
SEA BREEZE CAFÉ—46TH AVENUE & JUDAH—2001—This family-owned eatery celebrates its 20th year in operation near the beach, serving burgers, salads, pasta, and organic foods—“California Fresh with an International Twist”—plus an in-house coffee bar.
SCHUBERT’S BAKERY—6TH AVENUE & CLEMENT—1911—Founded in 1911 on Fillmore Street in the Western Addition, original owner Oswald Schubert expanded the operation to Clement Street in the 1940s. When he retired, another owner took over for most of the 1950s and 1960s, making few changes to the classic German recipes. In 1968, Hilmar and Annie Maier bought bakery and operated it until current owners, Ralph and Lutz Wenzel, purchased the business in 1995.
SHAW’S—WEST PORTAL AVENUE—1931—Once part of a Bay Area chain of 50 ice cream and candy stores, this location was the first for founder Douglas Shaw in 1931. By February of 2020, it was the final shop that remained open, and neighbors were distressed to see the building vacant and with a FOR RENT sign. Local resident Diana Zagoric took over the business and reopened the classic spot by August, 2020, to the delight of West Portal shoppers.
TENNESSEE GRILL—22ND AVENUE & TARAVAL—1952—A long-time hang-out at 22nd Avenue and Taraval Street for students from Lincoln High School, St. Cecilia Church parishioners, and many neighborhood retirees, Tennessee Grill has been dispensing breakfast, lunch and dinner since Harry Truman was still occupying the White House. It’s also one of the few remaining spots in the Western Neighborhoods that still has hot coffee and the morning Chronicle available at 6 a.m., day in and day out. 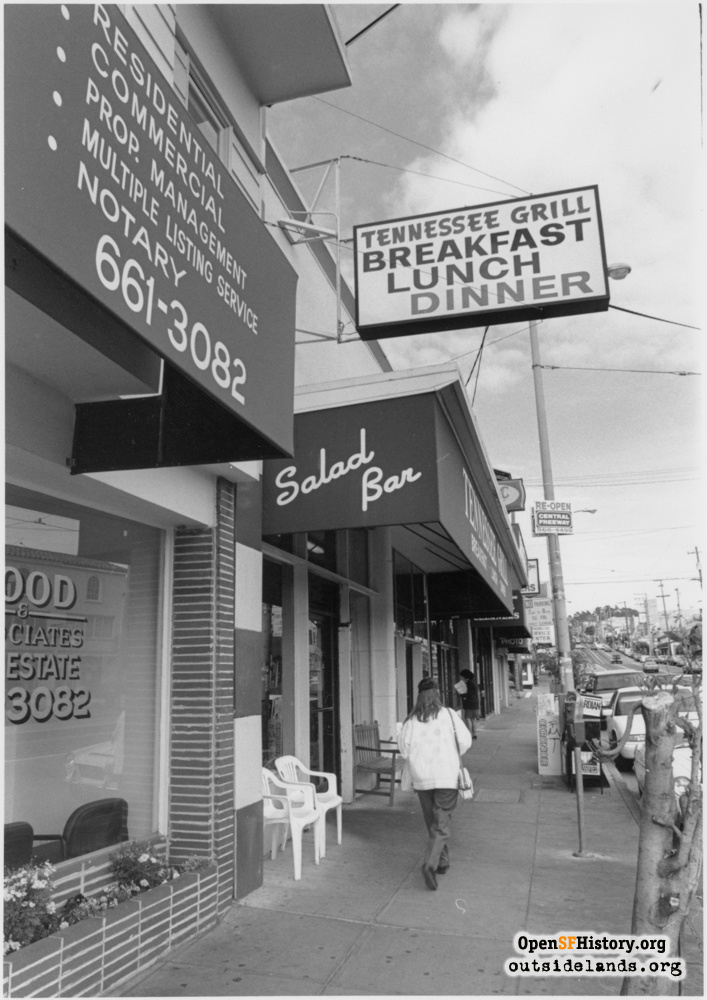 View north to Tennessee Grill. 1990s - Richmond Review Newspaper Collection / Courtesy of Paul Kozakiewicz, Richmond Review
THANH LONG—46TH AVENUE & JUDAH—1971—Operating in the Outer Sunset since 1971 when grandmother Diana An took over a small neighborhood establishment, the Vietnamese eatery expanded considerably into adjacent commercial spaces after 1975 when she was able to bring the rest of her family to America from Vietnam.
TIA MARGARITA—19TH AVENUE & CLEMENT—1963—Two couples founded the business in 1963 and it was immediately popular with local diners. Sadly, three of the four founders died too young, and in 1975, the remaining original owner, Virginia Hobbs, brought her two daughters into the family business. After Virginia’s passing in 2006, the family continued the business, and Virginia’s granddaughter, Jennifer Corwin, is now the third-generation to operate the spot.
TOMMY’S MEXICAN RESTAURANT—23RD AVENUE & GEARY—1965—Founding couple, Tommy and Elmy Bermejo, began dispensing classic Mexican food and the world’s best Margaritas along busy Geary Boulevard in 1965, attracting a loyal following that still continues more than 55 years later.
TOY BOAT BY JANE—5TH AVENUE & CLEMENT—1982—Founded as Toy Boat Dessert Café by Jesse & Roberta Fink nearly 40 years ago, the popular spot was recently taken over by a new owner Amanda Michael when the founding couple retired in 2020. The café has now expanded the menu offerings to include breads, sandwiches, and salads.
TRAD’R SAM’S—26TH AVENUE & GEARY—1937—This classic Polynesian bar that opened just a few years after the repeal of Prohibition still offers rum cocktails in a tropical atmosphere, though many patrons today simply order standard bar drinks. It is said to be the longest-operating tiki bar in the world.
WAWONA GATES—45TH AVENUE & SLOAT BOULEVARD—1974—Self-described “outdoor dining with full bar” serves lunch and dinner on a Saturday-only basis as a 2020 offshoot of the United Irish Cultural Center’s indoor dining room and bar that opened in 1974. Designed to comply with Covid-19 distancing guidelines, the set-up proved popular and continues in operation.