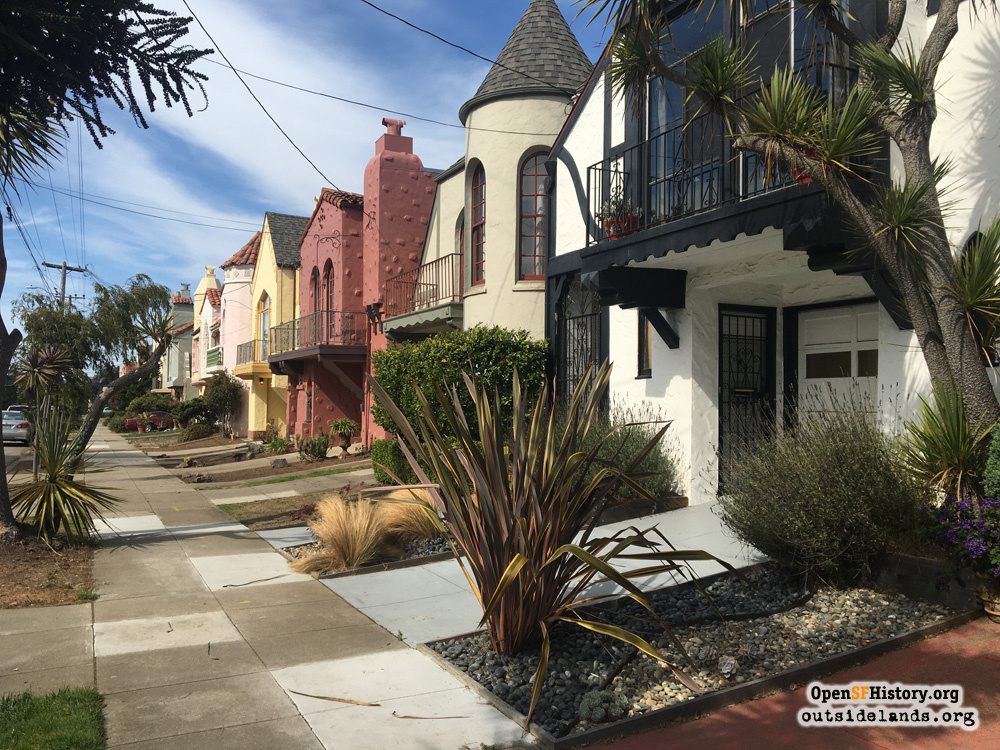 Streetwise: Residential Architecture of the Outside Lands

Homes in the west side possess many different styles, depending on the era of construction. Whether single-family or multi-family units, there were usually some standard features present.

Streetwise: Residential Architecture Of The Outside Lands

Homes in the west side of San Francisco possess many different styles, depending on the era of construction. Whether single-family or multi-family units—including houses, flats, apartments—there were usually some standard features present.

APARTMENT HOUSES— Although most home construction in the western neighborhoods involved single-family homes, there were also numerous low-rise three-story apartment buildings (no elevators required at the time of construction in the 1920s/30s/40s). In addition, many larger buildings of 5+ stories were also built in areas both north and south of Golden Gate Park, including eleven high-rise towers of 13 stories each at Parkmerced after World War II.

BUILT-IN ICE BOXES—Many early Doelger homes featured the convenience of built-in ice boxes. With a space-saving design, these units were constructed within a wall of cabinets, and included a drain to the outside, thus eliminating the old issue of having to empty a catch basin of melted ice before it overflowed onto the floor. I can still remember my grandmother using an ice box in her Doelger home on 21st Avenue near Rivera in the 1950s—as she patiently sat at home, waiting for the regular ice delivery until my parents finally persuaded her to buy an electric refrigerator.

BATHROOM TILEWORK—Tiny octagon-shaped floor and wall tiles, often in a pale-blue-and-white color scheme were standard in many 1920s bathrooms. By the 1930s, however, larger tiles in a kaleidoscope of pastel colors, often trimmed in black, dark brown, or forest green began appearing in newer homes.

BUILDERS—Numerous construction companies contributed to the settlement of the western neighborhoods over the years. Among the larger firms were Doelger, Galli, Gellert Brothers, Stoneson Brothers, Sunstream Homes, and Rousseau Brothers (with highly stylized “storybook” façades). Here is a listing of some of the many designs offered by Doelger over the years plus an image of Rousseau homes along 36th Avenue in the Sunset: https://www.outsidelands.org/doelger-types.php 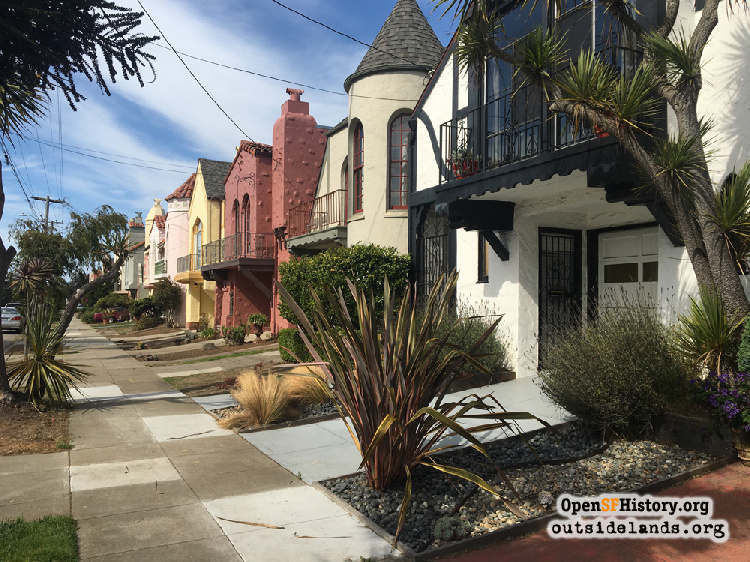 CAN OPENERS—Prior to the 1960s-era popularity of electric can openers, virtually every home featured a wall-mounted hand-crank can opener in the kitchen.

CENTER PATIOS—With most homes built touching one another, a center patio (sometimes located on the side of house adjacent to the kitchen) offered much-needed daylight and fresh air to multiple interior rooms along with additional skylights throughout the home. Eventually, many of these patios were covered over with glass skylights, minimizing fresh air, but creating an interior solarium for plants.

CHRISTMAS LIGHT FRAMES—Neighborhoods that celebrated the holidays with outdoor lighting often utilized custom-built wooden frames that outlined the front windows with lights. These were stored in the garage—often hung from hooks on the ceiling—and passed down from one owner to the next.

CONCRETE WASH TUBS—Most garages once contained twin concrete wash tubs in the era before automatic washing machines—one for washing the clothes and one for rinsing them. These also provided hours of amusement for kids and sailboats on rainy days, often leading to parental shouts from upstairs: “Do I hear water running down there?”

COOLERS—Constructed as part of kitchen cabinetry, coolers were built with open-slat shelving and a screened vent to the outside. With cooler weather in the western neighborhoods, these allowed for storage of fruits, vegetables, and other semi-perishable items in a space with natural ventilation, rather than having to store them in the relatively small refrigerators of the past.

DISHWASHERS—For most of us growing up in the 1950s and 1960s, these were non-mechanical and known as “children”.

DOOR RELEASE HANDLES—For 1920s/30s homes with glass-paneled entry doors at street level and an interior staircase to the main level, there was often a 12-inch mechanical door-release lever at the top of the stair case so that the resident could open the front door to visitors without having to descend and climb the stairs each time.

ENTRANCES—Earlier homes (left) often had outside entrance stairs while later homes (right) often utilized “tunnel entrances” for access. The tunnel entrance became particularly popular circa 1940 as multiple builders sought to increase the interior square footage of home on lots that were a standard 25 x 120 feet in size. By 1960, these tunnel entrance homes were thought to be susceptible to burglary because the front doors were completely hidden from street view. This is why they were often the first homes to be outfitted with locked wrought-iron entry gates, now a familiar sight in the western neighborhoods.

IRONING BOARDS—A built-in amenity in many 1930s/40s-era kitchens, these units were concealed behind a tall, narrow door—often with a small fireproof metal box built beneath for storing the iron itself. These units fell into decline by the 1960s when many clothing items were produced with “wrinkle-free” fabrics. Many of the original ironing boards were transformed into shelving units for spices, canned goods, or knick-knacks—and sometimes entirely walled over during kitchen renovation projects.

FIREPLACES—While central gas furnaces eliminated the most basic need for a fireplace, many homes continued to feature this amenity. Whether used or not, the fireplace was often the preferred photo location for first-day-of school, prom, holiday, and family gathering images such as the one in this 85-year-old home in the Parkside that formed a backdrop for hundreds of images over the years. 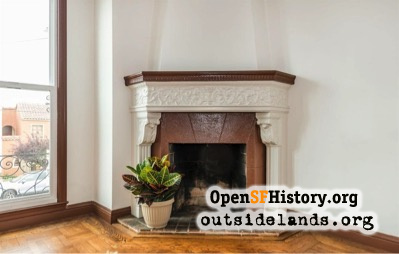 FLATS—San Francisco’s post-World War II housing crunch led to the construction of many more flats—essentially two full-sized homes stacked one on top of the other. These helped to relieve the post-War housing shortage—though no one ever relished carrying groceries from the garage to the top floor unit.

GARAGES—The growth in automobile ownership, particularly in the post-World War I era, helped bring about the inclusion of garages in new home construction from that point on. In many parts of the Richmond and Sunset Districts, front porches are a rare home amenity, likely because of the often-foggy weather. Still, every block had some older residents who enjoyed sitting at an open garage door while keeping an eye on the comings and goings of nearby neighbors and exchanging greetings with them. Neighborhood icon Jack Goldsworthy, long-time owner of the classic brick Mohawk service station that used to be located at the SE corner of 16th & Irving, was a regular presence at his adjacent home on 16th Avenue until his passing in 2012 at the age of 86. Read more: https://www.outsidelands.org/goldsworthy-gas.php 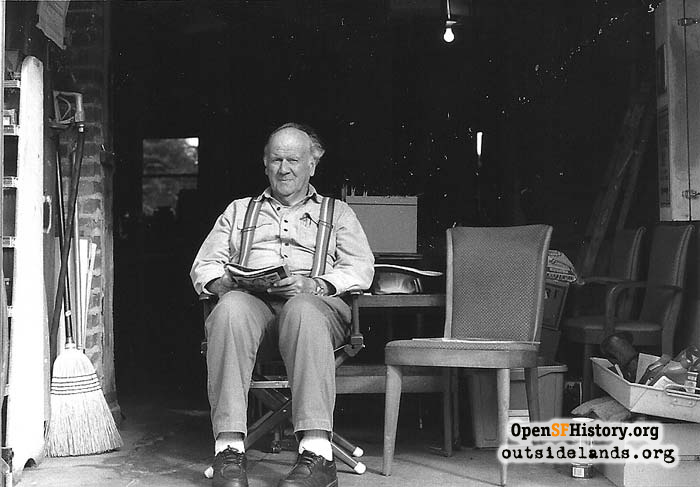 In his later years, Jack Goldsworthy would sit outside his garage on warm, sunny days and greet neighbors and passers-by., circa 2000 -

LAUNDRY CHUTES—Given the design of most homes with the living unit over the garage, laundry chutes were a popular amenity and also provided a convenient method for torturing smaller siblings.

LAWNS—As late as the 1970s, many San Francisco homes still had well-maintained tiny strips of lawn in the front. After several seasons of low rainfall beginning circa 1977, thousands of lawns, both front and back, were replaced with concrete, mulch, or rocks—or simply left as a dead patch of dirt and weeds. In an effort to improve neighborhood appearances and to reduce the amount of rainwater runoff into the sewer system, the City instituted a Front Yard Ambassador Program for the Sunset District in 2014. Read more: https://www.sfexaminer.com/news/sunset-residents-give-new-life-to-formerly-paved-front-yards-with-drought-tolerant-landscaping

RUMPUS ROOMS—This vintage term referred to a finished room (often with an attached half-bathroom) constructed on the garage level of a home. Often outfitted with knotty-pine paneling, these were rainy-day playrooms, guest rooms, party rooms, and places of escape for teens who relished independence from other family members. Many were outfitted with an old piano, elaborate bar set-ups and record players for pre-World War II entertaining. Read more: https://www.outsidelands.org/streetwise-knotty-pine.php

SPLIT BATHROOMS—Many home builders included the convenience of split bathrooms in their floor plans, with a toilet and small sink in one room, while the tub, shower, and full-size basin were in a separate room. This proved to be a much-welcomed amenity when homes filled up with baby-boomer children in the 1950s and 1960s and someone “really had to go” at the same time that another family member was using the tub or shower.

STOVES—Whether Wedgwood, Tappan, O’Keefe & Merritt, or other brands, the most popular stoves in the neighborhood were natural gas, though electric ranges began to emerge in newer construction and as part of kitchen remodels beginning in the late 1950s.

TELEPHONES—Mostly black Bakelite material with a rotary dial, kept on a built-in shelf in the hall. Homes had exactly ONE line and perhaps an extension phone in the garage. When a family had multiple kids in the 1950s, the rule was usually FIVE MINUTES PER CALL. The introduction of extra-long telephone cords allowed lovelorn teens a brief bit of privacy when trying to arrange a date for the school dance. Some larger families (I know of one such with 9 children, living on 10th Avenue near Judah in the 1960s) resorted to installation of a second line in the name of family harmony. These were often listed in the telephone directory beneath the parents’ listing as CHILDREN’S TELEPHONE.

TRADE ENTRANCES—A small side door, adjacent to the garage and usually kept unlocked, led to a separate walkway (separated from the garage by a solid wall) up a wooden staircase to a door adjacent to the kitchen. This was essential in the days when homes had daily deliveries of ice, wood, coal, groceries, and many other goods and services. Gradually, these entrances were bolted out of security concerns, and today, many of them serve as entranceways leading to old rumpus rooms that have been converted into living units.