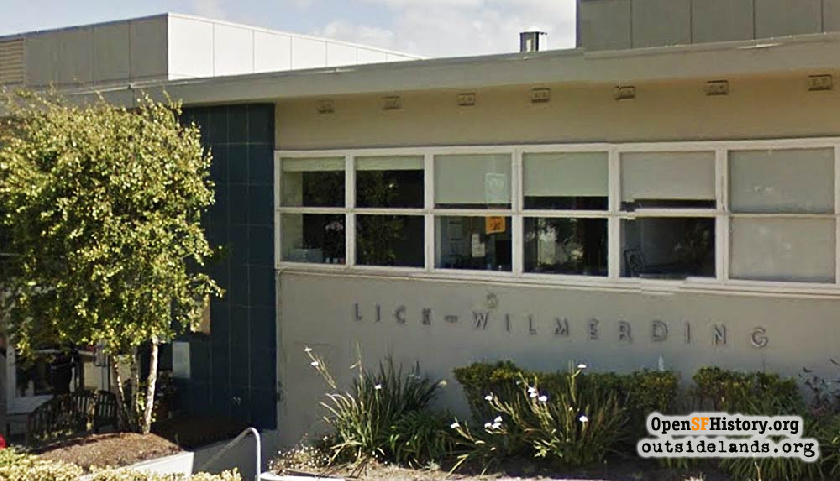 History of an Ocean Avenue school made of other schools.

It’s a given that when two San Franciscans meet for the first time, the #1 question that will be spoken is, “Where’d you go to school?”—with both speaker and listener clearly understanding that the question refers to high school.

And while the school mentioned is often Lowell, Lincoln, Washington, St. Ignatius, Sacred Heart-Cathedral, Riordan, Mercy, or one of several others, there is one high school that has been quietly operating under the radar for more than 60 years at 755 Ocean Avenue—Lick-Wilmerding. A San Francisco institution since 1955, the school has an interesting triple-pronged origin, based on the actions of three generous benefactors more than 120 years ago. 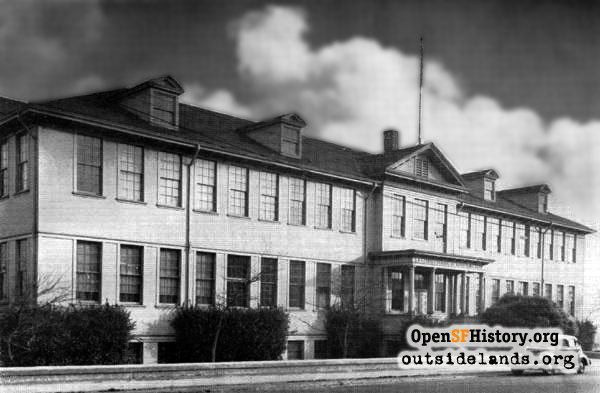 In January of 1895, the California School of Mechanical Arts, often referred to as “Lick” for its original financial benefactor James Lick who donated $540,000 to endow the school, opened in San Francisco. It offered free education to both boys and girls with a curriculum that combined general intellectual preparation with technical and vocational instruction.

One year earlier, Jellis Wilmerding left $400,000 to the Regents of the University of California to fund the Wilmerding School of Industrial Arts—a school for boys specializing in building trades and architectural drafting. The Wilmerding School was located adjacent to the California School of Mechanical Arts, and the two institutions soon shared the services of George Merrill as Director of each school.

Also in 1894, Miranda Lux, originally from Rhode Island and a long-time supporter of the San Francisco Protestant Orphan Asylum, died and left a significant bequest, directing her executors: “It is my desire to assist in furnishing facilities for the education of young children in what is known as ‘manual training’ and all kinds of training by and through which habits of industry and practical knowledge of those things which are useful in earning a living may be acquired.” The Lux School for Industrial Training for Girls began operating out of Lick’s building before Lux built its own adjacent facilities. The curriculum was organized around five subjects: sewing and textiles, food, health, art, and retailing/merchandising. George Merrill, already managing both Lick and the Wilmerding schools, was also hired by the Lux trustees to manage their new school. 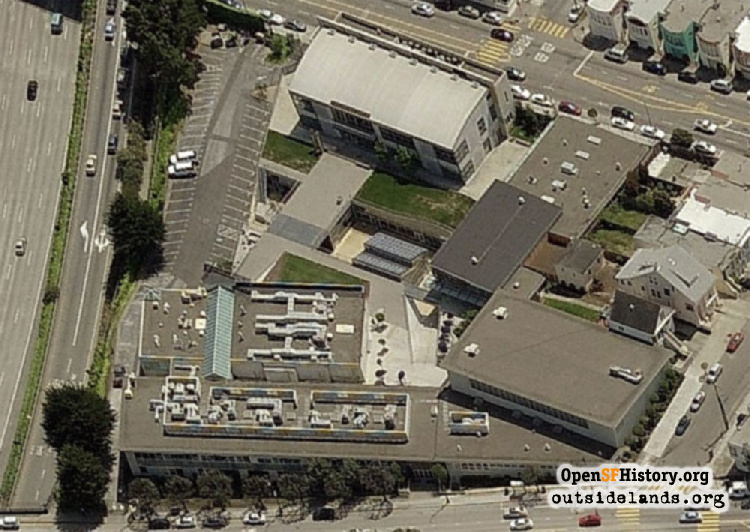 From the post-earthquake years until 1939, the three schools shared facilities and faculty at the 17th Street and Potrero Avenue site in the Mission District. Later, the institutions began operating in a more independent fashion. Lux eventually closed down in the early 1950s, and its students transitioned into Lick, with Lux’s assets and endowment moving into an entity known as the Lux Foundation, which continues to focus on the educational needs of children in San Francisco. At about the same time, California School of Mechanical Arts (Lick) and the Wilmerding School of Industrial Arts formally merged their operations, and in 1955, the school moved to a new campus on Ocean Avenue, re-branding itself Lick-Wilmerding High School, a boys-only institution for 17 years, until returning to co-ed status in 1972.

The school aptly describes itself as “A private school with public purpose, Lick-Wilmerding High School develops the head, heart, and hands of highly motivated students from all walks of life, inspiring them to become lifelong learners who contribute to the world with confidence and compassion.”

Today, Lick-Wilmerding is a fully co-educational college preparatory institution with 490 students from more than 130 different middle schools. Each year, the school receives 900 applications for the 125 seats in the incoming 9th Grade class. There is a high level of ethnic diversity with nearly 60% of the students self-identifying as a race other than Caucasian, including 26% who categorize themselves as multi-racial.

Based on the early endowment funds from the Lick, the Wilmerding, and the Lux trusts (nearly $15 million in today’s dollars), the three schools were long able to offer a tuition-free education to students—a practice that continued even after the merger and the 1955 move to Ocean Avenue. By the mid-1970s, however, costs had risen to the point that a tuition program had to be introduced, though with endowment funds subsidizing the cost, based on a student’s family circumstances. Today, the program is known as Flexible Tuition, with parents paying as little as $1,000 per school year, based on a sliding scale and demonstrated financial need. Nearly 40% of current students qualify for Flex Tuition, with the full annual amount now set at $42,500. 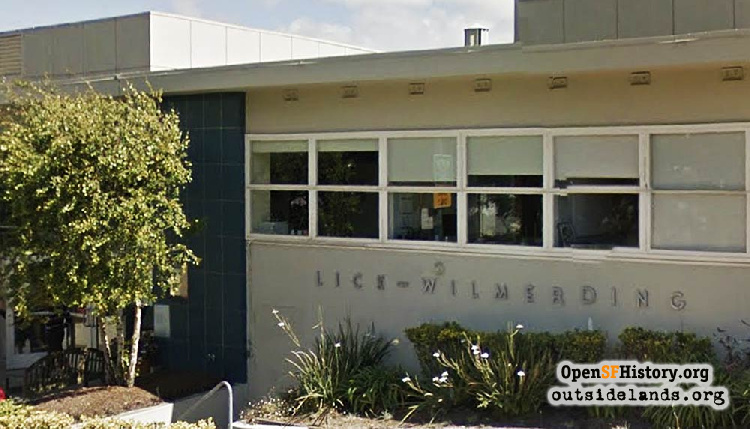 Author’s note: Lick-Wilmerding has long required an “entrance exam” for admission, and in the 1960s, that test was scheduled several weeks in advance of similar tests for admission to San Francisco’s boys’ Catholic high schools. It came as no surprise that the author and many of his St. Cecilia School classmates were in Lick’s gymnasium taking the Lick entrance exam as “practice” on a cold Saturday morning back in January of 1966—the cost was a rather modest $5 then—and just for the record, I PASSED!

Remaining faithful to its century-old history as a pioneering institution in the technical arts, LWHS offers a unique collection of shop classes, including a basic understanding of the qualities and characteristics of materials in the Glass, Electronics, Machine, Jewelry and Wood Shops. Other courses serve to foster an appreciation of the design principles first introduced in the Drafting & Design courses.

Campus facilities have been expanded and improved since the Ocean Avenue campus was opened in 1955, including the technical arts shops, cafeteria, full-court gymnasium with rock climbing wall, music studio, dance studio, photography studio with darkroom, 3 computer labs, and a 30,000-volume library. The school maintains a partnership with the adjacent City College of San Francisco for the use of their classrooms, laboratories, and sports facilities. Among the 75 faculty members employed by Lick-Wilmerding, the vast majority possess master’s degrees, while eight have earned their doctorates.

Known as the Tigers, nearly 75% of Lick-Wilmerding students participate in one or more team sports—with a total of 15 teams from which to choose. There are also more than 40 student-led groups and organizations, including an extensive music program. In 2014, it was reported that Lick-Wilmerding students achieved the 8th highest SAT scores in the United States. As a college prep institution, virtually all graduates continue their educations beyond high school, and members of recent classes have been accepted at more than 75 different colleges and universities.

Today, Lick-Wilmerding grads go on to enjoy a variety of careers in engineering, architecture, technology, and the fine arts. The school continues to build its endowment, and in keeping with the noble aspirations of founders James Lick, Jellis Wilmerding, and Miranda Lux, alums have been very generous in donating to the school that helped them along their own personal paths to success.

Update: Here’s a YouTube link that talks about plans for the site as well as a photo timeline showing demolition of the 1955 administration wing facing Ocean Avenue just below the gym.