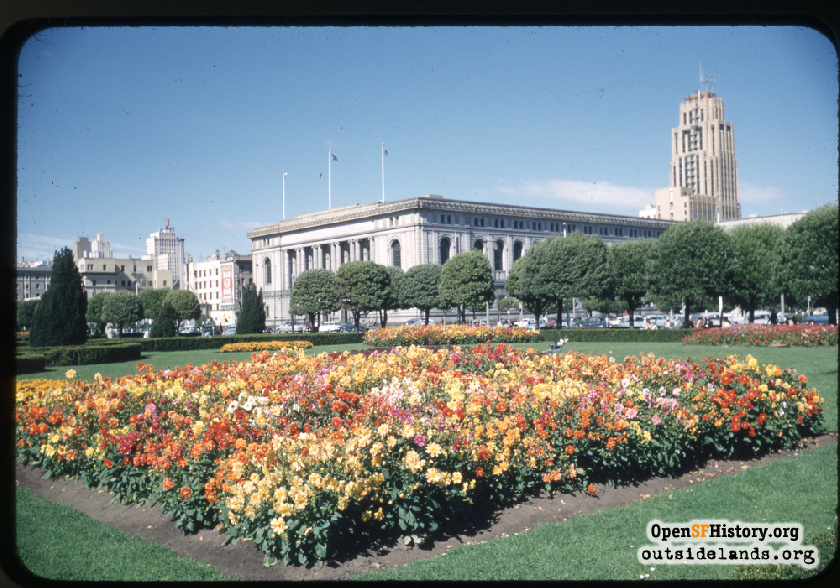 Streetwise: My Love Affair with SFPL

A paean to libraries over six decades.

Streetwise: My Love Affair with SFPL

From the time that I acquired my very first library card at the age of six, I’ve had an on-again/off-again love affair with the San Francisco Public Library (SFPL).

My first experience with that institution, other than accompanying Mom when she picked up or dropped off a book or two for herself on weekly shopping trips in the mid-1950s, was a Parkside School field trip exactly 60 years ago, in October of 1957.

It was a drizzly day, and our entire Kindergarten class was dressed in bright yellow slickers and rain hats, plus the black rubber galoshes that were usual back then. We walked two-by-two, hand-in-hand, from 24th Avenue and Ulloa Street to 23rd Avenue and Taraval Street to the Parkside Branch library that afternoon. Once there, we seated ourselves in a semi-circle on the floor of the reading room that has the tall windows that facing southwest. As we were settling in on that warm radiant-heated cork floor, with a crackling fire in the big copper-clad fireplace, a pleasant librarian arrived to read a story about a family of ducks to a squirming group of excited youngsters. That day is my fondest memory from my first year in school. 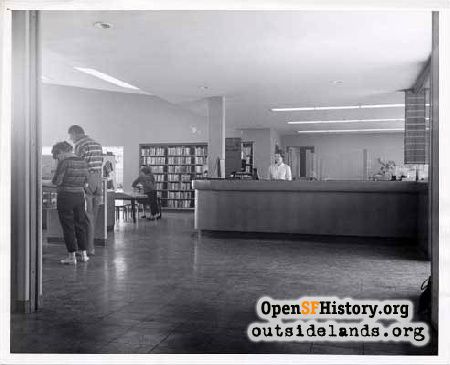 Thanks to encouragement of our teacher, Mrs. Beckerman, I went back to the Parkside Branch a few days later with Dad, and the nice lady at the desk issued me my very own library card, boldly printed with my name in capital letters. I thought it was the best gift I had ever received and I carefully placed it in my nightstand drawer once we returned home, checking on it each and every morning.

Nice-lady-at-the-desk took the time to remind me of a few rules:

1) Speak very quietly when in the library.
2) Six was the maximum number of books allowed for check-out at one time.
3) Books had to be returned by the due date or else there would be a fine. 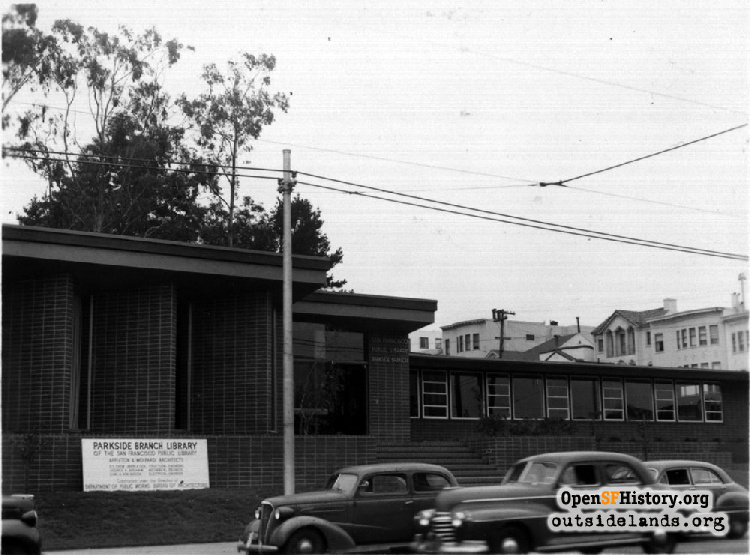 Parkside branch of the San Francisco Library about the time of its opening at 1200 Taraval Street near 22nd Avenue., 1951 - Parkside District Improvement Club Scrapbooks

On that visit, I eagerly scanned the shelves on the back wall (where tall windows framed the eucalyptus trees in McCoppin Park) to the spot where the children’s books were kept in those days, and quickly selected six to take home with me. For most of my grammar school days, I was a weekly visitor to the Parkside branch, returning last week’s books and picking out five or six new ones.

In those days, check-out was a fascinating process. The open book, its pocket card, and the patron’s library card were all placed face-up on the base of a large microfilm recording machine. When the documents were lined up, the librarian pressed a button to record the image for library records. By the 1970s, this process was changed to having the patron write the title/author on a slip of paper that the librarian would file before placing a slip of brightly colored paper with the due date into the book’s pocket on the front page. This still seems to be a rare example of taking what was a slightly automated process and reducing it to a more manual operation.

The library was a home-away-from-home for many of us in grammar school years, and bumping into classmates and neighborhood friends was a regular event. As time went on, we all learned the intricacies of the card catalog and the Dewey Decimal System (something unknown to most people today). Librarians were always there to offer advice when a patron was looking for something new or a bit more advanced than the usual offerings in the children’s section. On the Friday afternoon of John F. Kennedy’s assassination in 1963, a librarian wisely mentioned, “Be sure and check out a few good books—weekend television programs will all be cancelled.” So right she was—and escaping into a good book has always been a positive refuge for me from unhappy events in life.

The old Main Library was also a treasure trove once I was in high school. Just a quick bus ride from the Stanyan Street campus of St. Ignatius (S.I.) on the old #5 McAllister bus, I visited the old Main at least three times a week during my early high school years. That spot had many holdings that were not stocked in the branches. Everything from bound magazines and newspapers to special collections to historical displays were readily available to all patrons. Rainy days, steam heat, and a few individuals with an addiction to alcohol sometimes made for an uncomfortable atmosphere, but the thrill of reading old documents first-hand made up for that. While studying World War II in World History class in the Fall of 1966, I was simultaneously reading TIME magazine articles from 1941-45, thus getting an incredibly accurate feel of how the public perceived the war situation—that year marked the 25th anniversary of the Pearl Harbor attack. Far from an assured victory, it was very clear that in the early months of 1942, things were not looking at all good for the Allied forces. This led to some interesting dinnertime conversations with my parents about their own personal memories of those days.

As high school progressed, term papers often required more research than was possible at the Parkside Branch, and I began to stray from SFPL. Many S.I. students discovered the vast resources of the nearby University of San Francisco (USF) Library—plus the holdings of the Sutro Library, then located in the same building, at the back of the ground floor, facing Golden Gate Avenue. In addition, the library at San Francisco State was open to non-students at the time, thus supplying access to additional reference material, even closer to home for many of us.

Later, when I was a student at USF, I discovered that various branches of SFPL often held vastly different collections. During my first few years as an English major, I found that the West Portal Branch on Ulloa and Lenox Way, as well as the Sunset Branch at 18th Avenue and Irving Street, both had large collections of Literary Criticism—far greater than could be found at Parkside—thus speeding along my work on numerous research papers. I still remember the end of each semester when the front trunk of my trusty Volkswagen bug was loaded with books to be returned to multiple branch libraries—some on time and many not. 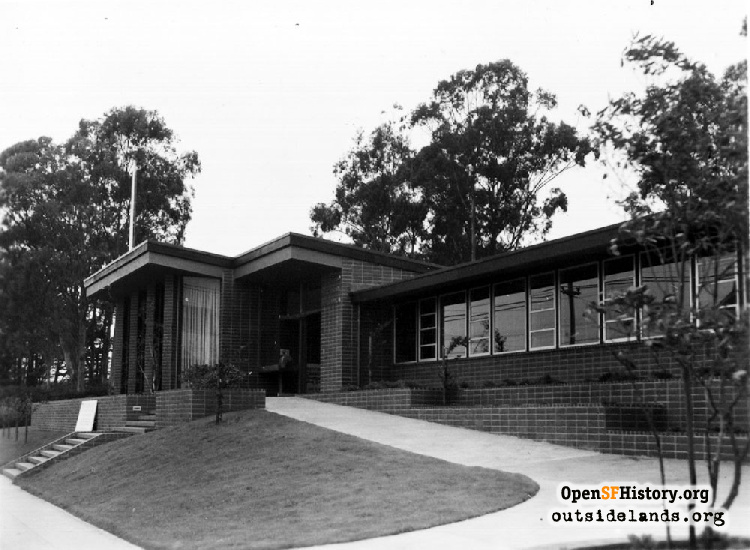 Parkside branch of the San Francisco Public Library at 1200 Taraval Street., circa 1950 -

Later, when I became a Business major, I learned that the Mechanics' Institute library downtown had a vast collection of annual reports issued by many large- and medium-sized corporations. With membership open to the public, it was a quick streetcar ride from the Parkside to Market and Post Streets to make use of those collections during regular evening hours.

After graduation, I had my first apartment at Parkmerced and found that the Merced Branch at 19th Avenue and Winston Drive had an especially large collection of “easy reading”—novels, mysteries, etc.—likely geared to older patrons who made up the majority of nearby residents at Parkmerced and Stonestown. Libraries still maintained both day and evening hours then, so it was easy to stop off after work and pick up some light reading. Meanwhile, SF State was increasing its collection of San Francisco history (Dewey Decimal classification 917.9461), and that fueled my addiction to local history.

With the passage of Proposition 13 in 1978, property tax increases were suddenly controlled and government budgets had to be re-evaluated. Surely, no politicians suffered reductions in office staffs, but the spending cuts that were approved at the time seemed designed to place maximum impact on libraries in particular, with open hours cut drastically—definitely not a good time for those of us who were regular users. Gradually, these limited hours became the status quo, and entire generations of high school students never experienced the joys of studying/hanging out until the old 9:00 p.m. closing time at a local branch library.

For about 15 years, from 1980-1995, when I was living on 22nd Avenue, the hours of the nearby Parkside branch were very difficult to remember—not open until 1:00 p.m. some days, virtually no evening hours, closed completely on a couple of weekdays, limited Saturday hours, and closed Sundays. In addition, with reduced budgets, there were very few new books, no multiple copies of popular titles (if the branch’s one copy was checked out, there was usually a very long waiting list), and staff cuts that limited the ability of librarians to help patrons. I soon fell out of love with SFPL and even allowed my once-treasured library card to expire. The romance was over.

Books were still my friends, though, and I continued to acquire them at the then-new Brentano’s on the second level of the new Stonestown Galleria, and also at a short-lived discounter, Crown Books at Lakeshore Plaza on Sloat Boulevard. Ultimately, there was Amazon—a books-only retailer in its early days.

Slowly, though, things began to change in the world of libraries. Selections were being updated, including audio and video titles. The old card catalog was replaced with an electronic look-up system with the Library of Congress classification system. More study cubes were being installed, and online computer access was offered—initially for an extra fee—but then such services became standard. 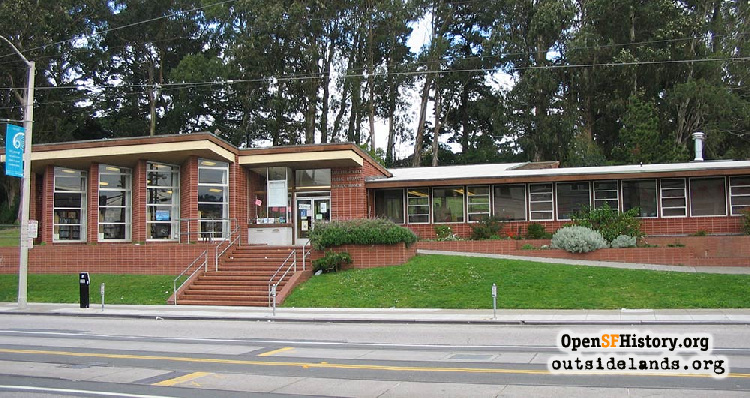 On my first visit to the “New Main” when it opened in 1996, I was impressed with the architecture, even though I missed certain features of the old building. Among the new designs were the round skylight and computer access in glass-enclosed study rooms—and the innovative “wallpaper” in these rooms consisted of thousands of laminated cards from the drawers of the old card catalog. Gone were the stacks where you could browse endlessly, but staff members were readily available to help you find what was needed. No more leafing through yellowing newspapers bound into large books, but the images were readily available onscreen, thus helping me immensely during the years that I was actively researching my family’s San Francisco genealogy going back to 1860. Those cumbersome City Directories, once lined up in rows in the “Bound Periodicals” room on the third floor at the old Main, were now quickly accessible online—a big help for researchers.

Once I began writing local history books in this millennium, the resources of the San Francisco History Room’s photo collection were a treasure trove. Even working remotely, I could research various topics—“Lowell High School,” “Golden Gate Park Children’s Playground,” “Richmond District,” “Bank of America,” “Bakeries,” “Emporium Christmas Roof Rides,” etc.—and immediately be viewing thousands of images. With one quick phone call to the archivist, I was able to order high-resolution photos that met the publisher’s exact printing specifications. After making payment, the images were then instantly sent to me as an email attachment—and I received great service from that department time and again.

As my books were published, a very nice librarian at dear old Parkside Branch set me up to do a series of book talks there and at a number of other branches—Anza, Merced, Ortega, Sunset, West Portal. With built-in equipment at most locations, it was very easy to include photo images with the presentation. It was particularly apt that one of my first 2014-15 talks was in the comfortable reading room at Parkside Branch—nearly 60 years after my first visit there as a Kindergarten student.

Today, libraries represent many things to everyone. I was extremely pleased to read a recent San Francisco Chronicle article reporting that ALL San Francisco Public Library branches are now open Sundays, effective in June of 2017. In addition, funding has now been approved so that all branches—even the smaller ones—will be open a minimum of 50-60 hours per week, including some evening hours at every branch. This is a near-restoration of the pre-Prop 13 operating hours and a huge gift to all users.

Who says you can’t go back to an old love?