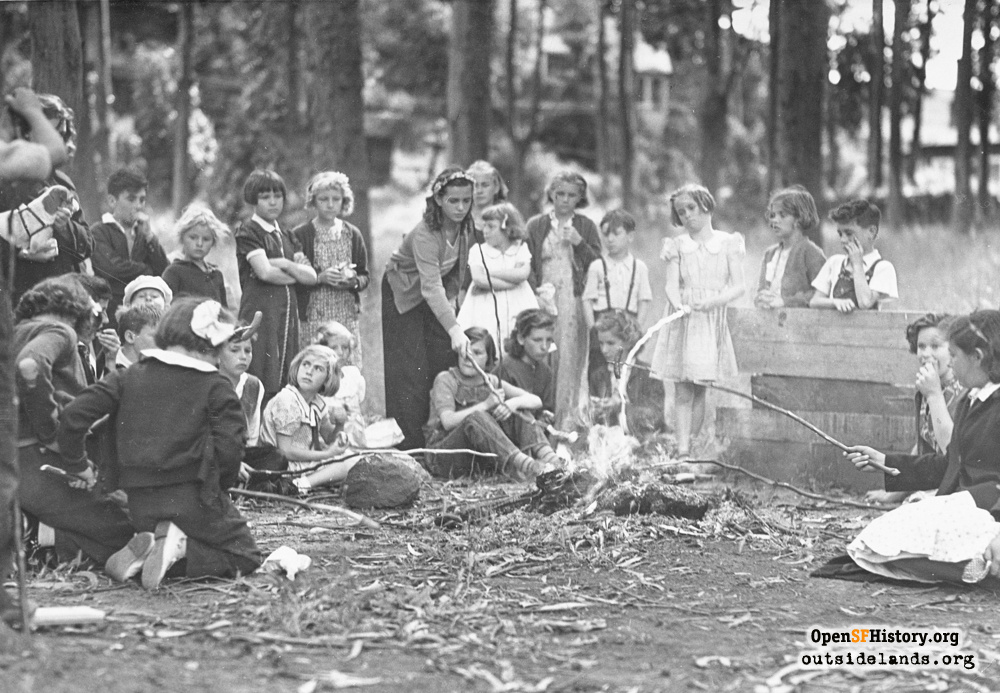 How to occupy a fog-bound San Francisco kid in the 1950s.

San Francisco kids have always known that the each school year is marked at beginning and end by oppressively hot weather. In fact, the hottest 100+ degree days locally have invariably occurred in June or September. During summer vacations, though, much of the city is surrounded by a cool swirling mist of daily fog. “Clearing to near the coast by dusk” is a dismal but regular summertime weather report in the Richmond and Sunset Districts.

What are school kids to do for entertainment under those circumstances? Unlike today’s electronics-addicted youth, in the past, we all had plenty of low-tech options to amuse us—even in the summer fog.

Board Games—Most homes had a few standard boxed games tucked away in the front hall closet, including Checkers, Chess, Monopoly, Password, Scrabble, Skunk, and Yahtzee, plus a deck of playing cards and a collection of poker chips. Some of my cousins had a very wise mother who regularly told us, “If you can sing, dance, and play cards, you will always be able to have fun.”

Camp—Whether daytime activities at Silver Tree in Glen Canyon or sleepovers in places ranging from CYO Camp in Occidental to Camp Ben Swig in Saratoga, this activity was usually a love-it or hate-it experience for most youngsters. In the past, the focus was roughing it in the great outdoors, but today, summer camps usually have a specific theme, including designing comics, painting, computer programming, language immersion, math, cooking, science, nature, photography, and architecture. 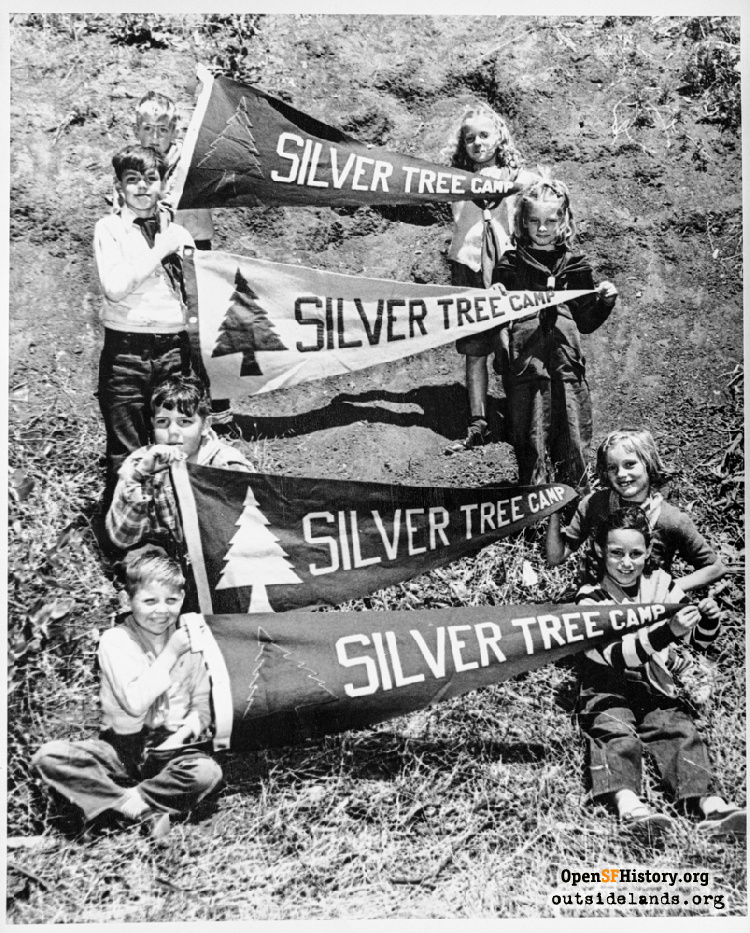 Collecting—Empty cigar boxes from the corner drugstore were not just for school supplies. During the summer, these free handouts held various collections of coins, stamps, bottle caps, rocks, seashells, baseball cards, or whatever else struck a child’s interest. Coin collecting often took the form of walking from bank to bank along a couple of flat blocks of a neighborhood commercial corridor (Clement, Irving, West Portal) and buying a 50-cent roll of pennies, then sorting through them for desired dates/mint marks, replacing the ones that were selected, then re-rolling them in fresh wrappers and exchanging for a new roll at the next bank down the street. Just for the record, I’m still looking for that ever-elusive 1909-S (for San Francisco) Lincoln penny.

Disneyland—Visiting here was every kid’s summer wish. Prior to the 1970s, most families handled this as a road trip, with frequent snack/restroom breaks before spending the night somewhere along the coast near Santa Barbara. Also included in the itinerary would be a visit to Marineland of the Pacific—an aquarium-amusement park that operated from 1954 to 1987 on the Palo Verde peninsula of Los Angeles County. Each family’s long-anticipated arrival at Disneyland via the Harbor Freeway was marked by excited screams of “WE’RE HERE!” by thousands of youngsters as vehicles slowly crept toward the final destination. Primed by schoolmates and Disney’s Sunday night TV program, everyone knew which attractions they wanted to visit first, and which were the scariest—though prior to the 1980s, only the Matterhorn bobsleds could truly be described as a “thrill ride.” No visit to Orange County was complete without a chicken dinner (including biscuits served with legendary boysenberry jam) at the nearby low-tech Knott’s Berry Farm. Throughout the entire vacation trip, kids ingested tons of waffles and gallons of maple syrup for breakfast each day plus dozens of hot dogs for lunch, while accumulating endless happy stories to share with classmates in September.

Fireworks—Fireworks have long been banned in San Francisco, but in the 1950s/60s, we invariably made the trek to the parking lot of the Westlake Shopping Center to purchase all sorts of materials with which to celebrate our nation’s independence. When the big night came, virtually every block in the Sunset and Richmond Districts was filled with children and teens—all dressed in heavy jackets to ward off the fog—setting off a variety of pyrotechnics. As we got older, we began to hear that even more spectacular devices were readily available on the streets of Chinatown. Many kids from the western neighborhoods quickly learned that taking a MUNI streetcar down Market Street and then transferring to the 30-Stockton bus would have them shopping on Grant Avenue in about half-an-hour. By the late 1960s, sedate sparklers were replaced with cherry bombs and bottle rockets that made the entire city feel like it was under siege. Neighbors, especially the notoriously cranky ones—“You kids stay off my lawn!”—were constantly on their toes for weeks before and after the holiday as random fire crackers were deliberately set off in the tunnel entrances of their homes.

Giants Baseball—Afternoon games at Candlestick Park usually had a fair chance of sunny weather, even during a San Francisco summer. Saturday double-headers were a special bargain with a $1 general admission ticket. MUNI helped out the attendance numbers considerably by running a special line—BALLPARK EXPRESS—along major streets such as Geary Boulevard, Van Ness Avenue, and 19th Avenue, so that direct travel to Candlestick was fast, cheap, and easy, often requiring no transfers at all. 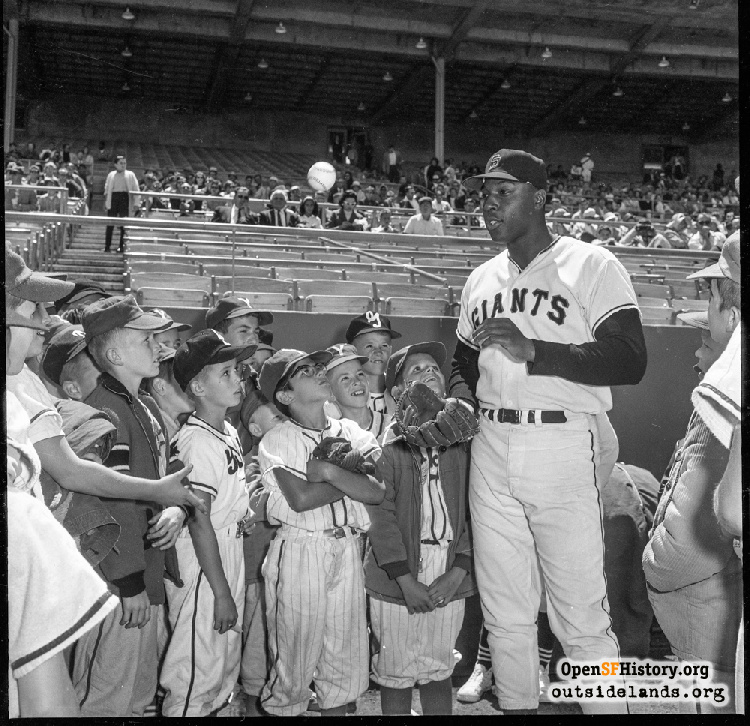 Willie McCovey and kids at Candlestick Park, circa 1961 -

Golden Gate Park—The ultimate kids’ recreation spot, easily accessible by walking, biking, or taking MUNI. In days gone by, admission to the museum, aquarium, and planetarium were all free.

Helping Out—Every family seemed to have an elderly relative who needed some looking after. Many kids were assigned to grandparent patrol one or two days each month—mowing/watering lawns, trimming shrubs, cleaning out basements, or just helping out with daily chores around the house. Some earned a bit of extra spending money doing things like this—with the added benefit that most grandparents would provide unlimited treats with a conspiratorial warning—“don’t tell your parents.”

Ice Skating—Thousands remember the 48th Avenue ice rink, as well as two owned by Ice Follies stars Phyllis and Harris Legg (one on Ocean Avenue and another at 11th & Market Streets). Sutro’s continued to offer ice skating until its final 1966 closure and subsequent fire, though swimming had been discontinued in 1953-54 due to maintenance issues.

Library Visits—Local public libraries represented a peaceful oasis from squabbling siblings, blaring TVs, and parents who decided it was high time that you cleaned your room. In those days, libraries emphasized reading and research—rather than simply after-school day care—though there was a certain social atmosphere in the evenings when teens congregated in order to “run into” members of the opposite sex until the usual 9 p.m. closing time.

Marin Town and Country Club—Even today, nearly 50 years after this Fairfax recreation spot closed for the last time, the very name still evokes warm nostalgia among everyone who visited—particularly during the peak years of the 1950s and 1960s. See Streetwise: In the Good Ol' Summertime 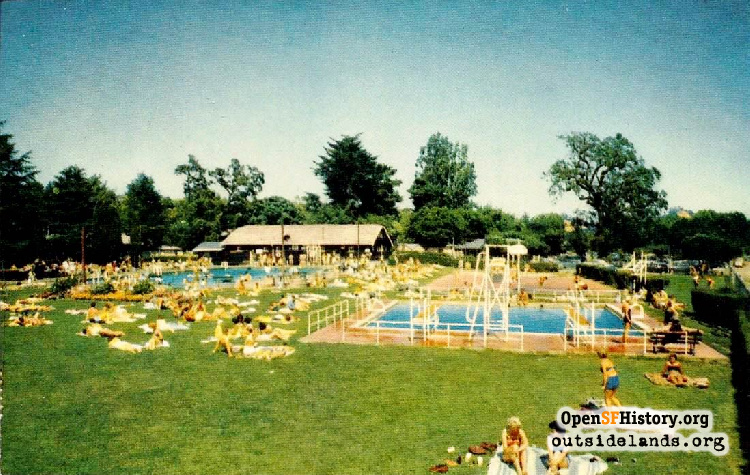 View of pool and recreation facilities in Marin County., 1960s -

Movies—In the 1960s, kids had the freedom to bike, walk, or take MUNI virtually anywhere in San Francisco. Neighborhood movie theaters were great places to socialize with friends, even when the film was not so good. The Parkside Theater offered a terrific bargain in the summer of 1962—matinees on Tuesdays and Fridays for just 25 cents (only $1.30 for a 13-event “season ticket”). For just a handful of coins, thousands of kids were entertained and fed for an afternoon, as older teens earned the minimum wage (then about $1 per hour) while aiming flashlights and whispering SHHHHH to the sugar-crazed mobs of youngsters. Many can still see the popcorn raining down at regular intervals from the balcony of the Parkside onto the heads of patrons in the main floor seats. Seats at the back of the main floor were highly prized as being “safe” from such incidents, and filled up quickly. 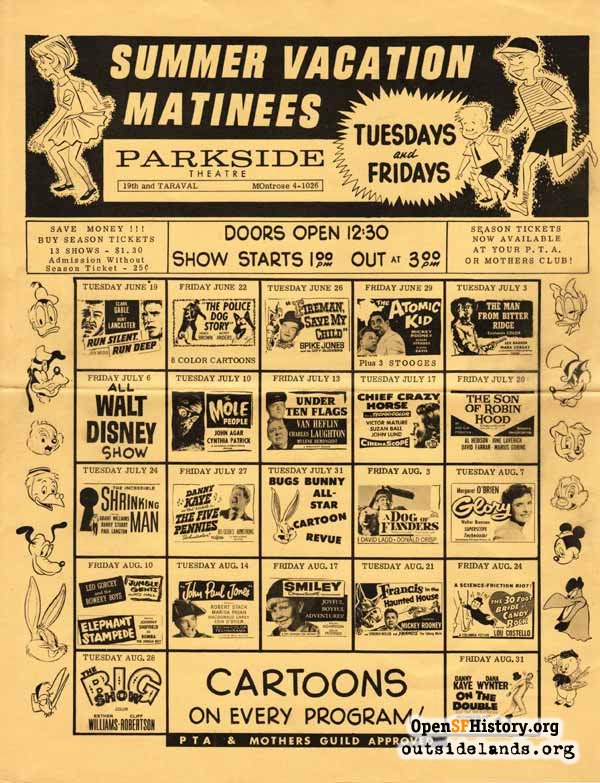 My Summer Reader—A weekly newsmagazine for kids that continued the theme of My Weekly Reader (distributed during the school year) with age-appropriate articles, games, puzzles, and short comics. Many youngsters felt quite grown-up to be receiving weekly mail addressed with their own names.

Playland—Armed with a handful of coins and a student “car ticket” for MUNI, most 1960s kids could amuse themselves easily, and also fill up on a variety of unhealthful snacks along the midway that local government would likely ban in the current era. The Fun House offered the best bargain in the place. For a mere dime in late 1950s (75 cents by the early 1970s), visitors could explore for hours—going from the rotating padded entrance gates and mirrored maze to the cavernous interior where female visitors had to be concerned that an unseen operator controlled blasts of air from the floor that would lift a skirt. Venturing deeper into the old wooden building on walkways and stairs that flexed up and down, there was the Joy Wheel, the rotating barrel, rocking horses, an incredible multi-story polished-wood slide that ran from high in the rafters to the main floor, and much more. By the late 1960s, many parents felt that it was no longer safe to allow younger children to visit Playland unsupervised. Business declined, and the beloved spot closed on Labor Day weekend of 1972. It was promptly demolished and eventually replaced by non-descript condos.

Russian River—Whether Guerneville, Monte Rio, or Rio Nido, Sonoma County was a summer getaway for generations of San Franciscans going back to the late 1800s. Once accessible mainly by train, post-World War II road improvements made the area easily reachable from the city by car in just over one hour.

San Mateo Park—In the early 1950s, many housebound Moms, cooped up during cold foggy spells, would experience symptoms of “cabin fever” by mid-summer. A couple of them would band together with another Mom who owned a station wagon, and haul off a group of youngsters to the sunshine in San Mateo’s Central Park along El Camino Real. With spacious picnic grounds, swings, slides, a baseball diamond, and even a miniature train circling the park, it gave many San Franciscans a much-need dose of summer sunshine.

Scouts—Scouting offered a variety of summer programs for members.

Shopping for School Clothes—Whether City of Paris or Sue Mills for Catholic school uniforms, Stonestown’s Bruce Bary for prep wear, or the aisles of Emporium, Sears, J. C. Penney, or GETs, everyone was out shopping by mid-August for back-to-school clothing. See Streetwise: Pleated Skirts and Starched Collars.

Summer Reading—In the past, many schools, both public and private, assigned summer reading lists for their students. Despite constant protests (deemed “whining” by parents), this practice helped many of us expand literary skills, while also offering parents some much-needed quiet time around the house. I still remember reading such classics as Jack London’s Call of the Wild, Edwin O’Connor’s The Last Hurrah, J. D. Salinger’s Catcher in the Rye, and Harper Lee’s To Kill a Mockingbird during various summers as a St. Ignatius student in the 1960s.

Swimming—By the 1960s, San Francisco neighborhoods were dotted with public swimming pools, and the venerable (but ice-cold) Fleishhacker Pool was still in operation adjacent to the Zoo. There were also summertime swim lessons offered at the Jewish Community Center, several YMCA locations, and private swim clubs.

The End—Summer would inevitably wind down, often with a family Labor Day outing—one last sweet taste of freedom. That night, just as the temperatures were beginning to warm up in San Francisco, tens of thousands of youngsters carefully laid out clothes and school supplies and went to bed early, trying to prepare for the new school year that was set to begin.

Those really were “the good old days” that so many of us miss today.