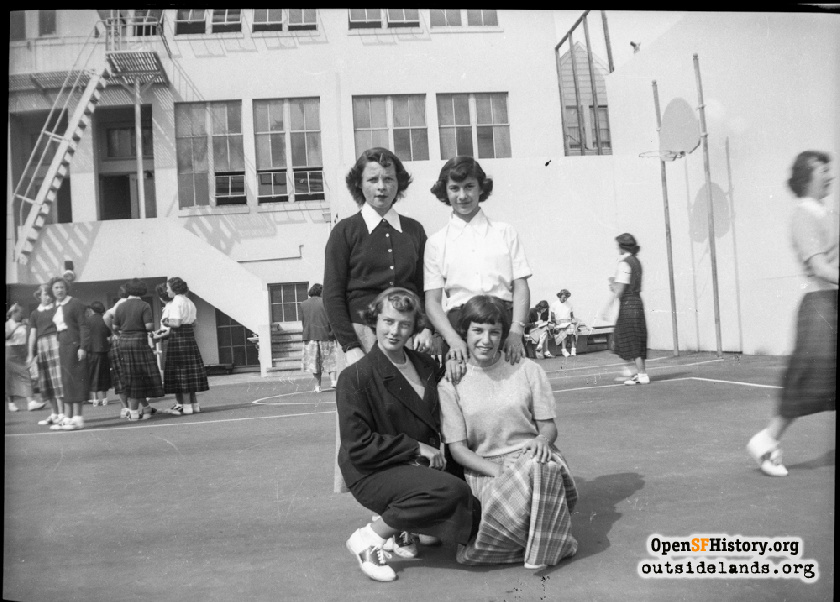 West side schools are ever changing. Frank Dunnigan looks at the past and present of education in the Outside Lands.

Frank Dunnigan, WNP member and columnist. -
Most readers are familiar with San Francisco’s private religious schools (primarily Jewish, Greek Orthodox, Lutheran, Roman Catholic, and Russian Orthodox) that have attracted solid numbers of San Francisco students for many years. Today, however, there has been a notable increase in the number of private, non-sectarian institutions serving students from pre-K to Grade 12.
The following schools advertise the accreditation of their programs, and have annual tuition rates starting at $2,000 for some of the preschools up to $50,000+ at some of the high schools. These schools are co-educational, except as noted, and all appear to have diverse student bodies, need-based tuition waivers/assistance, plus active programs in sports, music, science, and arts. Facts and figures on cost and enrollment numbers involved research through multiple listing groups as well as with the individual schools themselves.
Here is a brief look at 20 of the largest private, non-religious schools that are now operating on the western side of San Francisco—and serving well over 4,000 students. Note that an additional 8,000 students attend private, non-sectarian schools in other San Francisco neighborhoods—Bayview, Excelsior, Mission, Portola, Pacific Heights, and more—but that will be a topic for the OpenSFHistory STREETWISE column, to be published later this month.
BAY SCHOOL OF SAN FRANCISCO—Operating in the Presidio since 2014, the school occupies 3 historic buildings in the Main Post area—the only high school in the United States to be operating in a national park. The school has nearly 400 students in Grades 9-12. 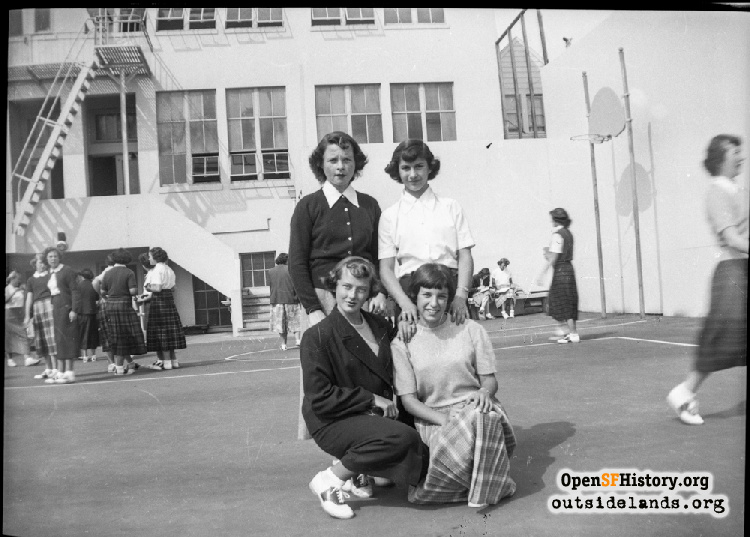 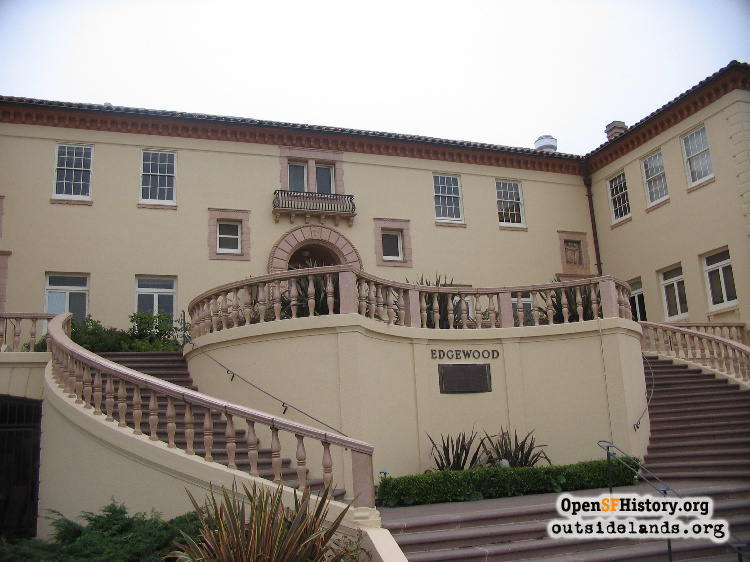 Edgewood Center for Children and Families near 30th and Vicente on November 18, 2007 - Courtesy of Woody LaBounty.
EDGEWOOD CENTER FOR CHILDREN AND FAMILIES—This Grade 1-12 school serves about 40 children with special needs, operating at the former Protestant Orphanage campus on Vicente Street in the Parkside District.
KATHERINE DELMAR BURKE—Operating on the western end of California Street in the Richmond District, Burke’s is an all-girls K-8 school with approximately 400 students. Founded as a K-12 school in 1908 in Pacific Heights, the school acquired the Sea Cliff area property in 1929-30 and moved its Nursery and Kindergarten operations there in 1936, with the lower school making the move to the new campus in 1949. In 1975, the high school closed its doors, with all operations consolidated at the Richmond District site.
KITTREDGE SCHOOL—A K-8 school with about 85 students, established 60 years ago, and operating on Lake Street in the Richmond District.
LICK-WILMERDING HIGH SCHOOL—A long-time San Francisco school founded with a philanthropic history and an emphasis on industrial and mechanical arts, the institution is now home to nearly 500 students on its Ocean Avenue campus. Read more: Streetwise—Lick-Wilmerding School

The Conservatory of Music at Ortega and 19th Avenue, now home to Lycee Francais, in August 2000.
LYCEE FRANCAIS—The French-speaking bi-lingual school has two campuses: PK-5 at the old St. Agnes School site on Ashbury Street (450) and Grades 6-12 at the old Conservatory of Music site at 19th Avenue and Ortega Street (400).
MONTESSORI CHILDREN’S CENTER—Operating in the Parkmerced neighborhood with about 65 students in Nursery-Pre-K-Kindergarten.
MOTHER GOOSE SCHOOL—A Nursery-K school with approximately 100 students, operating on 28th Avenue in the Richmond District.
MY CITY SCHOOL—A small Grade 5-8 school with about a dozen students, operating on 27th Avenue in the Richmond District.
ONE FIFTY PARKER AVENUE SCHOOL—A Nursery and Pre-K school with about 65 students, opened in 1954 and operating on Parker Avenue. 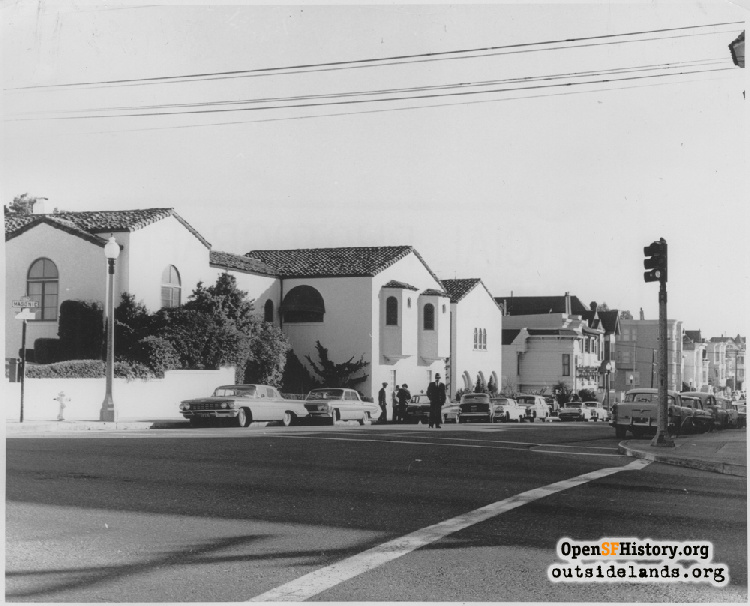 Carew & English Mortuary at Masonic and Golden Gate on February 23, 1962, now home to the San Francisco Day School - Chet Born, photographer, SF Fire Department / Courtesy of Guardians of the City
SAN FRANCISCO DAY SCHOOL—The school, with an enrollment of 400+ students has operated its K-8 classes on Masonic Avenue since the late 1970s.
SAN FRANCISCO GIRLS’ SCHOOL—Operating out of the former Star of the Sea campus on 9th Avenue in the Richmond District, the small school is home to 20 students from grades 9-12.
SAN FRANCISCO HIGH SCHOOL OF THE ARTS—A private arts school for students in grades 6-12 operating just off Stanyan Street near Golden Gate Park with about 25 students. 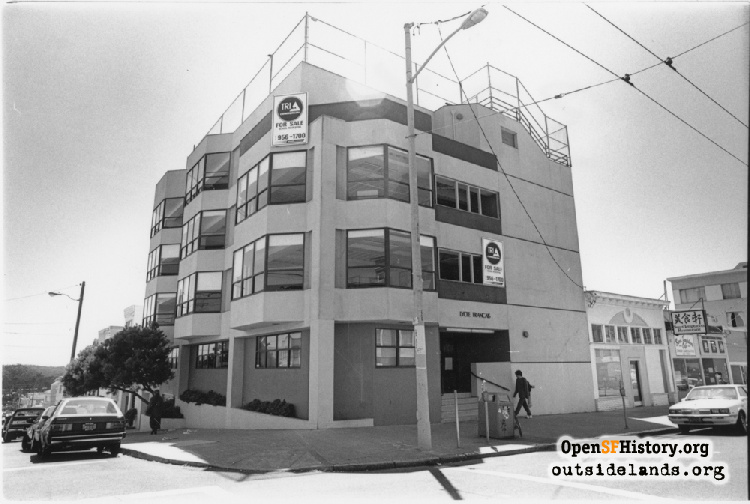 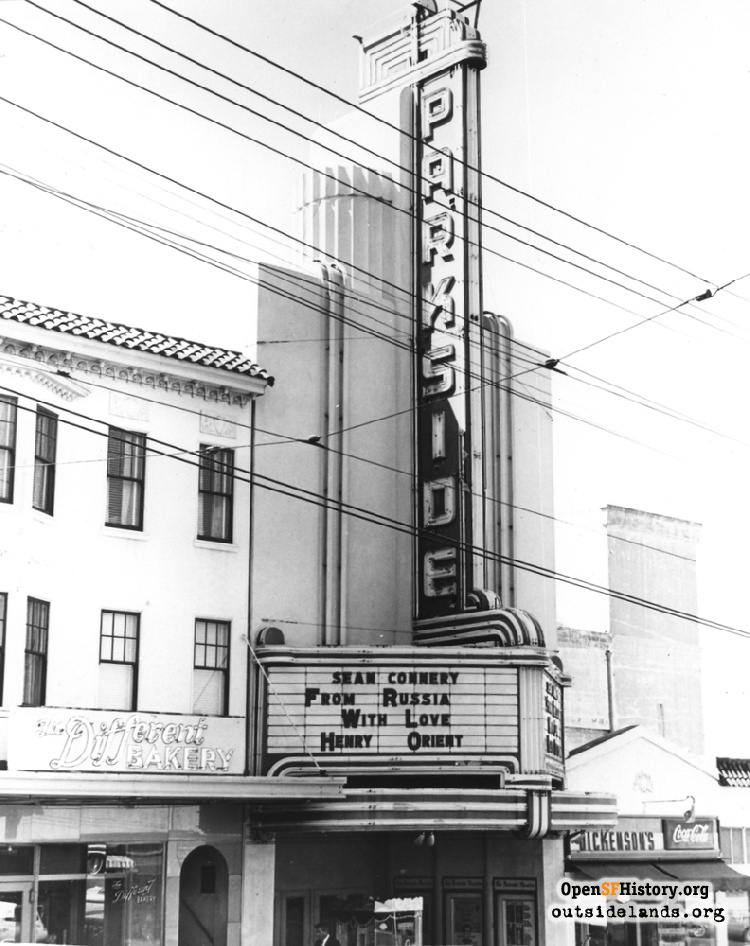 Parkside Theatre at Taraval and 19th Avenue, now home to a branch of the Stratford School, in October 1964 - Courtesy of Jack Tillmany
STRATFORD SCHOOL—Multiple locations, including a K-5 campus with 300+ students at the old St. Emydius School building on DeMontfort Avenue, just off Ocean Avenue. Stratford also operates a Nursery-Pre-K campus near 19th & Taraval at the site of the old Parkside Theatre, a PK-5 campus on 14th Avenue in the Richmond District, and a grade 6-8 campus at the former Corpus Christi School building near Alemany Boulevard in the Outer Mission/Excelsior neighborhood.
WOODSIDE INTERNATIONAL SCHOOL—This small high school with a 40-year history in San Francisco caters to both local and international students while operating on Irving Street in the Sunset District.