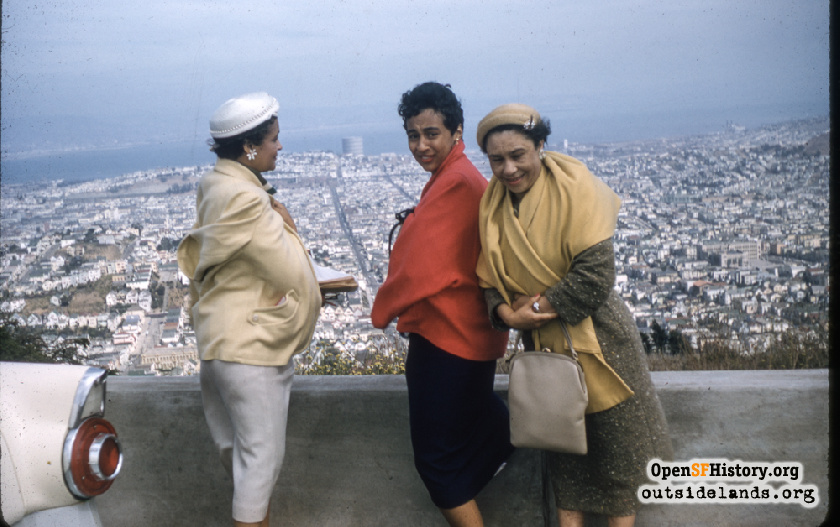 Streetwise: All Dressed Up In The Outside Lands

What did the Outside Lands get dressed up for? Frank Dunnigan reviews some of the fashion choices over the last century plus.

Frank Dunnigan, WNP member and columnist. -
Fashions have surely changed numerous times over the past 100+ years, but it’s easy to spot when individuals are “all dressed up” for a special occasion—regardless of the era. Here are some examples from the WNP/OSFH photo archives of people from the Western Neighborhoods who were stylishly well-attired for the passing photographer from the 1890s until present times. 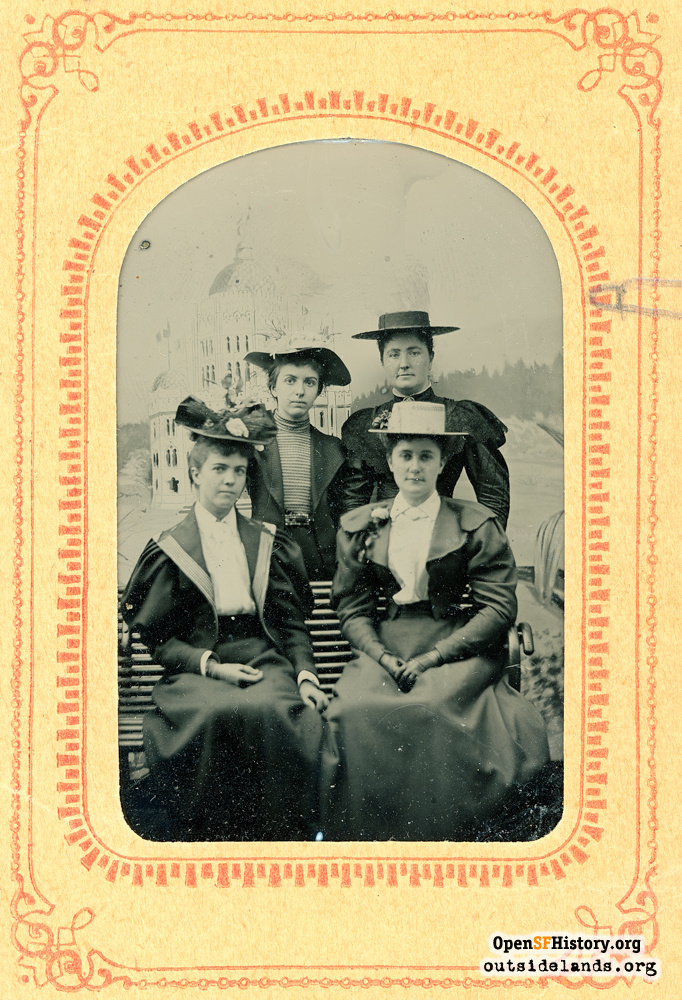 Studio tintype with four women, 1894 - Marilyn Blaisdell Collection / Courtesy of Molly Blaisdell.
These four ladies were clearly wearing their finest at the Midwinter Fair of 1894 in Golden Gate Park. 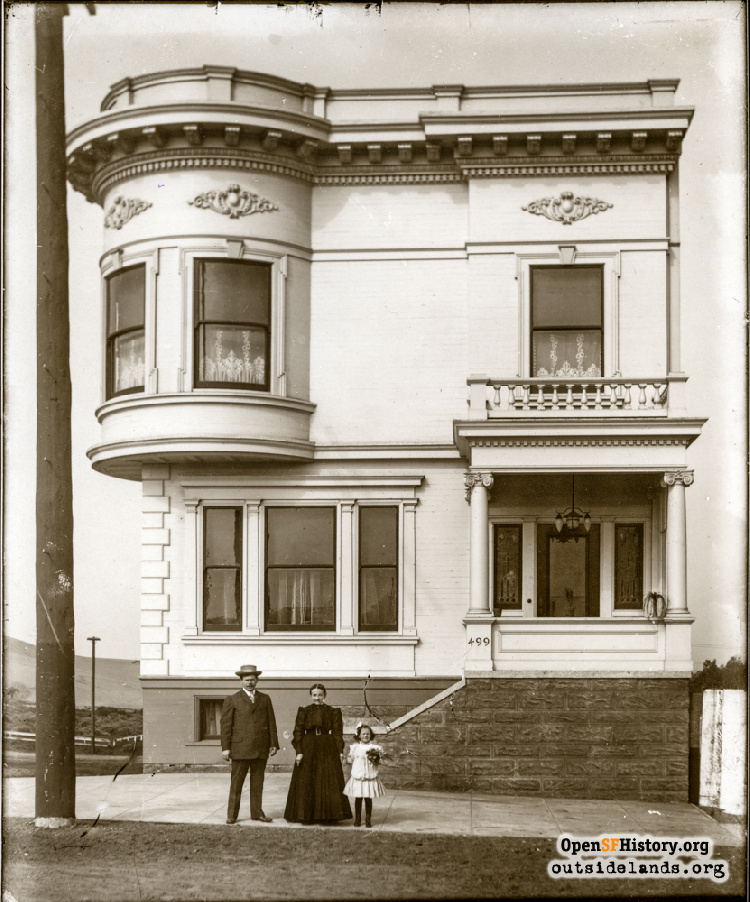 Family in front of Billington residence at 499 11th Avenue, circa 1915 - Courtesy of a Private Collector.
This family stands in front of the Billington home at 499 11th Avenue at the northwest corner of Anza Street in the World War I era. The house, built in 1913, was originally the home of one of the Billington brothers, who had a photography studio at the Cliff House. Though remodeled with a stucco exterior sometime after this image was taken, the house retains the same lines today. 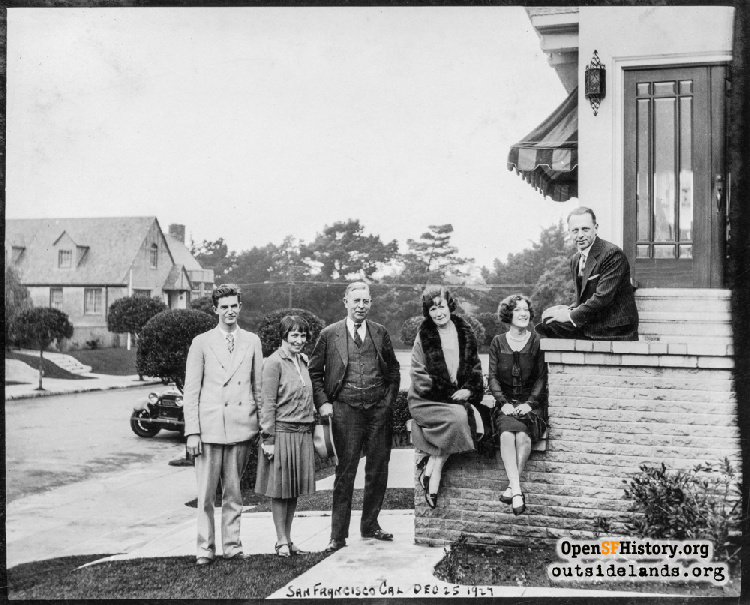 Family posing in front of house at 29th Avenue and Lincoln, December 25, 1927 - Courtesy of a Private Collector.
Family members pose on Christmas Day of 1927 outside a house on 29th Avenue near Lincoln Way. 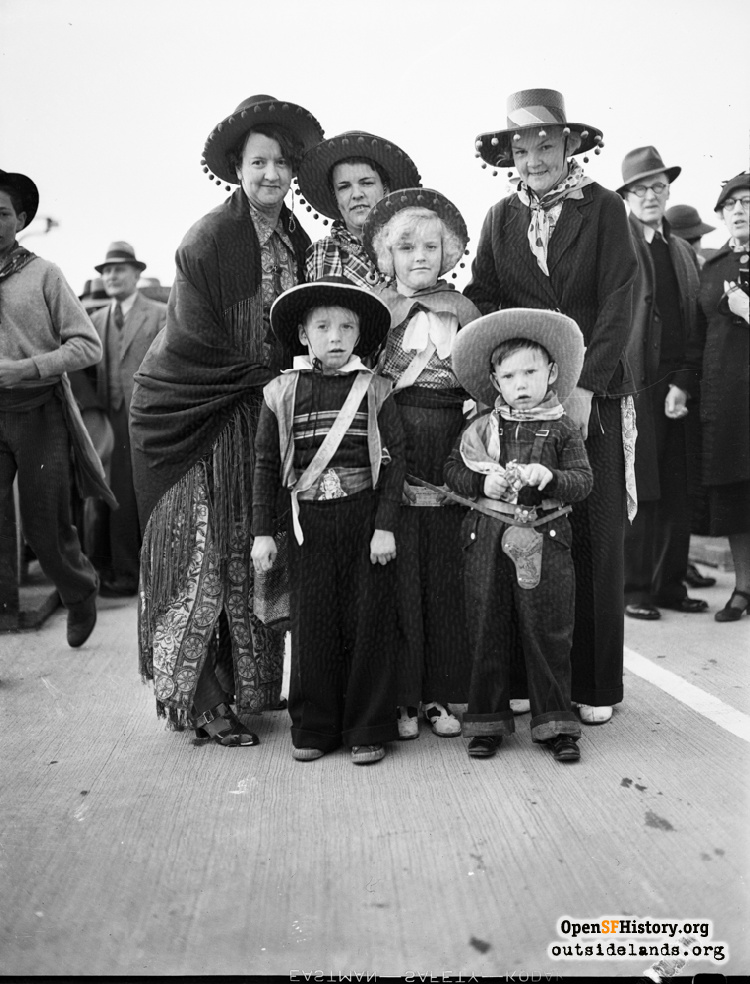 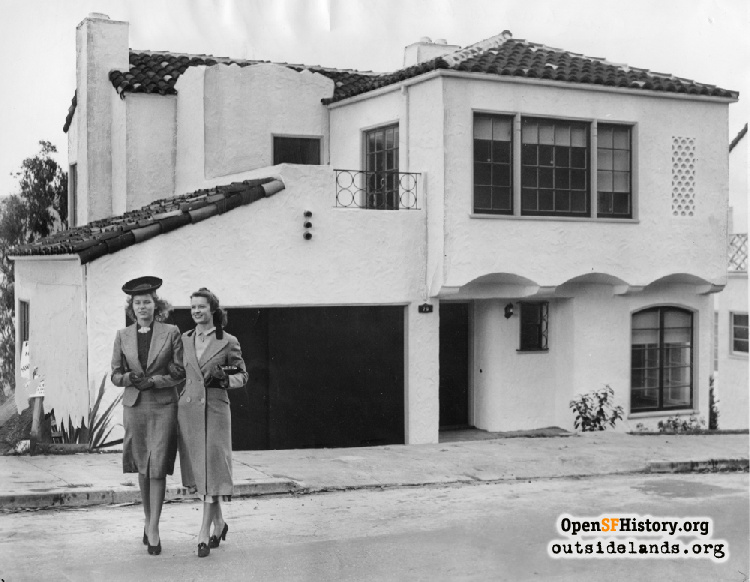 Two women posing in front of home for sale at 70 Miraloma Drive, October 1938 - Courtesy of a Private Collector.
Two stylishly dressed ladies outside a new home on Miraloma Drive near Juanita Way in 1938. The house has undergone only minor alterations in the past 84 years. 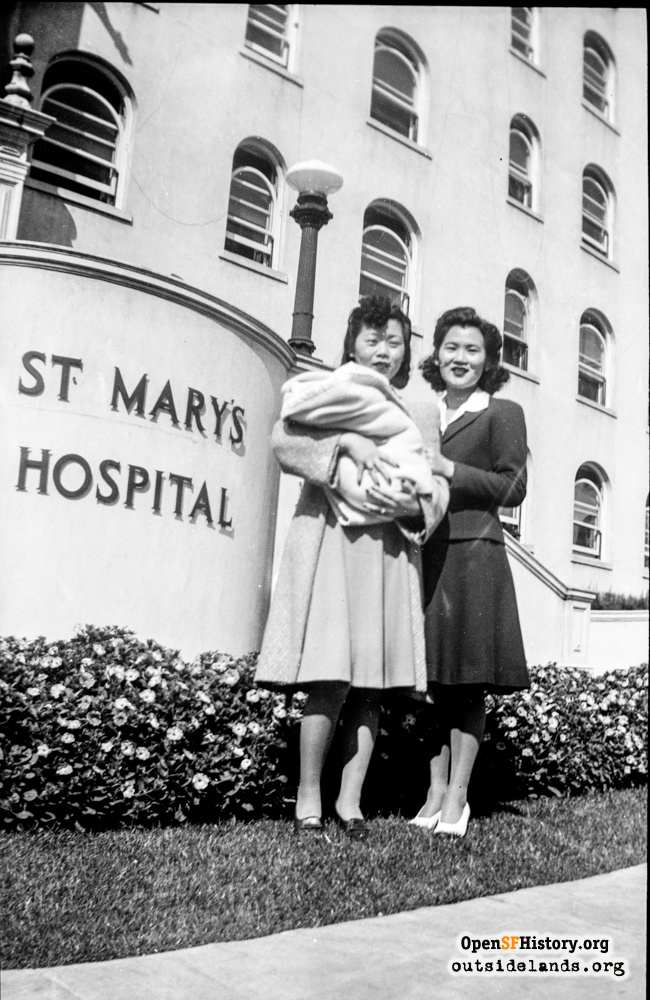 Two women and baby outside of St. Mary's Hospital, circa 1940 - Courtesy of a Private Collector.
Two smartly suited ladies pose with an infant outside St. Mary’s Hospital—circa 1940. The hospital has operated in multiple San Francisco locations since the 1850s, and a much larger 1970s-era hospital building occupies this site today. Learn more about the hospital’s history and see many more vintage photos here. 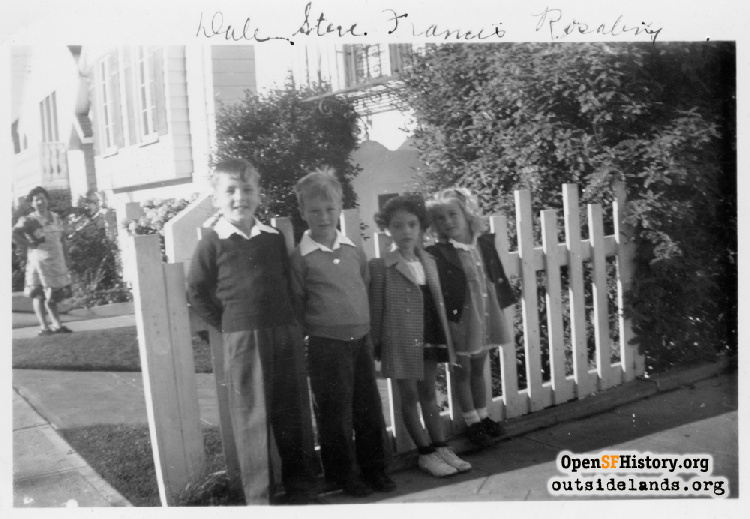 Kids posing in front of house, September 6, 1945 - Courtesy of a Private Collector.
First day of school for Dale, Steve, Frances, and Rosaline on 35th Avenue near Moraga in 1945, with an observant neighborhood Mom carefully overseeing the scene. Back-to-school clothing was often purchased in late August in response to over-the-summer growth spurts of children. The fence and most of the neighborhood lawns have vanished from this block in the last 77 years. 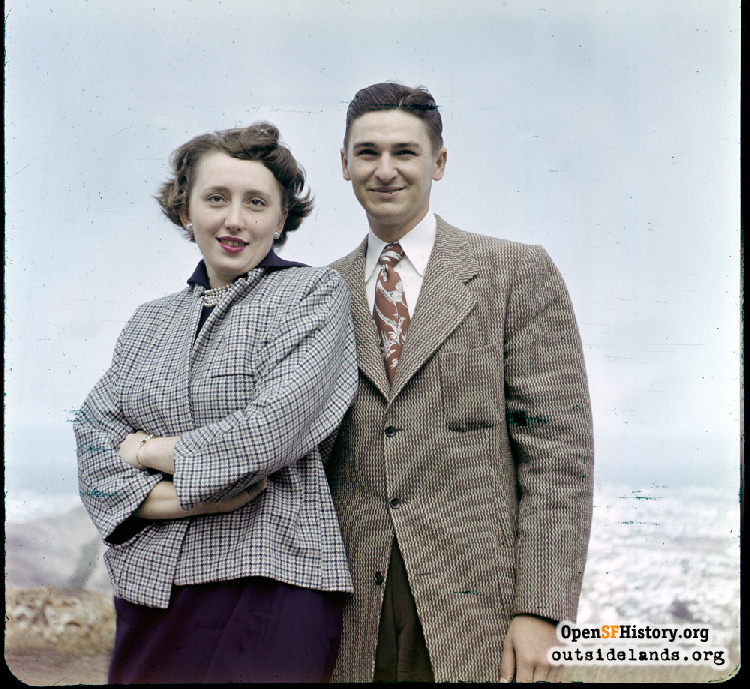 Couple posing on Mt. Davidson, circa 1949 - Courtesy of a Private Collector.
A smiling couple posing in what was then casual sportswear on Mount Davidson sometime around 1949. 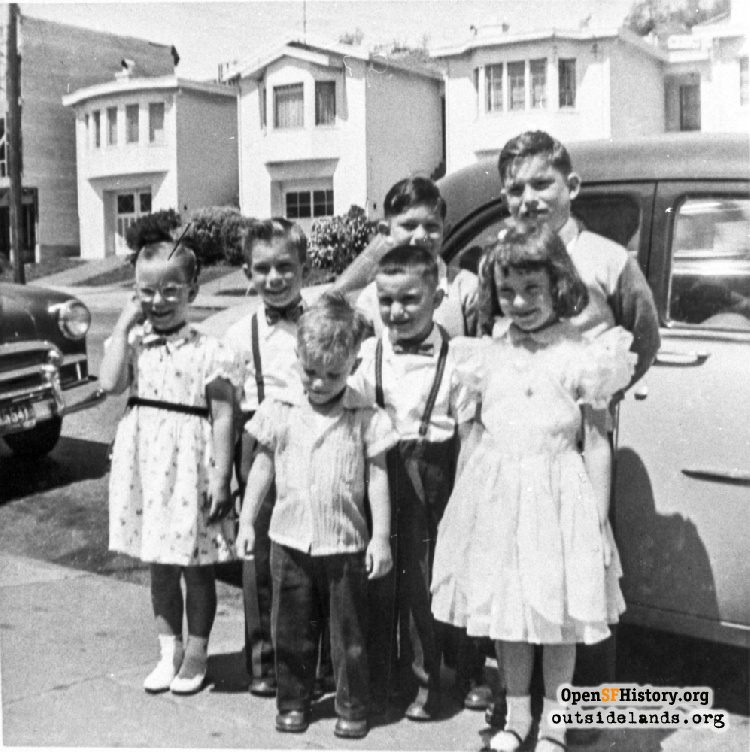 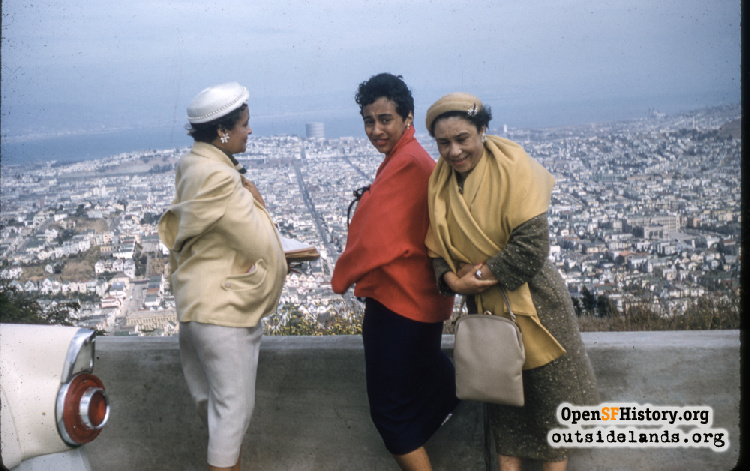 Women wearing shawls oat Christmas Tree Point on Twin Peaks, circa 1956 - Courtesy of a Private Collector.
Three well-dressed ladies viewing the sights of San Francisco from atop Twin Peaks on a windy day back around 1956. 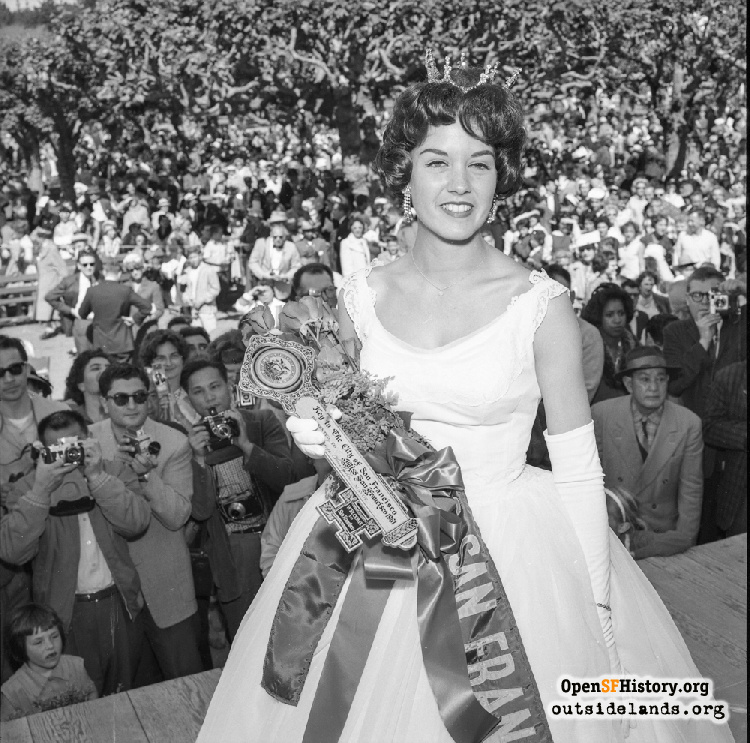 Lana Green posing for pictures after being crowned Miss San Francisco at Golden Gate Park bandshell, May 7, 1961 - Courtesy of a Private Collector.
The new Miss San Francisco, Lana Green, poses for photos amid an enthusiastic group of well-wishers after receiving her title at the Music Concourse in Golden Park on May 7, 1961 when she was listed as being 18 years of age. 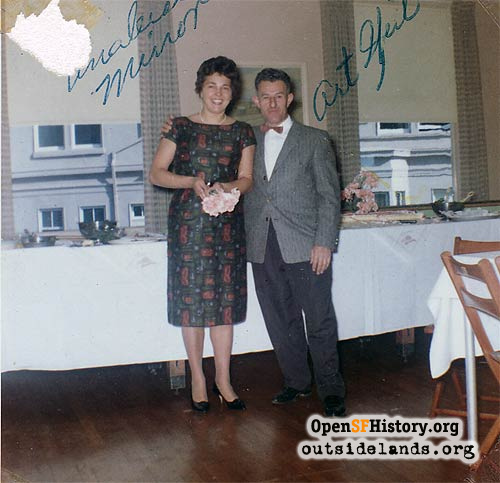 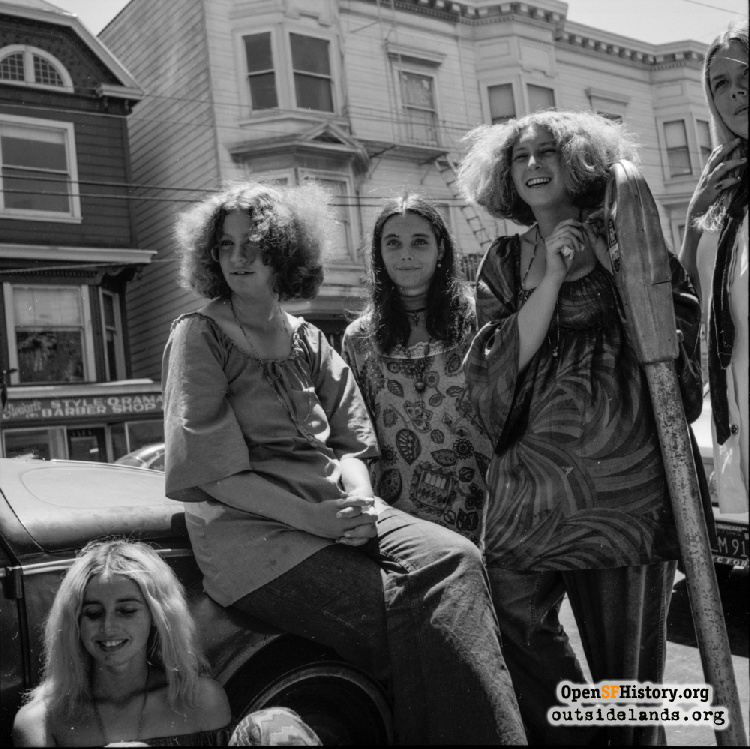 Women in front of Stewart's Style-O-Rama on Haight Street, circa 1967 - Courtesy of a Private Collector.
It was the Summer of Love on Haight Street near Shrader, circa 1967, and these young ladies were attired in bold print patterns that were the height of fashion at the time. 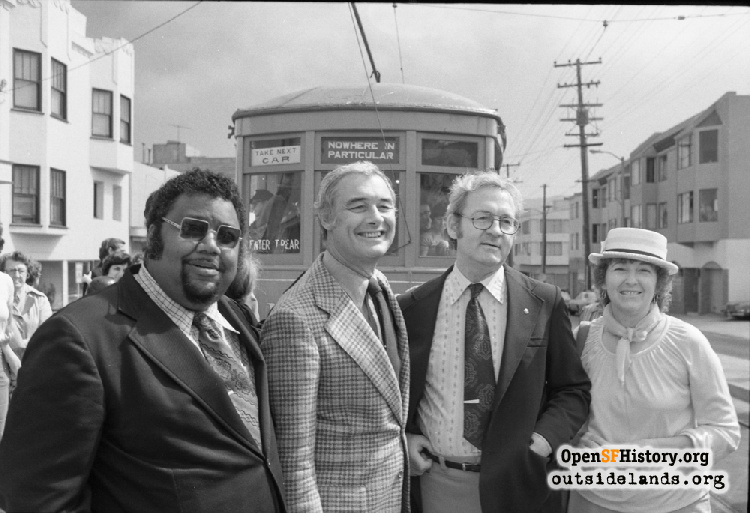 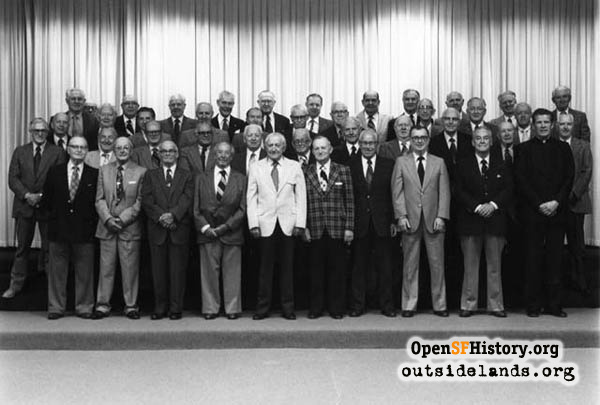 The Knights of St. Cecilia, 1980 - Courtesy of Rita Ann Smith & Jo Anne Quinn.
The Knights of St Cecilia group was formed by retired parishioners in 1980 in order to provide security in the church building at 17th Avenue & Vicente Street during open hours, and it soon included women members as well. The Pastor at the time, Monsignor James P. McKay (front row, far right), a Richmond District native, recently celebrated his 92nd birthday. The group, now staffed with all new members, remains active today. 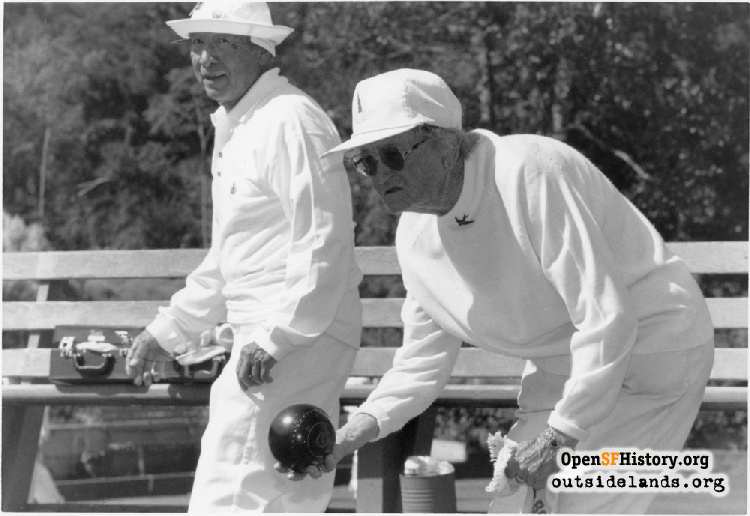 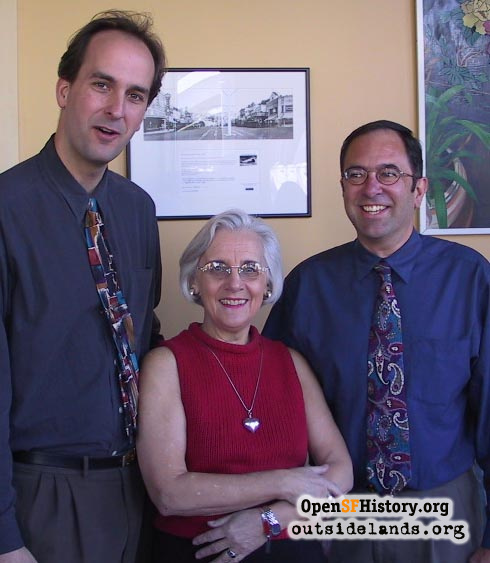 Woody LaBounty, Mae Silver and Richard Brandi at WNP reception for the West Portal history walk, 2002 - Courtesy of David Gallagher.
A smartly dressed group of WNP members, including founder Woody LaBounty at left, at a West Portal Walk event in 2002. 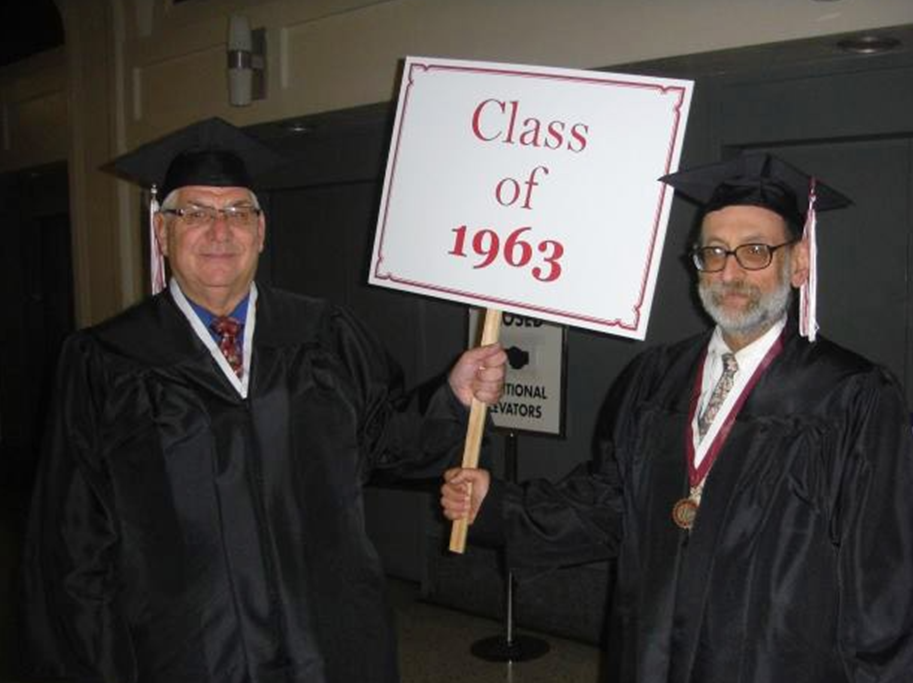 Lowell High School alums celebrating the 50th anniversary of their 1963 graduation, 2013 - Courtesy of the Rosenberg Family.
Two well-dressed members of the Lowell Class of 1963 celebrating their 50-year reunion in 2013—the first class to graduate from the Lake Merced campus. At right is long-time WNP member, the late Paul Rosenberg.