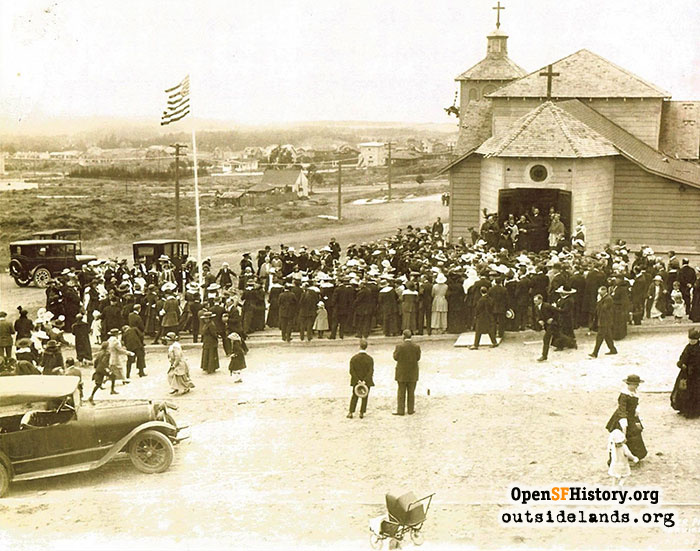 History and memories of St. Cecilia’s Catholic Church in the Parkside District. 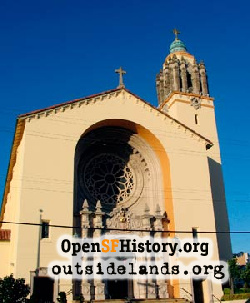 "The finest, the greatest and the best."

Any child who attended St. Cecilia's Grammar School between 1946 and 1976 will automatically remember that third Pastor, Monsignor Harold E. Collins, bestowed this concise and accurate appellation upon their parish. St. Cecilia's started out in a small three-level house on Taraval Street. Today, it is a magnificent edifice in the Parkside neighborhood, along with a large and thriving grammar school, and adjunct structures.

On January 7, 1917, the new parish of St. Cecilia was established. Former Mission Dolores Assistant Pastor, Rev. John P. Tobin, was appointed first pastor. The boundaries of the parish extended from the ocean on the west, to Twin Peaks on the east, and from Pacheco Street on the north to Balboa Terrace on the south (including what eventually became St. Francis Wood, Merritt Terrace, West Portal, Forest Hill, and the Parkside District). The area primarily consisted of very wild sand dunes and very tame vegetable gardens. A modest two-story residence, plus its street level garage at 1215 Taraval Street (near 22nd Avenue), served as the rectory (top floor) and the church (second floor).

Church attendance rose swiftly, and the small chapel could no longer accommodate the congregation. A sand lot on the northwest corner of 15th Avenue and Taraval was purchased, and the old two-room building that once served as the Parkside School was moved onto the lot. The Parkside Fire Department donated a bell. 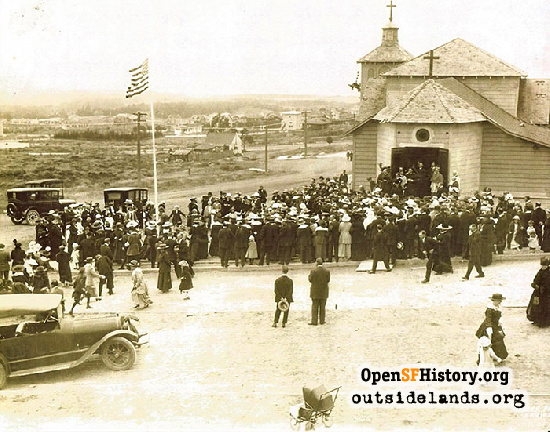 By 1926, a site for a larger church was needed. Property on Vicente Street between 17th and 18th Avenues was purchased from Carl Larsen (of Larsen Park fame). In 1927, the Parish Hall (then located at 16th Avenue and Taraval) was moved onto the property to serve as the church.

Father Tobin passed away in 1929. As he had requested, he was buried in the Potter's Field at Holy Cross Cemetery, beside the poor he had served at Laguna Honda Home. John Tobin is truly the Founding Father of the parish we know today.

Father John Harnett became second pastor. In 1929 the parish was "subdivided" and St. Brendan's was born. Father Harnett built the grammar school in 1930, and invited the Sisters of the Holy Names of Jesus and Mary to educate the students. He erected a spacious convent for their living quarters. In 1941, a further subdivision saw the emergence of St. Gabriel's. Our second pastor passed away in 1946, and Monsignor Collins was appointed third pastor.

The years Monsignor Collins served were surely the glory years, with the expansion of the school to accommodate ever-increasing enrollment, and a second "lower church" created out of the hall under the main church. 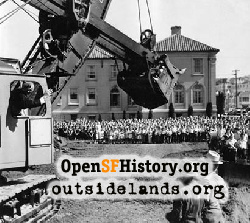 Monsignor Collins directs a steam shovel for the groundbreaking of the new St. Cecilia's Church, May 31, 1954. -

Monsignor Collins' crowning achievement was the construction of the church we are familiar with today, which began in 1954, and ended when the cornerstone was laid in 1956. In 1954, the students had the thrill of watching Monsignor Collins dig out the first pile of dirt on the building site---not with a hand shovel---but rather supervising the operation of a large industrial shovel. (Your author was one of those thrilled kids.) In 1956, the students were invited into the new church the day before it was consecrated. Our beloved pastor ordered the organist to play his favorite song, "Roll Out the Barrel," much to the surprise and delight of his young audience. This fun-loving gesture was typical of Monsignor Collin's jolly and playful personality. He always had jellybeans in his pockets to share when he visited the school, and is remembered by the boys for his 1958 green and white Oldsmobile. He outfitted the car with a "ding dong" bell or an "ahoogah" horn (there is some room for debate here). He also installed a floorboard button. When pressed, it emitted a noise much like an old-fashioned slide whistle. This startled more than one Mom walking down Taraval Street to buy her groceries! As further proof of his occasional cheerful irreverence, a child once asked him what the Ph.D. behind his name stood for. With a naughty grin, Monsignor replied, "Pretty heavy drinker."

Monsignor Collins retired in 1976, and his assistant, Monsignor James P. McKay became fourth pastor. In 1979, Monsignor McKay oversaw the opening of the Harold E. Collins Center, which must have pleased our third pastor very much. In 1990, Monsignor McKay was promoted to Vicar General of the Archdiocese of San Francisco and Monsignor Patrick O'Shea became fifth pastor. At present, Father Michael D. Harriman serves as sixth pastor.

Monsignor Collins passed away in 1980 at Nazareth House in Terra Linda. Of all the pastors, he is the one who will remain in the hearts and minds of the Baby Boomers, whom he always referred to as his "Little Pigeons." We were blessed to grow and learn under his fatherly guidance and tender care, with loving and motherly assistance from our cherished Sisters of the Holy Names. St. Cecilia is an admirable parish, but it is these selfless and devoted servants of the Church who were, in truth, "the finest, the greatest and the best." 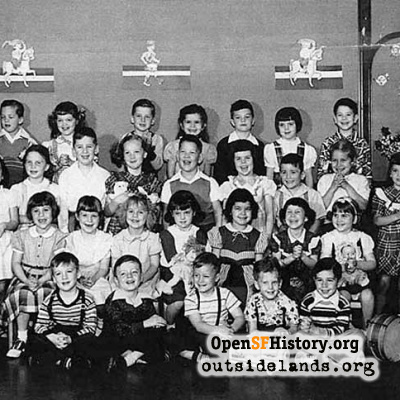 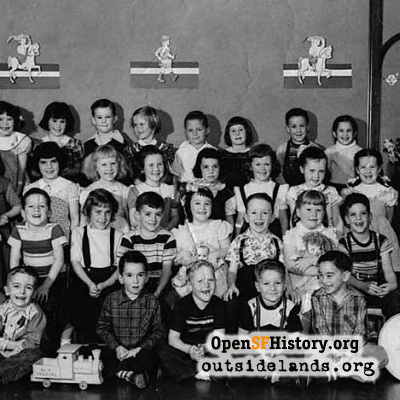