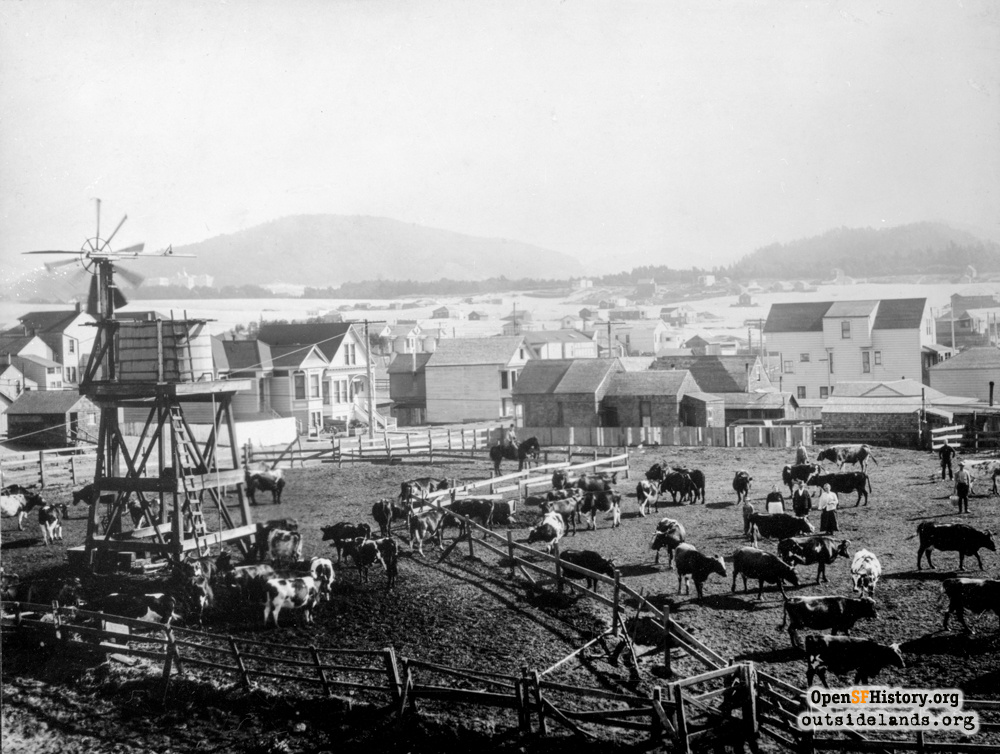 The Oxford American Dictionary named "locavore" the word of the year in 2007, and the popularity of food grown locally and sustainably has only increased over the past four years. Many of San Francisco's small parking lots are now filled with farmers' markets on the weekends. Neighborhood agriculture has taken over land in Hayes Valley where the Central Freeway once loomed. I know people who not only tend vegetable gardens behind their Sunset District row houses, but raise ducks and hens as well. An omelet-lover, I've certainly enjoyed the bounty of a few backyard flocks.

Despite the new urban agriculture movement, farms and cities still feel incongruous, even opposing. The apparent disharmony made for a memorable Berkeley Farms advertising slogan in the 1970s, and every time I open a carton of milk I still think "Farms in Berkeley? Mooooo!"

Even back in 1903, the San Francisco Chronicle thought the strangeness of farms in the city limits deserved a feature article. Lillian E. Purdy, the reporter for the article "Farms in the City Limits of San Francisco," (published in the newspaper on March 8, 1903), focused on animal-husbandry operations for her piece. The large vegetable farms that stood on the edges of Lake Merced and around the creeks and ponds near the Ocean View neighborhood didn't merit mention. With the exception of the tiny ranch of a Mrs. Stahl on Arkansas at 17th Street (3,000 ducks, 500 chickens, several hundred pigeons, a few goats, a dozen hounds, numerous cats, and fifteen canaries!), the farms featured were all in the western neighborhoods. 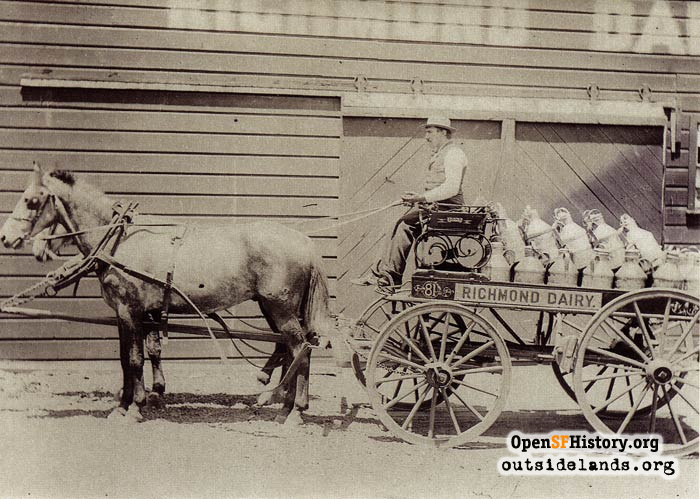 Ruhland's Richmond Dairy, which operated between Point Lobos Road and Clement Street, 31st and 32nd avenues, in the 1890s. The family later ran a brewery and hardware store in the area. -

Thomas Mahoney showed off the seventeen pigs of his hog ranch near 14th Avenue and Judah Street. Mahoney had procured his original stock from an English ship in 1866, and added new bloodlines by occasionally trading a hog with the Alms House over the hill (today the site of Laguna Honda Hospital). After twice being pushed farther west by the growing city, Mahoney had established his Inner Sunset hog ranch in 1891. He declared the business a cheap one to operate, as he collected more than enough food for his herd by trolling for refuse left out in the neighborhoods of the Western Addition.

Over in the Richmond District, Charles K. Harley bragged that his dog kennels (which Purdy described as "among the greatest novelties in the farming line") near 25th Avenue and Lake Street ranked as the best west of Chicago. Harley had only started the "Wandee Kennels" the year before, but a good fifty dogs were already in residence. The dogs Harley raised were apparently show dogs, Fox Terriers. Wandee Kennels dogs won awards as far away as the Long Island Kennel Club show back east, according to an article in the November 13, 1903 edition of the New York Times.

Just a few blocks east, at the intersection of 21st Avenue and Clement Street, stood one of the pioneer dairies of the area. Theophilis Paton (misspelled in the article as "Patten") ran thirty-three head of cattle in the middle of the growing residential neighborhood, pasturing the cows on open hills nearby. Paton had started the dairy in 1880, when Point Lobos Road (Geary Boulevard today) was the only path out from the city and not another building stood within a mile. "The life of this dairyman as he galloped over the hills to collect his cows, smacked of that of the cow punchers."

Paton's dairy, sometimes called the "Old Park Farm" or "Richmond Dairy" (there was another dairy about ten blocks west that also went by that name), closed in February 1909, recognized as the last of the Richmond District dairies. Housing filled the land by 1913. 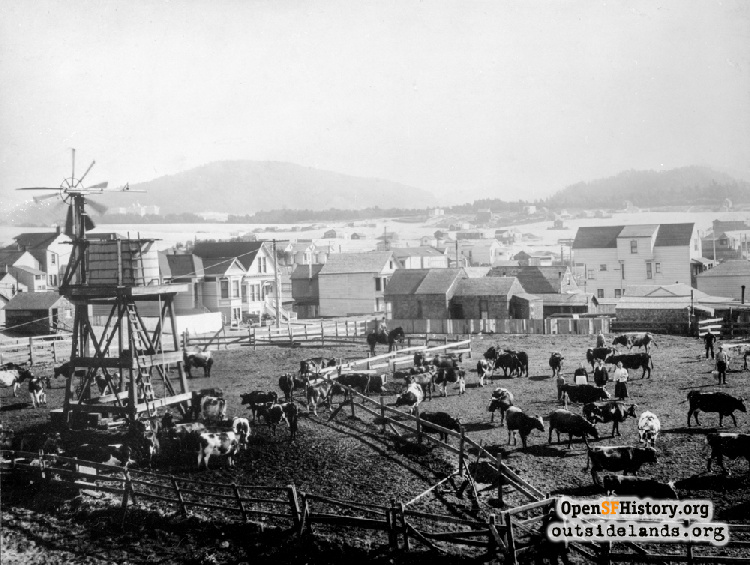 Thanks to Jan Black Owens for tracking down information on the Wandee Kennels.