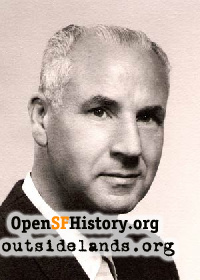 Written by Rosalie Savano and contributed by Jo Anne Quinn

(In 2010, the St. Cecilia Class of 1960 newsletter featured a story about classmate Rosalie Savano's father, Sam Savano and his luggage shop in West Portal. Here is Rosalie's story.)

My Dad, Sam Savano, and a good friend, Ray Schiller, started their business in Ray's garage on 25th Avenue near Taraval. This was during the Depression in 1933 when work was hard to find, and no one else was offering custom-manufactured salesman sample cases. These cases were fashioned with a black sheet material called fiber, which was bendable using a special machine. He would then rivet corners and handles on these cases. As he told it, he made his "bread and butter" in this trade.

I don't know when Dad obtained the store on West Portal Avenue—to be named "Savano Luggage"—but in 1950 my parents looked for a home in the West Portal area. They were thrilled to find one just 2½ blocks from the store and Dad loved his walk to and fro. Mom (Carmela "Nellie" Savano) didn't know how to drive so she was delighted with the proximity of West Portal's shops.

By then, he was in business for himself. He not only had a room for all his machinery, and a desk for Mom to do the bookkeeping, but also a showroom where he sold ready-made luggage. I remember his little demonstrations of how sturdy the Samsonite luggage was—it was his favorite brand and he referred to as "my Namesonite." (I always thought he had a cute sense of humor!) He also carried Grasshopper garment bags—large plaid canvas soft-sided luggage that become very popular. He would demonstrate how to pack these suitcases and garment bags so that the clothes wouldn't get wrinkled. He offered women's leather purses, and also wallets, leather key cases, and manicure sets½all Rolf or Buxton. In rear of the manufacturing area was another room with a small closet that was used for storing new luggage in their boxes. Behind that room was a bathroom and also a little kitchen with a fold-out wall table, sink, icebox, and a Wedgewood stove. Mom would walk to the store each day bringing lunch for both of them. During the Christmas season, the store stayed open until 9pm. Mom would come down, cook dinner in the little kitchen, and we would all eat there instead of at home.

When it got busy, she would help with customers and my job was gift wrapping—which I loved. My brother Tom worked with Dad in the manufacturing area, which was the most profitable part of the store. Aside from the sample cases, Dad was also well known for his ability to make specialized cases for musical instruments. These specialty cases were made of a wooden shell, lined in felt and covered in a leatherette material. Before mass-manufactured cases came out, they really were something! He also specialized in the repair of luggage and just about anything leather.

Dad semi-retired around age 65 and turned the business partially over to my brother, but he still couldn't keep his hands out of it. He passed away at age 68. The store closed its doors in the mid to late 1970s.