Pioneer Markets of the Outer Sunset

Pioneer Markets of the Outer Sunset

Mom-and-Pop markets are still part of most San Francisco neighborhoods. Walgreens and 7-Eleven give them stiff competition, but the tiny stores’ licenses for hard-liquor sales, deli counters for sandwiches to go, and personal connections to customers keep places such as Charlie’s Market, Art’s Western Market, and Great Highway Market open for business.

In addition to being a place to grab a pack of smokes or a six-pack, these smaller markets played an important role in the development and growth of the neighborhoods along San Francisco’s Ocean Beach.

Before the rise of the personal automobile, nearby grocery stores, butcher shops, bakeries, druggists and dry-goods stores were essential requirements. Filling the gaps, men drove trucks and wagons up and down the avenues delivering milk, hawking produce, selling needles and sharpening knives. Outside of formal wear and furniture, most everything a household required could be obtained within a few blocks.

At the dawn of the 20th century, the Outer Sunset district hadn’t developed enough to have the panoply of small businesses other city neighborhoods could rely on. Most streets existed only on maps, and miles of sand dunes and poor roads separated the cluster of tiny cottages, weekend rentals and horse-car cottages from the city proper. So the enterprising men and women who opened the first markets near the beach had to be butcher, baker — and possibly moonshine-maker — for the community. 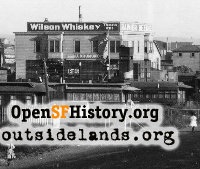 John Brumund started with a saloon on the Great Highway in 1898, serving refreshments to weekend bicyclists, and ended up selling groceries as well as “hardware, paints, oils, crockery, glass and household goods of every description.” By the 1910s Brumund’s store had also become a real-estate and rental business, neighborhood post office, and community social hall.

A.E. Harnish opened his own catchall store at 4314-4316 Judah Street around 1903. The signage on the front windows and walls advertised “teas & coffees, bakery & notions, groceries and provisions, fruit and vegetables,” as well as beer and an express delivery service (by horse-drawn wagon). Harnish took orders for meats and offered wines and liquors “for medical use.” On Sundays, when the recreation-seekers hit the beach, the store served lunches. 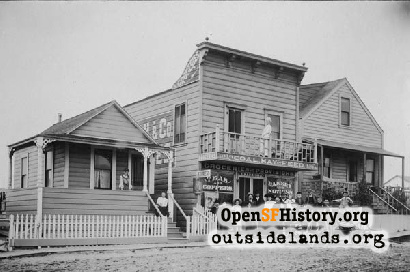 As its worn wooden floorboards testify, Your Market (My Deli) at 1460 48th Avenue is a survivor from those early beachside market days. Opened in 1907, the grocery was run for many years by Charles and Henry Bruecker, and despite the official name of Quality Market, most locals called it “Bruecker’s.”

Advertising in the neighborhood newspaper with the slogan “We believe the future better yet,” the Brueckers listed in 1925 that Quality Market offered fresh vegetables, “stall-fed” meats (today we like our animals free-ranging and grass-fed, but times change) and fish on Friday. Two delivery runs to neighborhood houses were made every day, rain or shine. 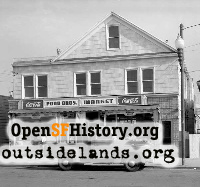 1460 48th Avenue market when it was run by the Pond Brothers in 1951. - San Francisco Assessor's Department

“If it wasn’t for that store, I wouldn’t be here today,” longtime neighbor Frances Larkin remembers. “Every bit of food that went in my mouth to sustain me came from Bruecker’s.”

Frances grew up around the corner from the store in the 1930s. She recalls that Henry Bruecker’s girlfriend, Miss Rector, lived across the street from the grocery and did the store’s books in a little room in the back (a room that is still there). She remembers how the Brueckers allowed neighbors to keep a tab at the store between paydays, and how Jake, the Brueckers’ butcher, would give a complimentary bologna slice or hot dog to the local kids. “At Christmas time they sold trees, too. They had everything.”

The stores that Brumund, Harnish and the Brueckers operated ranged in size from 1,000 to 3,000 square feet, and yet the residents of the Outer Sunset from the 1890s to the 1940s thought these markets had almost everything they needed. Today a Target or Walmart store, also trying to carry every necessity, can be as large as five acres.