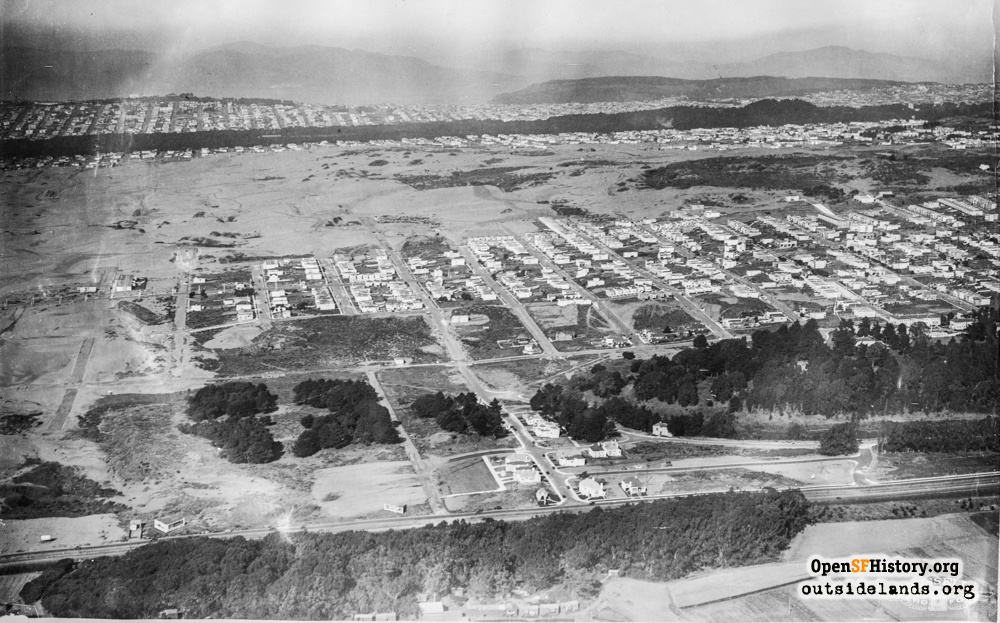 The Parkside Realty Company made a neighborhood in terra incognita.

In 2002, an old-timer bought me a beer in Fahey's bar and we got to talking about the older businesses along Taraval street. I asked how long he lived in the Parkside and he gave me a canny sideways squint.

"You grew up out here," he nodded, "otherwise you'd have called it the 'Sunset'. People forget that this is the Parkside." 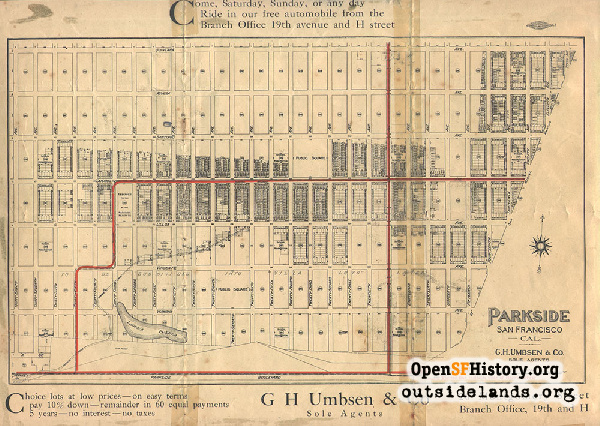 The Parkside as a neighborhood started in July 1905 when a syndicate led by William Crocker announced they had quietly bought land from the estate of Adolph Sutro and others to create a new million-dollar development. The "park" of Parkside was not Golden Gate Park, but rather the stand of trees and plants around Laguna Puerca (now called Pine Lake, and often called "Mud Lake" by old-timers). The area's remoteness at the time is obvious in this quote from a San Francisco Chronicle article announcing the purchase:

"To most persons the land acquired by the Parkside Realty Company is a terra incognita. It is popularly supposed to consist in part or in whole of sand dunes, whereas as a matter of fact, it is composed of pasturage and wood..." 1

This was some optimistic marketing. Except for the eucalyptus and bunch grass, most of Parkside was sand dunes.

The first homes in the development were built in clumps of four, near today's Stern Grove: cute shingled cottages for "workingmen" that mostly survive today. 2 The first residents felt like pioneers in the wilderness:

"…those who had taken up homes in this beautiful section were compelled to walk to their places of abode from the street cars in utter darkness for there were no street lights to guide them, and scarcely any mark by which one street could be distinguished from another."
—H. H. Dobbin, Sr., 1910. 3

Like other neighborhoods south of Golden Gate Park and west of Twin Peaks, the Parkside is generally lumped into the Sunset District. But where "Sunset Heights," "Parkway Terrace," and "Oceanside" have almost completely faded away, the Parkside name still gets used, and many residents hasten to point out their autonomy from the Sunset.

The early residents of the Parkside—traditionally bounded by 15th Avenue on the east, 33rd Avenue on the west, Ortega on the north and Sloat Boulevard on the south—certainly had to fend for themselves. The Parkside of one hundred years ago was a land without streetlights or sidewalks, with more rabbits than human residents. It was a long walk in the dark across sand dunes to the streetcar line on Lincoln Way. Parksiders learned to band together and speak loudly to get changes.

In the first half-century of Parkside, residents formed the Parkside District Improvement Club and lobbied successfully for new streetcar and sewer lines, fire stations, parks, libraries, and schools. They held festivals, dinners, costume balls, and children's fairs to celebrate their community, and built one of San Francisco's strongest and most admired neighborhoods out of what was formerly an expanse of dune and scrub.

Fahey's bar turned into the "Dragon Lounge" on April 1, 2004, (some old-timers may have thought it was an April Fool's joke). The demographics of the population and the character of the neighborhood businesses keep changing but the priorities of Parkside residents—attractive homes, excellent schools, good public transportation and great parks—haven't changed in a century.