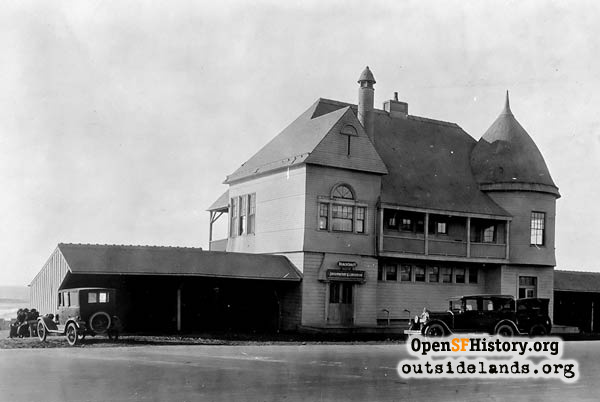 The Odyssey of the Original Beach Chalet

The drama and travels of San Francisco's first Beach Chalet.

The Odyssey of the Original Beach Chalet

The Beach Chalet on San Francisco's Great Highway dates back to 1925, but few people know there was a predecessor chalet that stood directly across from the current location, on the sand west of the highway. That original Beach Chalet had a fascinating history, first perched on the beach, and after, when it was moved twenty-five blocks east to serve as a clubhouse for the Sunset District Boy Scouts. 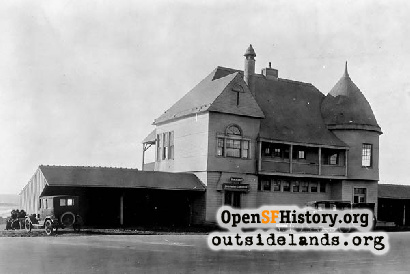 The Original Beach Chalet was built in 1892 on the west side of the Great Highway across from Golden Gate Park., circa 1920 - Jesse Brown Cook Scrapbooks, BANC PIC 1996.003, UC Berkeley

As Golden Gate Park developed in the 1870s, most of the landscaping and public structures were concentrated at the eastern end, near Stanyan Street. There were dirt roads leading out to the western end of the park and Ocean Beach, but little planting and no public structures for those who took carriage or bicycle rides to see the surf. There was the Cliff House on the bluff, and at its base, a roadhouse called the Seal Rock House, and next door the Ocean Beach Pavilion for dancing. All these early building were more associated with entertaining adults than providing genteel recreation for families.

In November 1891, the Park Commission let contracts for $8,000 to construct a building designed by architect William O. Banks to serve as shelter from the wind, provide bathrooms and changing rooms for bathers, and offer observation decks to watch the waves on one side and the developing park on the other. As the San Francisco Chronicle said, "it will be an elegant addition to the few structures which at present relieve the monotony of sand dunes."1

The new "House on the Beach" opened on Sunday, March 20, 1892. The building was described as "a two-story structure having steep roofs with ornamental gables in Queen Anne style." There were towers at each end of the building, one of which contained a staircase leading to the second or "observation" floor. "This is divided into a large lounging room, a reading room and toilet and dressing room for women," the Chronicle noted, making no mention of facilities for the men. One can only assume men were also provided a room for changing into their woolly swimming attire. The newspaper description continues:

The entire seaward side of the building is utilized as an observation platform and supplied with basket-shade chairs, stools, etc. On the landward side between the towers is located another platform, also well equipped with chairs. The building is designed especially for accommodation of ladies with children who wish to avoid the crowds at the Cliff House.2

The building was flanked at each end by low sheds for visitors to store carriages or bicycles during their visit.

In the early years, there was no clear identity for "The House on the Beach;" it was sometimes also called "The Observatory." By 1895, there were newspaper references to Chalet Beach at the end of Golden Gate Park, and the building there seemed to have developed a permanent identity, but not a firm foundation. The Beach Chalet got little notice in the press, except for the annual reports to the Park Commission, which listed revenue from food concessions at the Chalet and Sharon Lodge at the Children's Playground in the same category. The Chalet served "approved" refreshments, not alcoholic beverages, since that would be out of character for a building "designed especially for ladies with children."

After the 1906 earthquake, the Chalet was mentioned in the park superintendent's report on damage to structures in the park, and $2,000 was requested for unspecified repairs, most likely to stabilize the foundation. The location of the structure provided wonderful views and a comfortable place to get out of the wind; yet a building situated on the beach was constantly subject to the encroaching waves, especially during winter storms. 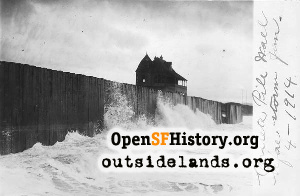 The city erected a concrete pile sea wall to try and protect the original Beach Chalet from the waves. -

By 1909, the Park Commission approved a plan to build a 300-foot breakwater to protect the Chalet and the Great Highway.3 The area just north of the building, near Fulton Street, was determined to be where the ocean tides formed the strongest eddy, a severe threat to the building and the highway. The plan was to separately pour thirty-foot concrete pilings and, when the pilings were cured, sink them into the sand, fifteen feet deep, and place them side by side to form a bulkhead, lashed together with railroad ties. In addition, large rock rubble would be placed in front of the pilings, with concrete poured to keep it all stable and hopefully deflect the waves. The first phase of the work was done in 1910. The entire seawall was completed in 1911.

The real test of the seawall came in January 1914. In the third week of January, a major storm worked its way down from Vancouver, sinking ships and destroying beach and harbor structures all along the Pacific Coast. Amazingly, thousands of people braved the wind and rain to journey to Ocean Beach, as the San Francisco Chronicle reported, "to watch the work of destruction that is being done by the heavy seas […] that have been pounding against the embankment along the seawall end of Golden Gate Park." The Chronicle continued:

Aside from the magnificent sight furnished by the heavy surf, interest centered in the heroic struggle which is being made to save the Park chalet from the hungry sea. Last night it looked as though the chalet was doomed. The breakers have eaten away the sand embankment up to the very walls of the chalet, and a number of the balcony supports have been washed out. Unless there shall be an immediate abatement of the storm and the high seas the chalet will be destroyed.4 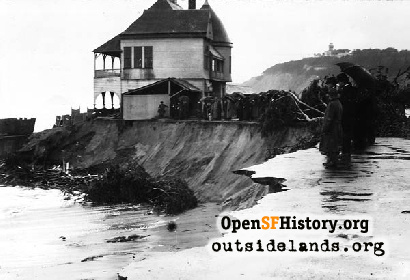 With a report like that, interest was piqued to see the Beach Chalet either be battered apart by the waves or maybe be undercut and become a floating two-story ocean vessel. The storm continued to be fierce the next morning, but by afternoon that Sunday, the storm passed and the sun peeked out from the clouds. As the Examiner said the following morning, "half the city turned out and forged its way to the Beach" below the headline reading, "Beach is Black with Crowd of Storm Thrill Seekers" and estimated the crowd at between 100,000 and 200,000 people. "News that the pounding breakers were tearing out the highway and the chalet observatory was in danger of toppling into the surf proved to be the biggest magnet to the enormous crowd." It went on to report that the storm had passed and the chalet observatory, with the aid of "a thick stockade of trees and brush lashed to shore with wire cables broke the force of the surf and the building stood fast and firm."5

This fierce winter storm was not unique and eventually another would destroy any structure placed that close to the surf. The Ocean Pavilion, Looff's Hippodrome and the emerging amusement strip and roadhouses further north along Great Highway would need a more substantial seawall, which was started in 1916.

The building that had been shaken and wiggled around a few times while on the beach would now get a serious shifting. In 1925, a new Beach Chalet, designed in the Spanish Colonial Revival style, would be built directly across Great Highway from the old.

Rather than demolish the old building, it was given to the Boy Scouts on the condition that it would be moved. Parks Commissioner Herbert Fleishhacker donated the money to have the building moved, and in the spring of 1925 the first floor of the original Beach Chalet was removed and it was moved along Irving Street to 24th Avenue. Five lots were secured on 24th Avenue between Irving and Judah streets, and the upper story was supported while a foundation and large assembly room was constructed beneath it. 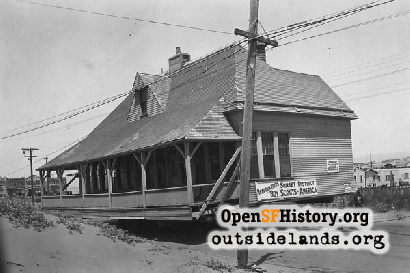 The new Sunset District Boy Scout Hall would serve as clubhouse for numerous troops, cub packs, and explorer posts for the next thirty-three years. Since the boys only used the building for evening meetings a few nights a week and community projects on Saturday, occasionally church congregations leased the building for Sunday services. During World War II, the Sunset Play Center Nursery School used the Scout Hall and remained there until 1952, when it relocated to Lawton Street and the Great Highway, where it remains today as the Sunset Cooperative Nursery School. 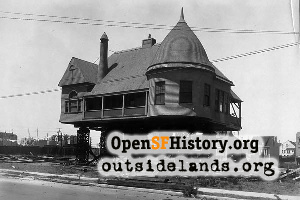 The final demise of the building the sea almost claimed came quickly. By the spring of 1958, the Boy Scouts sold the property to a contractor. On the evening of May 12, the first fire alarm came in at 6:00 p.m., and within eight minutes the fire had become a three-alarm blaze. The vacant wooden structure burned quickly and drew a large crowd of spectators. In its report of the fire the next day, the San Francisco Examiner said the fire was likely accidental because neighbors had seen children playing with matches in the dry grass and debris behind the building. 6

The property stood vacant for about eight years before the city built San Francisco Department of Public Health Center #5. The new clinic was called Park-Ocean Health Center, probably without anyone realizing that the first building built in Golden Gate Park on Ocean Beach had been moved to and occupied the 24th Avenue site for thirty-three years. 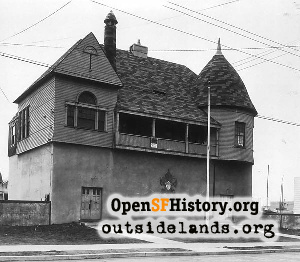