(We'd like to thank WNP member Jacquie Proctor, who provided us with these ads and history courtesy of the Miraloma Park Improvement Club. See much more on the neighborhood at http://mtdavidson.org/miraloma_park.) 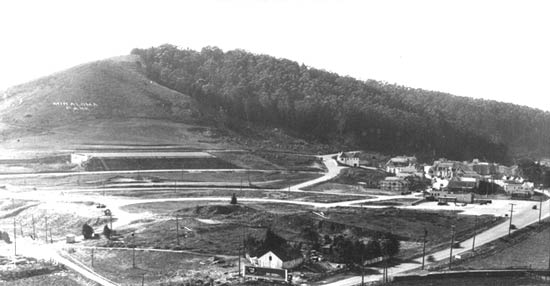 The new [city-designed] zone plan and [developer-designed] racial restrictions were in force in 1925 when Meyer Brothers bought the east slope of Mt. Davidson from the Adolph Sutro estate. They bought another 1650 home sites from Wells Fargo and Company for a total of 208 acres to meet their goal of a planned community of 2000 homes.

Miraloma Park was planned as an R1 zone of one-family residences of a maximum square footage and size. Houses were two or three bedrooms and one bath. Most of the lots were 25 feet wide with no space between houses. Open space behind homes had to be a certain size to allow for a green belt between streets. Lots were deep enough behind the houses for attractive landscaping, with the result that there would be parklike vistas behind the close rows of homes.

The entire tract of Miraloma Park was to be built up in units with services going into each unit just in advance of building. A well organized plan for integration of street construction, services installation and home building, with mass purchase and production of materials would result in homes within the means of the average family. The early homes of five and six rooms were to be priced at about $4500 in an attractive community adjacent to St. Francis Wood, already recognized as one of the most prestigious home centers in the Bay Area.

The streets in Miraloma Park were to be wide and curved to take advantage of the contours of the property. The homes were to be designed according to a variety of exterior plans but for best cost containment the interiors would follow a limited number of plans. The view side of each street was developed first. The area overlooked a side panorama on the south side of the city and the San Bruno Mountains. To the east were the forested Glen Canyon and a view of the East Bay.

Miraloma Park was out in the country surrounded by expansive views and hills covered with wildflowers. It was a place where kids played safely in the street. But Joel Bridgman, a real estate broker who grew up in the neighborhood, never forgot how he rode his tricycle down Teresita Boulevard when he was four. He crashed into a fire plug and bloodied his nose. Joel opened his office near his family home in Miraloma Park.

Connecting to the City

Since there was no convenient transportation, it was necessary to own a car. It was the beginning of the move to the suburbs which later stretched from Miraloma Park's few miles to twenty and thirty miles away around the Bay Area.

Transportation was a high priority when the Miraloma Park Improvement Club was formed in 1935. These early members wanted a bus line to Forest Hill station, the closest terminal to the Twin Peaks tunnel and downtown. Their reward for diligent effort was realized on July 23, 1939, when Mayor Angelo Rossi drove the first #36 bus over the route on Teresita Boulevard. The occasion was celebrated with a big parade of American Legionnaires, Boy Scouts and school bands.

The depression of the 1930's did not have a disastrous effect on home building and many continued to be sold. Homeowners who lost their jobs managed to keep their houses under a federal agency which extended mortgage payments and allowed them to be paid off at a lower monthly rate. One man on Rockdale Drive didn't suffer a loss of income. He ran a whisky still in his basement during Prohibition. His gas line was connected ahead of the meter, but PG&E had a monitoring device which showed an unusual increase in gas use every night. It was eventually traced to the bootlegger's house. The police broke up his still and dumped the mash in the backyard.

Half the homes in Miraloma Park were finished in 1940 when, true to their plan, Meyer Brothers built the clubhouse they had promised. It was located on Del Vale Avenue off O'Shaughnessy Boulevard and donated to the Improvement Club in a dedication ceremony on November 10, 1940. It was on land leased from the San Francisco Water Department and the rental has been $1.00 per year. The Department of Public Works graded the clubhouse parking lot in exchange for permission to store tools and equipment during the improvement of O'Shaughnessy Boulevard.

Simultaneous with the establishment of the Improvement Club, the Garden Club was started. It was expected that residents would maintain the landscaping of their property with as much care as they maintained their homes. At monthly meetings residents learned about the best plants to decorate their home exteriors in an area that was frequently cold, foggy and windy. Once a year there were prizes awarded for the most attractive landscaping and homeowners were encouraged to put up elaborate lighted displays during the Christmas season. The Garden Club worked closely with the Horticulture School at City College and hired students to design a landscape plan for the clubhouse.

By July 1946, the combined Garden Club and Improvement Club had a membership of 1,000, an unequalled record in San Francisco where every neighborhood had an association. Organized community groups had significant political power and unified citizen action kept neighborhoods upgraded. The Miraloma Park Improvement Club has always been vigorous in pursuit of benefits and prevention of negative influences.

Residents who have lived in the community for fifty years still remember with pride a feature about the planned community of Miraloma Park which appeared in the "Home Section" of the San Francisco Chronicle on April 20, 1941. An ad next to the feature announced "How to get a new kind of living--away from noise, the shouts of newsboys, honking horns and the shriek of brakes of downtown traffic." All during the fifteen year building period, Meyer Brothers had a model, decorated by the Emporium, open for showing to prospective buyers.

The article noted that the original plan included a business district large enough to supply the needs of 2,000 families. It was laid out in a two-block area on Portola Drive at O'Shaughnessy Boulevard at the northern limit of the neighborhood.

Before there was a grocery store in the business district, during the late 20's and early 30's, milk was available from George Christopher's dairy in Glen Park. His cows were pastured nearby along O'Shaughnessy Boulevard. Although convicted for watering the milk, thirty years later (in 1956) he became one of San Francisco's most popular mayors and served two terms.

Tower Market, an independent supermarket and anchor store in the Miraloma Park business district, opened in 1941 by Mark Pommon who had migrated from Greece just before the earthquake in 1906. After operating several small downtown grocery stores, he saw the opportunity to serve the growing communities around the top of Portola Drive. His son, Dan, started working in the store at age ten and entered into partnership with his father in 1945. When construction was possible after World War II, they rebuilt the store. In 1953 it was remodeled again to double the floor space. Dan Pommon has been president of one of the most successful independent markets in the Bay Area for many years now. [In 2005, Tower Market was purchased by the Mollie Stone chain.]

Construction in Miraloma Park stopped during World War II between 1942 and 1943. A hindrance to development occurred even before men and materials became scarce. On February 6, 1942, after a rainy winter, construction crews were cutting new roads on Mt. Davidson's southeast slope when the entire hillside gave way and crashed down on several homes. A river of mud one-half mile wide and fifteen feet deep trapped many residents in the 700 block of Foerster Street. One woman was killed.

When the war ended in August 1945, many military men who had spent time in San Francisco before embarkation or on discharge decided to live here. A housing shortage resulted in many small, illegal units being built in single-family homes in violation of zoning and building codes. Neighbors opposed having them legalized because of the lack of off-street parking for cars. Advertisements of "investment properties" for sale by realtors were strongly opposed by the MPIC.

However, attitudes toward racial prejudice among club members gradually disappeared as minority groups bought homes after 1950 when restrictions were outlawed. In 1954, Dr. Carlton Goodlett, a prominent Black activist and the publisher of nine Black Bay Area newspapers, bought a house on Los Palmos Drive. Many Black families followed him to the 500 and 600 blocks on that street. Calvin Simmons, the former young Oakland Symphony conductor, lived there. He could never heed his friends' call to come out and play football because he had to practice the piano. Abe Woodson, defensive back for the 49ers, lived on Burlwood and Willie Mays lived on Miraloma Drive next to St. Francis Wood.

As Asian-Americans moved into the community, language classes for children were established at the Miraloma Community Church and later, at the public school with a teacher hired by the School District.

The population went down in 1950 to 1970 from 4.2 persons per unit to 2.7. Although it has risen again, the community has changed less than any other neighborhood in San Francisco. Many people who bought houses as young homeowners have been in the neighborhood for 40 years or more and have continued to be active in the Miraloma Park Improvement Club which has been the unifying force in maintaining neighborhood character.

The major change in the past few years has been due to the steep acceleration of home prices. High salaried young professionals have paid $250,000 for homes which sold for $4500 when built. [In 2006, Miraloma Park homes can sell for over $700,000.] 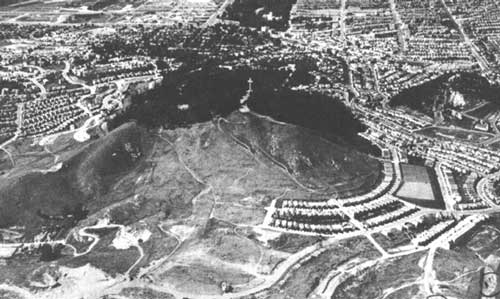