Located behind the Public Health Hospital, Presidio of San Francisco, near 15th Avenue and Lake Streets. 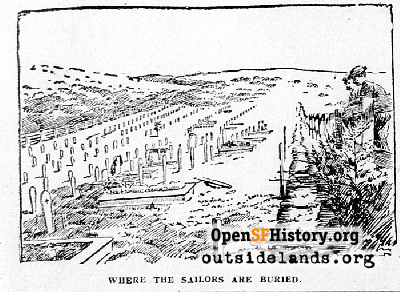 Location: Behind the Public Health Hospital, Presidio of San Francisco, near 15th Avenue and Lake Streets.

Closed: Sometime after 1932 (bodies not moved).

"The Marine Hospital cemetery was well known at the turn of the twentieth century. It was the subject of an extensive 1896 newspaper article, but by mid-century, it seems to have been almost forgotten. The administrators of the Public Heath Service Hospital decided to bury it beneath piles of debris, rubble, and fill, and to build a tennis court and parking lot on top of most of it. In 1989, during research as part of the baseline studies at the Presidio, the cemetery was, in a sense, rediscovered.

"The now-unmarked graves are still there, still buried under the tennis court and parking lot. Some are not far from the earth's surface."