One of the most elusive pieces of Sutro history has to be the 1958 film-noir movie "The Lineup" made inside the Sutro Baths. 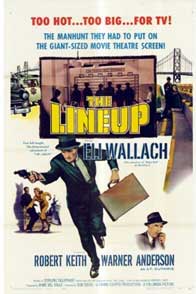 by John Martini
(Originally appeared in GGNRA's ParkNews. Thanks to Mr. Martini and ParkNews for letting us reproduce it here.)

One of the most elusive pieces of Sutro history has to be the 1958 film-noir movie "The Lineup" made inside the Sutro Baths. The only feature movie ever made at Sutro's, this crime drama provides a fascinating view of the structure in its waning years. Glimpses of the Baths preserved in the movie include the main entrance, the skating rink, a tracking shot down the promenade, the grand staircase and the Marine Deck where most of the filming took place.

Filmed in San Francisco and based upon the then-popular TV series of the same name, "The Lineup" was filmed at various locations around the City that included the Steinhart Aquarium, Pier 43, the Presidio, and Golden Gate Park. It even featured an embryonic car chase sequence on the unfinished freeways starting to snake their way across the skyline.

"The Lineup" was directed by the Don Siegel, one of the great Hollywood crime-film directors whose credits include the original "Invasion of the Body Snatchers" and a long association with Clint Eastwood that included "Dirty Harry" and "Escape From Alcatraz." Unfortunately, "The Lineup" didn't feature any top-name stars of the era (unless you're a member of the Eli Wallach fan club) and the movie was destined to fall into dustbin of movie history.

"The Lineup" was recently included in a film-noir retrospective shown at the Castro Theater, and San Francisco history buffs waited in the cold for a rare chance to see it on the big screen.

The problem for those of us who couldn't be there is that "The Lineup" has never been released on video and the only copies available are second- and third-generation duplicates made from late-night TV broadcasts.

If ever there was a candidate for a DVD version of a classic San Francisco film, "The Lineup" is it.

"Everything John Martini says about The Lineup (1958) is true, except one thing (and this is the good news): It has been shown several times within the last few months on Encore's Mystery Channel, complete, uncut, and commercial free, so it's not as elusive as it sounds, at least to anyone with cable or a satellite dish and a VCR.

"The chase sequences may not be as flashy as those in Bullitt, but they make more sense geographically. The unfinished freeway which figures in the movie's climax is none other than our old friend, the late, not so great, Embarcadero Freeway, which has now mercifully faded into history, leaving The Lineup behind as a film record of it while it was still under construction.

"Now if someone would just dust off all the original episodes of the TV show itself, which ran from 1954-1960... can you imagine what might be lurking in some of those little gems."

More discussion on The Lineup on our message board.